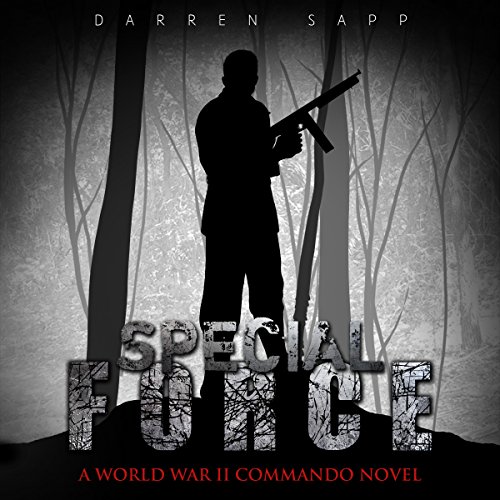 By: Darren Sapp
Narrated by: Patrick Freeman
Try for £0.00

For three years, the Nazis have held France hostage, terrorizing its citizens, and deporting Jews to work camps in the East. A company of brutal SS Panzer troops have taken over the City Hall of Caen and control the heartbeat of the city. Local bands of Resistance fighters operate in the shadows to disrupt, derail, and destroy German operations.

The OSS recruits Nick Jordan, an accomplished Yale athlete, to join an elite commando unit. He and his fellow candidates are put through a year-long training regimen at a covert base learning skills and tradecraft far beyond those of the typical soldier. Their initial mission, Operation Wolfhound, takes them into that German-held territory to seek and kill enemy forces in support of the D-Day invasion. The Nazis have never faced a weapon like Nick Jordan.

What listeners say about Special Force

Where does Special Force rank among all the audiobooks you’ve listened to so far?

A solid middle of the pack.

What other book might you compare Special Force to and why?

Aftermath: Invasion of the Dead, Book 1 by Owen Lucas Baillie because both books had fast paced character development, were both "book 1s", had a quick pace to the story line, and held promise for future works.

I had no particular favorite scent. The whole story line was good with a mix of action and background or set up for the next scene.

No. The story line was good but not one that made is such that I absolutely had to keep listening to. It was good in that I could put it down and pick it up at my leisure and yet keep track of what was going on and instant recollection of where I left off.

“I was provided this free review copy audiobook by the author." So first off yes, it was free in exchange for a review. The genre is one I enjoy so I was very interested in the subject manner. The character development, while not very deep, was enough to enable you to like or dislike the characters. The story line was consistent and flowed in a straightforward manner. It did change from character to character in the telling but was NOT confusing and was very easy to follow. I believe teenagers interested in WWII or war stories would find it a good read. The violence is what would be expected in a war story. It is not over the top and it is not particularly graphic. There is no swearing in it. I would call it a "clean" read. That helped me enjoy the story. There was no gratuitous sex, swearing or violence, as stated previously. Overall it was an enjoyable and entertaining book.

Well researched 'behind the scenes' around D-Day

This is a somewhat different WWII novel in that, although fictional, it runs parallel to what was actually happening during the days leading up to the allied invasion of France and is plausible enough to be considered "based on a true story." The listener is immersed in the struggles of the French Underground and the mutual support for and by American commando Nick Jordan in their effort to overcome the Nazi SS-led troops occupying the north of France at the time.

The characters are well developed in that one gets to know their backstories and how they led to their fated rendezvous in the town of Caen on June 6, 1944. This is a war story and there is the expected amount of killing, extracting of information, emotional loses, the strengths and weaknesses of those involved, and the lifelong impact war has on people. That being said, the violence described (though somewhat detailed) is never posed in a gratuitous fashion; it is simply the facts of life along the front lines . . . or just behind them.In fact, the most redeeming quality of the story IS the impact that war has on all those involved . . . even the heinous SS major and the ghosts that haunt him.

In my opinion, the key aspect that separates this listen from others like it is the narration by Patrick Freeman; he hits it out of the park on this one. His bring together the blend of characters with their French , German , English and American accents (not to mention both male and female) was nothing short of phenomenal. How he kept them straight and seamlessly spoke from one to the other is beyond me, but it made the listen come alive.

Although this audiobook was given to me as a gift by the author in return for my unbiased review, I would not hesitate to recommend this book for purchase or to spend a credit. It is certainly well worth the time and effort for those that enjoy war stories and this one would also serve as a decent learning tool for teens and young adults in realizing the price of war.

My hope is that this review will be found to be helpful for others in making their buying and listening choices.

One audible I highly recommend

We here of WW1 and WW2 and read testimonies of survivors in this story you hear about about brave Americans, British and Frenchman who in groups of four and five learn to live together, fight as one and in some cases die to free France from the Nazis.
The story is very well written and the narrator above board to bring the characters alive to the point you feel their happens they have a victory, pain when tortured the ultimate pain the death of a fellow fighter, friend or family member.
I will guarantee you a awesome story that will tug at your heart strings!

Darren Sapp is becoming one my favorite writers. It all started with Fire On The Flight Deck a must read if you served on a aircraft carrier.

I really enjoyed this story. I loved that the author made it feel so real and authentic. The details within make you feel like this is a true story. I would highly recommend this to anyone interested in period pieces especially WW2 books.

This was a good novel about OSS agents and the French resistance. I am looking forward to more of the same from this author. The narration was good and this was well worth a credit.

I very much enjoyed listening to the book.

I very much enjoyed listening to the book. This is one of the best one I've listened to

Would you listen to Special Force again? Why?

Interesting story of one man's journey from his days in high school to his choice of a career and then into war.

I really liked it

I received this book free from eblast. I really enjoyed it, a must listen. I liked how they layes out the fight scenes.

A reimagining of the start of the OSS with a college educated James Bond type hero in Nick Jordan. Jordan can be suave when needed...or he can be deadly. Already Yale educated and an elite athlete from a wealthy father who has plans for his son, Nick detours to the OSS to answer his own calling. There, he proves to be a special mix of hero and killer, able to negotiate or cause chaos to achieve his objective.

This story is the first Nick Jordan book and a good beginning to hopefully more stories about this privileged hero who has a heart of gold. In this adventure, Nick and his team are told to cause as much havoc and take out as many Nazi's as they can ahead of the D-day landings. Nick not only plans and executes his own mission, he helps a town liberate itself in the midst of the Normandy onslaught. Jordan also has to work to effectively neutralize an SS officer with a vendetta against the French people.

Patrick Freeman was an excellent narrator who was able to accomplish an authentic sounding southern accent and very good French, German, and English accents in this engaging listen.