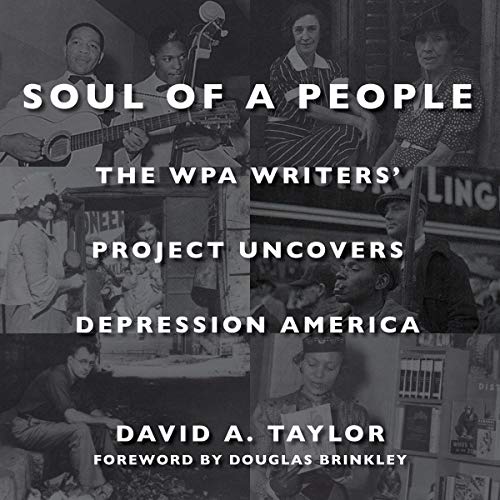 Soul of a People

By: David A. Taylor
Narrated by: Robin J. Sitten

Soul of a People is about a handful of people who joined the Federal Writer's Project in the 1930s and offers a glimpse of America at a turning point. This particular handful of characters went from poverty to great things later, and included John Cheever, Ralph Ellison, Zora Neale Hurston, Richard Wright, Margaret Walker, Jim Thomspon, Anzia Yezierska, Vardis Fisher, Kenneth Rexroth, Meridel Le Sueur, and Studs Terkel. In the 1930s, they were all caught up in an effort to describe America in a series of guidebooks and life histories. Through a narrative of striking images and firsthand accounts, the book reveals their experiences and the most vivid excerpts from their work on selected guides and interviews: Harlem schoolchildren, truckers, Chicago fishmongers, a Florida midwife, Nebraskan meatpackers, and blind musicians.

After the 1929 Crash, companies fired an average of 20,000 workers every day; in some cities over half the adult population was unemployed. The story of people rescued from joblessness by the Writers' Project is the compelling drama of people caught when an economy suddenly crashes as it is the fascinating account of some of America's best writers, unknowns turned loose on the landscape. Drawing on discoveries from personal collections, archives, recordings, and recent biographies, a new picture has emerged of how these individual dramas intersected with the larger picture of American life. This book illuminates what it felt like to live that experience, how going from joblessness to reporting on their own communities affected artists with varied visions, and the emotions that involved: shame, humiliation, anger, excitement, nostalgia, and adventure.

The WPA writers and artists anticipated, and perhaps paved the way for, political and cultural movements of later decades including the Civil Rights movement, the Women's Right movement, and the Native American rights movement.

Soul of a People is also a Smithsonian Channel film from Spark Media.

What listeners say about Soul of a People