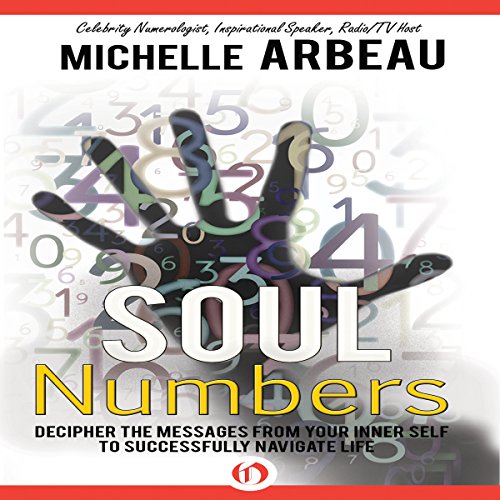 Decipher the Messages from Your Inner Self to Successfully Navigate Life
By: Michelle Arbeau
Narrated by: Catherine Force
Length: 6 hrs and 8 mins
Categories: Religion & Spirituality, Non-fiction
5 out of 5 stars 5.0 (1 rating)

Is it just a coincidence that a record number of people are seeing in numbers, or could it be the fabric of the universe revealing itself to us? According to the religion of Kabbalah and even the ancient Greek philosopher and mathematician Pythagoras, the truths of the universe are contained within numbers.

Skeptics argue that seeing repeating numbers is simply a matter of pattern recognition and it's all in our head. There have been scientific theories throughout history that attempt to explain the basis of the universal structure - from String Theory to the Holographic universe. All things in existence can be counted, sorted, or measured using numbers and, intriguingly, a common thread in many theories is mathematics.

More people are reporting the same phenomena in all cultures, races, and religions, turning skeptics into believers. Soul Numbers has the potential to create a tidal wave amid this numbers phenomenon, making it the new, most complete numbers-meaning bible.

Numerology books offer some insight into the base number meanings of 0 to 9 but fail to go further to precisely pinpoint and explain why someone is seeing 1:47 on a clock daily and what it means to them. Covering the number meanings from 0 to 999, Soul Numbers helps listeners decipher any number sequence. Whether they're seeing single 2s everywhere or exactly four - 2222 - it will allow them to break the numbers down like an ancient code. Unlike other titles with mainly angelic-focused number meanings, this book holds a broad spectrum view of number patterns, weaving science and spirituality to spark the curiosity of both the skeptic and the die-hard spiritualist.


Audio book review Soul Numbers: Decipher the Messages from Your Inner Self to Successfully Navigate Life
By Michele Arbeau, narrated by the author.
Have you wondered if there was hidden meaning in numbers and dates? If so you will enjoy Soul Numbers.
I got this audio on audible http://www.audible.co.uk/pd/Non-fiction/Soul-Numbers-Audiobook/B01IPXQG24
I was attached to the cover as it’s a striking design also I was curious as I have always been interested in number patterns and recently had started waking up and noticing the clock said, 2.22 or 3.33.
What could it all mean? Having no one to ask other than my old springer spaniel at that time in the early hours of the morning, I was pleased to find this book, and even more pleased when I found it was an audio book, as I am dyslexic and reading can be a chore.
Normally I like to put things off until tomorrow, but I thought I would listen to the first five minutes of Soul Numbers there and then and found Michele’s voice tuneful and easy to listen to, and her examples and simple to work out maths enjoyable that I listen to it in giant chunks only taking short breaks in-between.
Pen and paper in hand, I worked out my three children’s numbers and my own. My son was a hard working number 9. My middle daughter a spirituality seeking number 10. My youngest daughter and my-self were both 11’s, which is the best number to be! and that we shared this number with Michelle and Barack Obama. So therefor I was both instantly pleased, intrigued and wanted to learn more.
Michele, tells the story of numerology, from both a scientific and highly personal stance. I was very interested in the reasoning behind the 9.11 attack, justifying how it would have caused more casualties if it had been planned for a different day and learning about the sides to Hitler’s numbers.
All in all this is an absorbing subject that has been broken down into bit size chucks that suit a beginner in this audio. 5 stars as I highly recommend it.
Jane Yates