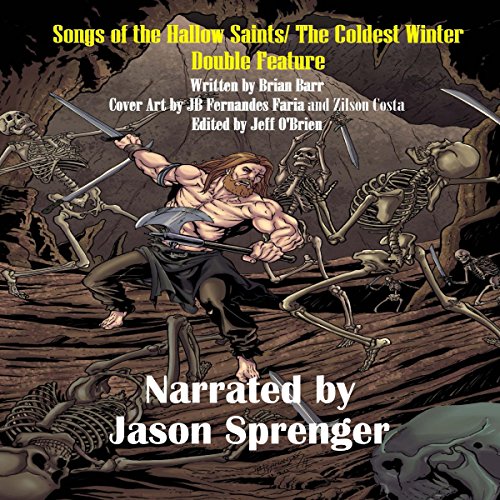 "Songs of the Hallow Saints" follows a Celtic swordsman searching for his love in the underworld.

"The Coldest Winter" follows a king haunted by the death of his beloved queen, who drowned in an ice-covered pond.

Well written, well read! Would definitely listen to more from the same author and narrator!
Just a shame it’s so short! :)
This is an honest review of a free review copy

Two great action filled horror fantasy stories. Both stories are completely different but are Celtic stories existing in the same Celtic mythical realm versus this realm. Between the two stories the first one was my absolute favorite. The whole plot and setting were fantastic. The second story was also unique and while it was a great story when I compare it to the first it just doesn’t compare. Again, I really liked the first story.
Brian Barr does great fantasy horror stories and these two are my favorite so far. Both worked well as short stories and I would love to hear more of them. Quite different from his other books I've listened to.
Jason Sprenger did a great job with the narration. Very fitting for the stories and I really liked his deep gritty tone. Everything about his narration was spot on.
I was voluntarily provided this free review copy audiobook by the author, narrator, or publisher.

These two stories are quite engrossing! I very much enjoyed listening to them. The first story, 'Songs of the Hallow Saints' is along the lines of a D&D adventure. It's also longer than the second story, so much so that you wonder if the second story will have time to be a proper short story. Never fear, 'The Coldest Winter' has plenty of time to be told and is done so excellently. Both stories are said to be horror but I disagree with that. I feel they are both more mystery and suspense than horror. I suppose you will just have to listen to them yourself and decide if I'm right or not. The narration was superbly done!! Jason Sprenger does an absolutely wonderful job!! The voices are quite distinct with proper emotion and the pace is very nice. I would akin his narration to that of Vincent Price!! Yes, he's that good! His deep voice carries the darkness of the stories through very nicely and I will look forward to any work he narrates!

I absolutely loved this book. This mideval horror sci-fi double feature was more than I could have hoped for. I don't know which I liked better, the story or the performance by Jason Springer. What really made this book stand out was Springer's use of sound effects throughout the book. I thoroughly enjoyed it.

I was provided with this review copy at no cost and have chosen to leave a review.

Sing me a song, the last one in my life

I have slowly become a big fan of Brian Barr. He does some creepy and amazing stories that never go the way you expect, and hit you over the back of the head, leaving you to wake up out in left field. Some of his best work includes the Three H's and Metal Magic, and are something you will want to check out after you read/listen to this book. He can set a mood like a busboy setting a table. He can also inject you with a serious case of the Heebie Jeebies.

Songs of the Hallow Saints/The Coldest Winter features two tales, both of which are set in fantasy realms. This is a departure for Barr, as he usually sticks to horror with dark tones and themes. I also see that he now has a short story out that has a sci-fi flavor to it, and it is good to see him branching out. I just hope that he remembers his roots and does pure horror on ocassion in the future. I never talk too much about the story, as I don't do spoilers, but I will say that both stories are outstanding, although I liked the first one more than the second. It might just be my Scot-Irish heritage making me biased, though, because the second story is very good as well.

To my knowledge this is the first time that Barr hasn't used Rick Gregory to narrate one of his stories. I have to admit, it was disconcerting, because I didn't even look at the narrator when I got this book, I just assumed it was going to be Gregory again, and when I heard Jason Sprenger I was quite taken aback. I had not expected someone new to be reading the story. I got over the shock, and quickly found Sprenger to have a really great voice for these stories. I don't want to abandon Gregory, but Sprenger really does a fantastic job setting the mood, and his voice is deep and dark. He adds menace just by deeping his voice, it is pretty impressive. I enjoyed listening to him. So, I am reluctantly forced to admit that not everything Barr does requires Gregory to be a success. I still miss him, though. Even though I did receive a promo code for this review it in no way influenced my considerations of the material, and in fact, inspired me to be more honest. In fact, getting a code generally makes me harsher as a reviewer as I am more often concerned what someone like Me will decide based on my review.

The Dark Fae laugh in the Shadows

Both stories were very good. The descent into "hell" while fighting the dead to then drop all expectations, see the future and the weird machine. Then the classic perspective reversal of the second story. Both were superbly done and narrated. Also liked the bgm and echoing voices, gave it more atmosphere. I was given this free review copy audiobook at my request and have voluntarily left this review.

The style reminded me of the kinds of atmosphere and characters you'd find in the Conan stories, or the manga Berserk, or even the Dark Souls game series. Specifically it's that resigned determination in the face of hoplessness kind of feeling. I liked the first story the best. It took some unexpected turns. The second story didnt really have a hoplessly determined hero, but retained that bleak, magical feeling. Ultimately though I found the stories needed more fleshing out. There were too many unknowns about the world/setting which made many scenes and twists feel sort of "deus ex."

Overall if you're into bleak sword and sorcery tales, you'll probably enjoy this.

Dark, beautiful, and tragic. All are things I look for in a dark fantasy, and Brian Barr delivers.

A short audiobook listen that I still found to be incredibly atmospheric, dark, and foreboding. Brian Barr did an incredible job with this set of stories and you can tell he's going to be a rising star in fantasy. They were a good tease that made me interested in the worlds as well as the environment. Because of the short length, I recommend buying them rather than using audiobook credits. Still very much worth it.

If you like horror books you won't be disappointed. The two stories melded together for an enjoyable read/listen. The narration was good as well.