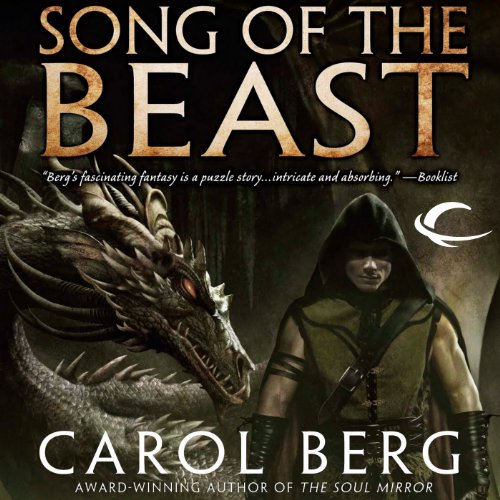 Song of the Beast

The winner of the Colorado Book Award is "a fantasy I didn't want to put down" (SF Revu). Brutal imprisonment has broken Aidan McAllister. His music is destroyed, and with it the visions he once gave a kingdom ravaged by dragon war. Now, he risks his hard-bought freedom to uncover the truth behind his incarceration - and to meet his enemy face-to-face....

What listeners say about Song of the Beast

Half Good, Half Not

This could have been a great experience if this book had been read solely by Jeremy Arthur. Unfortunately half of it was read by Claire Christie, who ruined her portion of this wonderful book, with stumbling, stuttering dialogue and long pauses. Having read the printed book years ago, I knew that I liked the story, and when I began to listen to the Audio version, I was well pleased, as Jeremy Arthur reads the first portion, which is Aidan McAllister's part of the tale. Then we came to Laura's portion of the story, and it all fell apart, as the reading was taken over by Claire Christie. I would definitely listen to other books read by Jeremy Arthur, but just as definitely I will avoid anything done by Claire Christie.

Finally a fantastic Dragon with fantastic Narrators for Adults It's been months since I've been able to find one and I always listen to a couple books a month. It's about the slavery of dragons and their last hope of freedom. I wasn't sure about buying this book, because the Publisher's Summary was so short it doesn't really give enough of an idea of what the book is really about. However, I finally bought the book, because Brandon Sanderson says that Carol Berg was one of the writers that influenced his writing, and I'm trying to read the books that influenced him until his next Stormlight is available. The narration was fantastic too and I think the narration was spot on in this complicated audiobook that has several internal dialogues going on St once at times. I wish there were more books to follow. I'll definately liston to this book again and I'm going to purchase more of Carol Berg's books. I highly recommend this book for any fan of Fantasy.

What made the experience of listening to Song of the Beast the most enjoyable?

The narrator, he managed to make each voice different and clear.

It went in different but good directions instead of treading the stereotypical path of most heroic journey stories.

Have you listened to any of Claire Christie and Jeremy Arthur ’s other performances before? How does this one compare?

Great characters, addicting story and a good performance. I hope the author will continue with book 2! :)

After years of waiting, the book finally came available as an Audiobook. Since I already have the book on Kindle (and as a hard copy), Audible.com let me buy the audiobook for just $4.59, a bargain I was delighted to snatch. A steal!

After being terribly disappointed in the recording of Kevin Hearne's Hunted (disappointed enough to ask for my money back), I was delighted this book was every bit as good as I hoped it would be. Maybe better. Narrated by Claire Christie and Jeremy Arthur, I was (again) surprised at how much more I get from an audiobook than from print. I think it's because I read very fast. When I listen, the pace is that of human speech, perhaps slightly slower than normal conversation. I absorb more of the story listening than reading.

The dual narration works well. Aiden and Lara having their own voices and perspectives is appropriate. Usually I don't like multiple narrators, but I like them in this book.

Song of the Beast is Carol Berg's is a standalone book. I wish it were a series. I have it on good authority that another story (short story -- not an entire book) will be coming out based in the same world, though not featuring the same characters. I would prefer a book or two, but I will happily settle for whatever I can get.

If Carol Berg writes it, I will read it. I think she's brilliant and not nearly as appreciated as she deserves.

I came to love her dragons. There is a faint whiff of Pern to these dragons, except no dragonrider of Pern would so mistreat a dragon. I'm a sucker for dragons. Any dragon. And these are fabulous dragons.

The main character -- Aidan McAllister has been imprisoned and tortured. His beautiful voice has been silenced, his hands brutally destroyed. His music, which offered solace and hope to war-torn Elyria, is gone. The god in whom he never lost faith and nurtured him and his music since he was a child seems to have abandoned him.

Yet no one has yet told him what his crime was. He has no idea what earned him such punishment. He has emerged from prison a broken man, battered beyond endurance, wanting nothing more than peace and safety ... and the end of pain. Having lost himself, he must find his way back to himself, remember who he was because that's the key to what happened to him, what is happening to the world and the dragons. There is, of course, a beautiful woman.

Through it all, Aiden remains a gentle soul in a cruel world, a man to whom violence is abhorrent no matter what was done to him. He's neither vengeful nor mean. Music is his magic.

I wish there were a sequel to this book. I wanted to know what happened next, how this society evolves. The book left me with lots of questions. It isn't a cliff hanger -- not exactly -- but it didn't seem quite finished to me. There's plenty of room for more stories as this world realigns and reconstructs itself in the wake of a new understanding of dragons.

I liked the book so much I was sorry it ended. I never want any of Carol Berg's books to end.

The narrators were almost monotone. Love the story, wasn't impressed with the performance-- it was disappointing.

Honestly, I think this book made me realize I don't care for the fantasy genre. I didn't feel connected to any of the characters in this book. The story wasn't really gripping in any way to me, and I think it has more to do with me and the genre than the book itself. That is why I still give it 3 stars because I think objectively the author does accomplish what she sets out to, and i think for those who are a fan of the genre they would like it.

It just wasn't for me despite some killer vocal performances. However, the most annoying thing with the vocal performances to me was that the two readers pronounced the same words differently. I understand it could be a character choice, but they carried it past their first person characters. For example the male reader would say "Elehim" and the female would say "Elheem." Which would be fine if that is how their characters pronounced it, but they would both make the same character Narhum say it the way the reader did. Maybe this is nit-picky and it probably is, but it is the only reason the vocals didn't get 5 stars, because they were dynamite.

Overall, the story was a swing and a miss for me. Not really landing as a romance, not landing as an epic, and very weak as a mystery. Maybe if I was overall into fantasy more I would have liked it better, because maybe taking all of these weaker elements combined with a joy of a fantasy world it would have come together, but it just didn't. The world however, was extremely well built. Pure masterclass in building class, myth, and society. It was extremely well built, but at the end of the day I just didn't care about what was happening in the cool world. Bottom line I wanted to like this book far more than I actually did.

A fun read. Not the best writing, but good characters and a fun story. The story is a bit weak at points, but not enough to ruin the book. Overall, a good read.

This has been one of my favorite Carol Berg books since it was first published in 2003.

A story of a broken man just trying to go forward.

Plot
This is not some tale about an epic hero on a quest to save the world; this is the story of a a man who has been broken. It is a bard's quest, not to save the world, but to right a wrong. The pacing is outstanding, action moves forward quickly, but it moments that need a little special attention get it. When the story seems as if it's about to sputter and stall, Carol Berg switches things up and everything is refreshed and renews your interest in the story.

Characters
Aiden McAllister is a broken man. My first thought upon meeting him is he's a bard from a tabletop game going on on a quest, he just dumped his DEX and STR to reach godly levels of performance and given a backstory that makes things interesting. The other characters are a wonderful collection of supporting cast, villains, and allies. Aiden McAllister is a broken man whose music has died, and you feel his apathy, and struggle to move forward despite the fact that a dead man isn't supposed to move. Carol Berg didn't create characters in this story, she created people.

Narration
Jeremy Arthur's narration is nothing short of spectacular. My biggest, and in fact only, complaint is that I had a hard time picturing him as a musician singing for the gods. His inflection and tone are however, both perfectly on point. Jeremy Arthur becomes the broken hero.

Claire Christie was a perfect accompaniment and counterpoint to Jeremy Arthur. The transition to her narration was a sudden and refreshing change. She did a wonderful job pushing emotion and turmoil into her own narrating. Even though she had significantly less to narrate, her portion was no less important for it.

Wonderful beginning, amazing characters with flaws that make them human and relatable. Great detailed descriptions, made me feel like I was there with the characters.

Didn't understand the different races at all, more descriptions would've helped (Dwarves, Elves, Gnomes, etc. are easy to imagine because those are "trope" fantasy races and you can get away without having to describe them). But Carol Berg just did NOT give enough details about the different races aside from the Ridemark clans for me to get a visual difference with the various races.

Very much disliked the ending. But, can't win em all I guess.