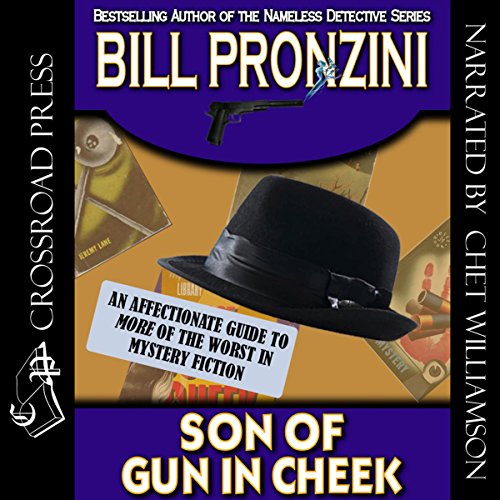 Son of Gun in Cheek

"The prolific Pronzini not only writes a lot of mysteries (The Nameless Detective series), he obviously reads a lot of them too - but not all of what he reads is good. His 1982 Gun in Cheek was a wickedly humorous collection of unbelievable plots, poor characterization, unlikely language and just plain dumbness in his favorite genre; here he presents another collection, subtitled "an affectionate guide to more of the 'worst' in mystery fiction." Some writers (Harry Stephen Keeler, Michael Avallone) are roasted at length, and some are sideswiped, including even fine writers experiencing temporary lapses (Ed McBain, Joseph Wambaugh). Not perhaps for the general reader, this volume should appeal to addicts who, like Pronzini, will apparently read anything labeled "mystery". Sex, pulp mags, B-movies and "The Alternative Hall of Fame" are featured in wittily titled chapters with a postmortem bibliography." (Publishers Weekly)

What listeners say about Son of Gun in Cheek