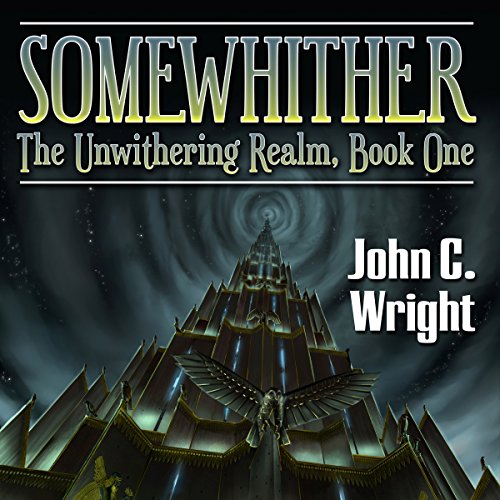 The 2016 Dragon Award-winner for Best Science Fiction Novel, Somewhither is the first part of A Tale of the Unwithering Realm, a new science-fantasy series from science-fiction master John C. Wright. It is an adventure, it is a romance, and it is a coming-of-age story of a young man who is not a man, in a world that is only one among many. It is a tale of a greater and darker evil with longer reach than anything he could imagine, of despair without bounds, of pain beyond measure, and of the faith required to surmount all three. It is a story of inexorable destiny written in the stars and the stubborn courage that is required to defy it.

Ilya Muromets is a big, ugly, motherless boy who does not look like anyone else in his Oregon town. His father is often absent on mysterious Church missionary work that involves silver bullets, sacred lances, and black helicopters. Ilya works as a janitor for Professor Achitophel Dreadful of the Cryptozoological Museum of Scientific Curiosities, and he has a hopeless crush on the Professor's daughter, Penelope, who pays him little attention and appears to be under the impression that his name is Marmoset.

One night, when Professor Dreadful escapes from the asylum to which he has been temporarily committed, he sends a warning to Ilya that not only is his Many Worlds theory correct, but those many worlds are dominated by an unthinkably powerful enemy determined to destroy anyone who opens the Moebius Ring between the worlds. And, as it happens, prior to his involuntary absence, the Professor left his transdimensional equipment in the basement of the Museum plugged-in and running....

So it is that Ilya, as he has secretly dreamed, is called upon to save the mad scientist's beautiful daughter. With his squirrel gun, his grandfather's sword, and his father's crucifix, Ilya races to save the girl, and, incidentally, the world.

This was a fun and engaging story. The authors vision is imaginative and fun, and the narrator does a great job with characters voices.

The story doesn't take itself too seriously and has a light-hearted feel to it without going overboard and the reader losing investment in the characters. It is quite a gruesome tale, and our heroes really are fighting their way through some times disgusting foes - not for the faint hearted!

If I were to make a criticism, I don't know if it needs the level of description detail it has... but, I'm not a writer, so maybe it's good. I just found it hard to follow and envision what was being described some times... might just be me though!

Definitely give it a go, good read for guys that like plain-spoken heroes with guts ;) guts everywhere...

Also, proof that Determinism is hell.

Not perfect, but extremely amusing

Somewhither was extremely amusing and a little tiresome. Amusing because the world John C Wright creates is so absurdly ridiculous, and because his jokes and quips are quite funny. A little tiresome because the story is narrated from the perspective of an adolescent dorky guy who obsesses over things adolescent guys frequently obsess over, like girls' curves. Granted, those obsessions might be realistic to include, and maybe the author intended for me to roll my eyes at times. In any case, the tiresome bits ended quickly and the story moved on and became enjoyable again.

It was still very fun (it is nearly nonstop action), and maybe even a little bit edifying. Not very edifying, but arguably a little.

BTW, this book is nothing like Narnia or anything I'd characterize as a "Christian book". It is far too weird and ridiculous to be lumped into a category with them. Yes, Christianity is mentioned in some spots, but so are Norse gods, Egyptian gods, vampires, astrology, and Avatar the Last Airbender. It contains about 1/50th the philosophizing as a typical Orson Scott Card novel. If you avoid Christian literature in general, you might still love this book if you give it a chance.

this book is lots of fun. a great balance between outrageous and grim that slides between both extremes. its greatest downfall: we're still waiting on a sequel, and the author doesnt have much on audible. im stuck listening to this pne over and over again. it only gets better each time, but I WANT MORE O.O

Can't believe I have to wait for next book.

The richest multiverse I've ever read with compelling action story. I wish there were more books in this series.

This book is very good

this book is great but it took more attention than I am used to sometimes I fell out of the story and I had to jump backwards a bit.
If you are like me and sometimes get distracted than don't listen to this book while doing something demanding.
I look forward to listening to the nex book in the series.

An 8 hour story stretched to 22 hours

The story here reminds me of school cafeteria hamburgers where the patty is more oatmeal than beef. Have you ever driven Hwy 99 from Modesto to Wheeler Ridge? I remember the way I felt on that drive, that's the feeling I have listening to this story. Just about the moment I drift off, something funny or interesting will happen, but by that time, I'm nearly catatonic.

Were Terry Pratchett, Neil Gaiman, and C.S. Lewis to be thrown into a magical blender capturing the best of each, this might be what resulted. Well done, Mr. Wright.

6 of 18 people found this review helpful

Has Somewhither turned you off from other books in this genre?

This book started off somewhat interesting, with the main character being whisked away in a Mobius strip and the goal of rescuing the damsel in distress. However, the book has about 18 continuous hours of fight scenes, during which the main character cannot die because for whatever reason, he is immortal. I found myself thinking...well, that fight scene was dispensable for this story. Wait, so was that one. Actually, most of them are. I think instead of a 3-volume series (which will presumably last 60-70 hours), a single 6-hour book with just the interesting parts would be better.