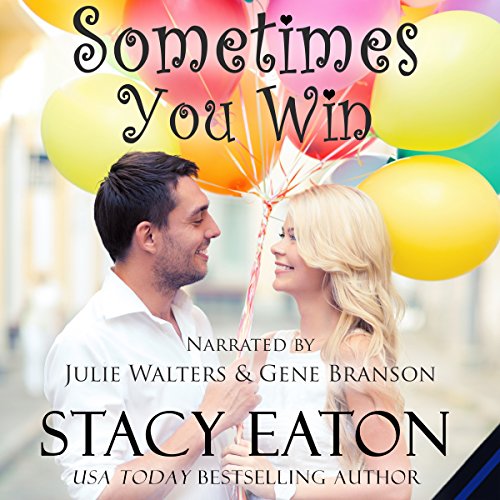 Haley Rosewood's life has never been easy, especially not with a class-A jerk for a boss and a marketing job that barely pays her enough to provide a roof over her daughter's head and food for the table. Every day is a struggle, and the thought of being romantically involved with anyone is a dream she doesn't dare indulge.

Devon Carrington is the type of man to give the shirt off his back to anyone in need, and when he finds Haley struggling through a bad day, he does everything he can. In return, he asks that she help him pick out lottery numbers and tells her that if he wins, she gets half.

When the winning numbers are drawn and Devon and Haley learn that they have won, can the two of them put their one-night stand behind them and build something for the future? Find out in Sometimes You Win.

What listeners say about Sometimes You Win

I always read/listen to detective books so this is my first time with a easy love story, also being new to audiobooks (only 6 listened too) it was a very good experience to hear such good narrators. I throughly enjoy this story and I am definitely reading more from Stacy Eaton. To me this story is very believable, life throws some strange challenges to us all and Haley definitely needed some good luck. The little things like, oh no, my car keys, is what I think I would do, time to get on too book two.

I found this book to be very good and it pulled me in. I thought the basis of this book was very good and realistic. I can understand the want to be independent and not accept help from others. This story features Hailey, a single mom, and Devon, a security businessman, Allison, Hailey's daughter, and Mrs. German, the grandma-like neighbor of Hailey and Allison. Devon was attracted to Hailey for months before he bumps into her. I liked how subtle and persistent he was in pursing Hailey. They had a major miscommunication which resulted in them not being together for a while. Hailey's antics to avoid him were very realistic. A life changing event then happened which brought them back together. Things seemed like everything was great and the story ended. Not a cliffhanger ending, but open to continuation. Without giving away spoilers, I must say the author wrote a great story and featured some thought provoking things. Kudos to Stacy Easton for another great book.
This was the first time that I had heard Julie Walters and Gene Branson perform. They were good, but didn't have as many distinguishable voices for the various characters as I was hoping to hear. The delivery and performance was flawless, but not exceptional. I think I'm sometimes too picky with expectations of performance. I requested this review copy audiobook and have voluntarily written this review. I will definitely listen to the next book in this series.

What a fantastic series to listen to. It’s a must have. Narrators did a fantastic job also on this audiobook.

Sometimes You Win is book 1 in the Sometimes Series. It is the sweet love story of Haley and Devon. He is her knight in shining armor, and I love his character. Haley is likable but rather skittish and has trust issues. This is a nice beginning to their story, and I'm looking forward to listening to book 2. I received this audiobook at my request and have voluntarily left this unbiased review.

A sweet contemporary romance. I love the unexpected way that Haley and Devon come together, and seeing how their relationship blossoms. A great couple. I really enjoyed this story written by Stacy Eaton and narrated by Julie Walters and Gene Branson. I was given this free review copy audiobook at my request and I have voluntarily left this review.

Sometimes You Win The Sometimes Series, Book 1 By: Stacy Eaton This is book one in a romance trilogy. Haley Rosewood is a hardworking single mom, that keeps working for an awful boss. Devon Carrington runs a security business that's in the same building where Haley works. They've seen each other around, but didn't meet until Haley had one of the worst days of her life. He came riding to her rescue and the story begins. Miscommunications and hurt feelings take them on a roller coaster ride. There are twists and turns and lots of simmering romance on the side. A surprise bonus brings things and people together. Now on to book two!!! The narration was well done. The characters were well portrayed. Julie Walters and Gene Branson were a good team for this book. I was given this free review copy audiobook at my request and have voluntarily left this review.

I loved this story! It was very easy to connect with the characters. It was a lot of fun watching the characters deal with their trials and tirbulations. I cant wait to listen to the next one! I definitely reccomend it!

Haley's luck is about to change

This is a sweet book about a woman and her child and her meeting the man of her dreams when everything seemed to be going wrong. Haley's luck is definitely about to change and so is Devon's. This is book 1 of 3 and I enjoyed listening. Julie Walters and Gene Branson did a good job narrating this story. I recommend this book.

I received a free code to listen to this book and I did so willingly. This is a truly wonderful book of this series. I can't wait to listen to the next book.

I really enjoyed Sometimes You Win. The story is believable and made me laugh out loud several times. There were many things about Hayley's life that I could relate with (money-wise). This is one of those books that I wish was offered in print but, as of this review, is not. The audio performance was really good and I ended up enjoying both narrators. I received this audiobook from the author/publisher/narrator in exchange for an honest review via Audiobook Boom.

A good story and a easy listen

This book is a little over 4 hours long. The story is good and flows well. Each chapter is read / written by the opposite main character. The switch back and worth made the four hours go by fast. I am going to listen to book two. The narration was good. Both narrators did a good job. It was an easy listen. I will listen to both these narrators again. I was given a copy of this book at my request and voluntarily left this review!