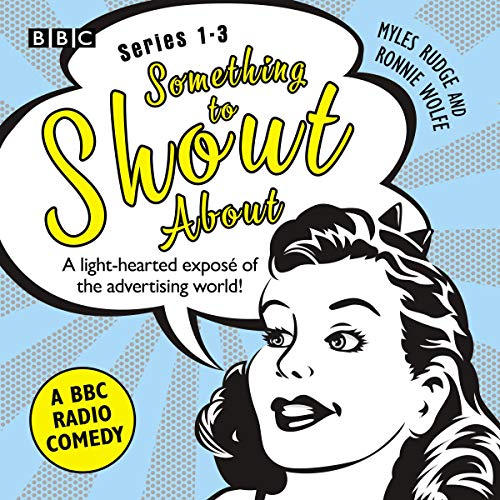 Something to Shout About: Series 1-3: A BBC Radio Comedy

Set in a London ad agency called 'Apsley, Addis, Cohen, Barbican, Blythe, Giddy & Partners’, Something To Shout About ran over three series in 1960-61.

Michael Medwin stars as account executive Michael, with Fenella Fielding as his seductive secretary Janet, Joan Sims and Sheila Hancock as shorthand typists Mavis and Shirley, Eleanor Summerfield as no-frills executive Maggie and Nicholas Phipps as copywriter Adrian. This disparate team must stick together to succeed, as they battle to win new accounts and impress clients – and from wooing a US tycoon to putting a glamorous spin on a dreary seaside holiday camp, they always think big. Why else would they hire an elephant to promote bath salts?

In these three series, a new recruit unsettles the ad agency’s routine, there’s uproar in the agency when the women discover that the men get paid more, a Parisian photoshoot is ruined and has to be redone on a budget and a team trip to the countryside to work on a shampoo commercial doesn’t go to plan....

Written by Myles Rudge and guest-starring Warren Mitchell and Roy Dotrice in a variety of roles, this light-hearted look at the advertising world is a treat for lovers of classic radio comedy.

Music by The Jingle Belles and The Bernie Fenton Quartet, under the direction of Cliff Adams (Series 1).

Please note: This is a vintage recording. The audio quality may not be up to modern day standards.

What listeners say about Something to Shout About: Series 1-3: A BBC Radio Comedy

Follow the dings of the typewriters and the click clack of heels to the offices of hapless admen. There’s a battle of the sexes over pay, a hopeless typist, backbiting between the sexy young secretary and the dept head/battle axe and goes to prove nothing really changes. Wonderful series, hidden gem.