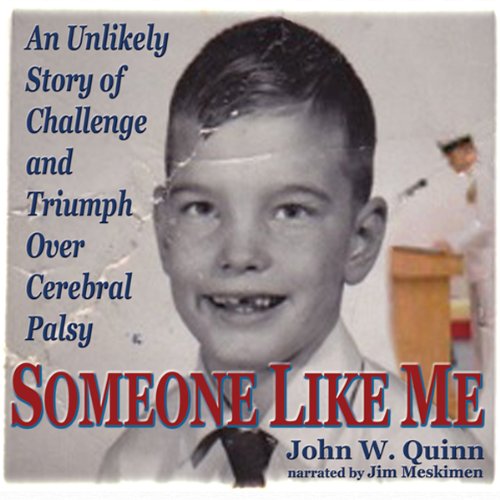 An Unlikely Story of Challenge and Triumph Over Cerebral Palsy
By: John Quinn
Narrated by: Jim Meskimen
Length: 5 hrs and 49 mins
Categories: Biographies & Memoirs, Memoirs
5 out of 5 stars 5.0 (1 rating)

As a child, John Quinn had a dream of a naval career despite his affliction with cerebral palsy. After failing the physical exam, he underwent painful, self applied physical therapy for one year then successfully passed a second exam. He kept his cerebral palsy a secret from the record-keepers and medical authorities for 20 years. He had a distinguished and highly decorated career despite the pain he endured to appear normal. He served on board destroyers, a battleship, two aircraft carriers and functioned as an administrator for a Seal unit.

The outside world also impacted on him further aggravating his CP when he was challenged by alcoholism and excessive grief caused by the suicide of a brother. With help, John Quinn triumphed over both, as he did the painful cerebral palsy.

I have cp and this book inspired me complete my degree. So glad I listen to it.

The author delivers hard truth about his experience with cerebral palsy and alcoholism. I find that this story challenges how I consider myself and others. I absolutely enjoyed every moment of the book. The narration was also excellent.

This could have been me

I have CP My plan was to go through basic training between my junior and senior year of high school and retire from the navy Didn't happen for me because I admitted to the navy I had cerebral palsy. I'm a civilian government employee now best decision I ever made Wish I would have started it just after I figured out I couldn't get the navy. John W Quinn did exactly what I wanted to do Thank you for your service and for this book

My twin sons have mild CP and they are just as strong willed as John in this true story. They now have careers as Recreational Therapists at VA hospitals. One in Dallas and the other in San Antonio. So proud of my guys. Thanks John for writing this book.

Very good - inspire you to triumph over adversity.

What made the experience of listening to Someone Like Me the most enjoyable?

It was a true story that I could think of 5 people who should hear it.

Jim Meskimen was great. It's always a good sign when you realize that you've listen to the entire book in one-two sittings- in part to how it was narrated. You can listen the story come alive.

Just like John, I also have a mild form of CP. It was truly a great listen on Audible. Throughout the story I was able to relate to many of John's stories. Everyone has disabilities- it's just a state of mind that determines whether the disability will hinder one's goals or if one will acknowledge it and use it to accelerate his or her goals In this book, John recalls his dreams, some of his challenges and how he achieved many of his goals that he sought out. This is a great book for anyone seeking to learn more about CP, John's story and most importantly realizing that one can achieve anything with hard work, perseverance and dedication- regardless one's disability.

I had the pleasure of meeting John a month or so ago, and shared a meal with himself, as well as other friends from www.handicapthis.com. What a mindset changing day. Love you all, and Keep on Keeping on.