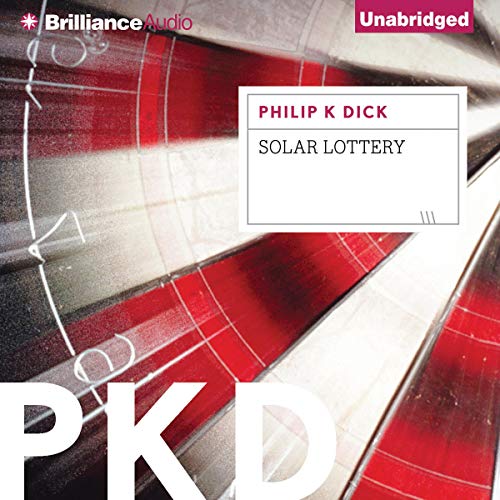 In 2203 anyone can become the ruler of the solar system. There are no elections, no interviews, no prerequisites whatsoever - it all comes down to the random turns of a giant wheel. But when a new Quizmaster takes over, the old one still keeps some rights, namely the right to hire an unending stream of assassins to attempt to kill the new leader.

In the wake of the most recent change in leadership, employees of the former ruler scurry to find an assassin who can get past telepathic guards. But when one employee switches sides, troubling facts about the lottery system come to light, and it just might not be possible for anyone to win.

What listeners say about Solar Lottery

The underlying themes of ambition, paranoia and self destruction are clearly evident here... but little else. One of Dick's first works so we'll let him off but really not a great representation of what he went on to become.

For all Philip K dick fans this is where you start he knows how to write a good story and pull you through a complex world of science fiction with very engaging characters. Superbly read by David de Vries who brought the characters to life. 5 STARS A Robertson

"I'm a sick man. And the more I see, the sicker I get. I'm so sick I think everybody else is sick and I'm the only healthy person. That's pretty bad off, isn't it?”
― Philip K. Dick, Solar Lottery

It is hard to believe this was Dick's first novel. It seems so grown up; not quite ripe, but close enough to still be edible and enjoyable. It combines Dick's early space novels with his later, funky techno-politico-religious cynicism.

01 function minimax(node, depth, maximizingPlayer)
02 if depth = 0 or node is a terminal node
03 return the heuristic value of node

Probably my favorite bit of this whole novel was Dick's bending of the idea of Minimax, a form of Nash Equilibrium and game theory. The election of a leader by random is offset by the almost simultaneous election of an assassin. In Dick's Zero-sum future, the random probability of a stupid leader is offset and minimized by the election of an average (or better than average) assassin. Thus, dumb leaders die quickly, good leaders last longer.

The climax of this novel involves both the epitome of game theory and the inevitable corruption. This might have been just a three-star novel, but for someone who loves economics, game theory, and good SF, this one needed/demanded a one-star upgrade.

a little too disjointed for me

some PKD seems a little slap dash and for me this is one. there are several good ideas but i didn't feel they were coherently worked out and i was left feeling like there were 2 or 3 short stories jammed together and not completed satisfactorily. And the overall structure of the future society needed fleshing out for me, bits and pieces floated about, and in the end i had no clear vision of it, which tends to negate the plot line as such. there are several nice moments, but still can't recommend it when you can get Policeman, Androids, Valis and Scanner as well as High Castle instead. Still I will continue on with PKD.

I love PKD but this is not one of his best books. The story is weak and the ending weaker still. Look elsewhere.