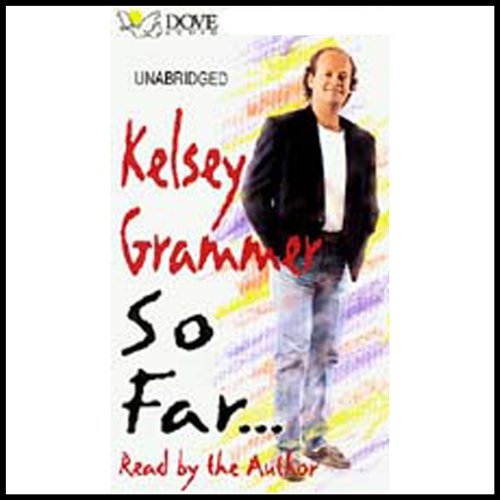 Kelsey Grammer's career has been blessed with great comedy, but to know his personal life is to truly know tragedy. In this frank, compelling, and moving autobiography, the Emmy Award-winning star of Frasier and Cheers poignantly recounts the overwhelming tragedies that haunted his early life - the murders of his father and sister, and accidental deaths of his 2 half-brothers. Despite his remarkable television success, Grammer's struggle to cope with these traumas led him to drug and alcohol addictions that soon became public. So Far... describes his nightmarish journey and inspiring triumphs, with behind-the-scenes stories from the sets of his 2 hit shows. Human, fallible, funny, and wise, Grammer has developed a profound philosophical approach to both the comic and the tragic aspects of life.

What listeners say about So Far...

From Frasier to Boss to sideshow bob, there's no one more distinguishable than Kelsey Grammer. Hearing the inaccuracies exposed that were reported in the press and stated on the internet, along with the hard truthes of his tragic life, read by the man himself is as warm and comforting as a hot bath in the dead of winter. Yet the experience is intensified by the high quality prose of 'so far'.

Would recomend it highly to anyone, and would willingly forgo any luxury of value to purchase this audiobook.

loved it. wanted to read it for a long time,

love it, love him, love his voice, effortless talent. hope to read the next chapters of life for kelsey soon.

While I did enjoy this I would have liked a little more depth about situations. Well read.

An amazing man with a amazing voice, just perfect for an audio book version.

Although some may question his morals in certain areas of his life, with most being based on false opinion, this man has lived a life that few could imagine in the good ways and bad.

You just can not get away from his most beautiful charm. One of life’s truly enigmatic characters, well worth a listen.

I loved the insight into Kelsey's life. A few people have criticised not mentioning the Simpsons but the book is more about his personal struggles. He often mentions people who assisted him and the luck of a lot of his success. Worth a read or listen!

Don't listen to this if you want a laugh

Well he certainly is an unusual character but after a while I felt it was all a bit too serious. obviously, having one's father and sister murdered isn't funny but there doesn't seem to have been much joy in his life at all..All his marriages seemed to fail due to the women he married .He has problems with drink drugs and women and it is difficult to know how much of his autobio is true as he doesn't take much responsibility for his own actions.I felt sorry for him and don't think I would like to meet him in real life. he's clever and talented but very troubled and there are no laughs in this book AT ALL. Considering his comedic performances I felt that was a great pity.But then he didn't write the scripts, he only wrote this rather sad book

Come, fall in love with Kelsey Grammer all over again. Such marvelous detail about intricacies of his life. I feel, as if, i almost know him.

I have no words

This book is profoundly personal, ecstatically self-aware, and poetically and prophetically soulful. It tells a tragic story, with hope and strength - always resoundingly resolved to live life - to live well and fully. I bought it with the intention of adding it to my Rolodex of audiobooks I listen to but I have not stopped listening to it. I can’t. My only regret is that I am almost done with it. I fear I shall never in my life hear something as beautiful and touching ever again.

kelsey Grammer opens up about his career, marriages, and family. this clever and well written autobiography is both heartfelt and heartbreaking. kelsey pours out his heart and soul in this deeply personal tome. I highly recommend this book.

Very good. Kelsey you are loved by God! Hope that you are finding peace now in the year 2019!

I really enjoyed hearing Kelsey Grammer’s personal story. It’s raw, real and full of humor and heart. I’m glad he chose to read it himself for audio as he has a gorgeous deep voice. He seems to be a kind, thoughtful and fascinating character to study.

I’m a huge fan of Frasier and Kelsey Grammer. It was such an interesting look into his life and I wish he would write another! I also wish he would narrate more books, his voice is so soothing.

Bravo, Mr. Grammer. What a life you have lived. Ubber highs to the lowest lows. Outstanding narration.

Great presentation. I laughed and cried along with you. In a few places your voice volume dropped too far to catch your words without having to rewind, creating an interrupted listening experience in one or two places. I learned a good deal from your story. So far, so good!

Great story of a fascinating man.

My daughter and I while quarantining decided to watch old episodes of Cheers. It was a wonderful bonding experience laughing with my nineteen year old. We both loved the Fraser character the most. I discovered this book and thoroughly enjoyed it.
The ups and downs and twists and turns of his life and some similarities to my own made for a great journey. I was disappointed when it ended.
I highly recommend.

Wish the book covered more of his career. It was inspirational for the number of tragedies in his life.