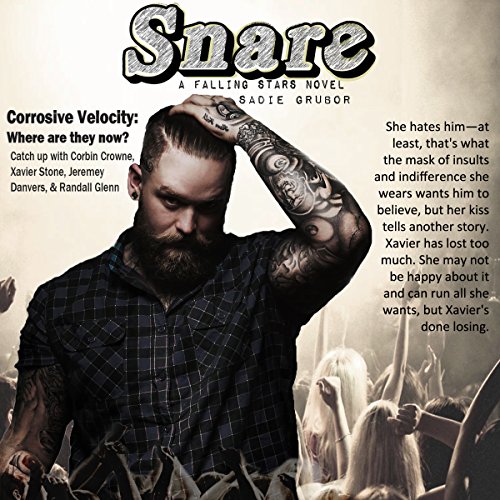 Sidra Campbell lives by a hump-him-and-dump-him rule. No love, no messy emotional strings, means no chance of losing control - again. She came to L.A. to support her cousin Liza, but she's also running from the vicious cycle she left behind in Pennsylvania.

Unfortunately for her, two men aren't making life easy. One invokes the haunting nightmare of a past she's fought hard to be a survivor of, not a victim, and another is so tempting, so persuasive, she reinforces the wall around her heart and dons her mask to keep the behemoth out. To everyone else, she appears confident and happy, but inside, she's hiding the deepest pain.

Xavier Stone, the former drummer to one of the greatest rock bands, Corrosive Velocity, has suffered loss after loss. Finding himself a full-time dad and in threat of losing once again, he's barely hanging on.

There's one woman who creates a spark of interest so strong, he can't seem to keep his hands to himself. She hates him - at least, that's what the mask of insults and indifference she wears wants him to believe, but her kiss tells another story. Xavier has lost too much. She may not be happy about it and can run all she wants, but Xavier's done losing.

When two explosive personalities collide, one runs and the other snares.

What listeners say about Snare

read in order, highly recommend!!! All Sadies book's are fantastic! narration is excellent! Sid is one of my favourite characters!