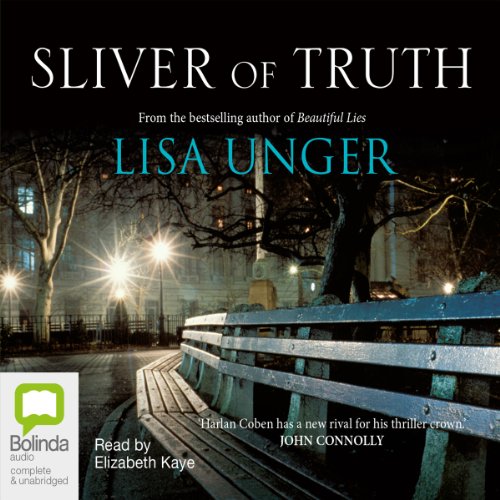 By: Lisa Unger
Narrated by: Elizabeth Kaye
Try for £0.00

Recently, Ridley Jones stepped off a street corner and into an abyss of violence, deception, and fear. She is being a lot more careful about where she steps and trying to get on with her life when another seemingly mundane act - picking up a few envelopes of prints at a photo lab - puts Ridley at the nexus of a global network of crime. A shadowy figure of a man appears in almost every picture she's taken in the last year, lurking just far enough away to make identification impossible. Everyone from the federal government to the criminal underworld wants to know who the man is - and where he is - and some people are willing to kill to find out.

Now the FBI is at her door, some serious bad guys are following her every move, and the family she once loved and relied on is more distant than ever. Ridley has never felt so confused or alone in her life. Everyone she loves has turned out to be a stranger - she even feels like a stranger to herself. Is she a product of nature or nurture?

At once hunting down a ghost and running for her life, Ridley doesn't know if she ever had the power to shape her own destiny or if love exists anywhere beyond her imagination. The only thing Ridley knows for sure is that she has to get to the truth about herself and her past if she's ever going to find her way home.

Charged with relentless intensity and kinetic action, playing out with unnerving suspense on the streets of New York and London, and seen through the terrified but determined eyes of a young woman whose body and heart are pushed to the point of shattering, Sliver of Truth is another triumph from the New York Times bestselling author of Beautiful Lies.

What listeners say about Sliver of Truth

Listen to the first book before this!

This is a follow up to the book Beautiful Lies by the same author, so the first thing to say is "Listen to that first!". If you don't, you'll find the story confusing.

Now, if you *have* listened to the other book, you'll know roughly what to expect. The story itself is pretty good, but I did think that it was in danger of "jumping the shark" at a couple of points. I know some are frustrated in that it doesn't wrap everything up with no loose ends at the end (as in the previous book). To be fair, life is like that, so I don't think it's a bad thing myself. However, it was a bit weaker as a story, and a few plot leaps were stretches. There's also a section, about two thirds of the way through where they chapters jump back and forth in time. If you're not careful, you could lose track of things there, so not one to listen to as you're dozing off to sleep at night.

Elizabeth Kaye does a good job, keeping the pace going with enough emotion in each of the characters voices to keep you interested.

All in all, it's a nice little time filler of a novel, with some reasonable twists and turns.