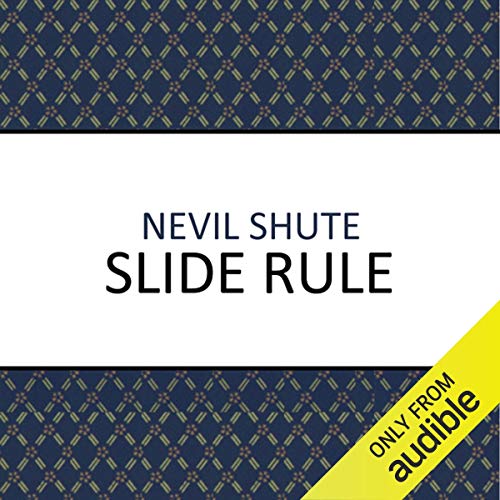 Autobiography of an Engineer
By: Nevil Shute
Narrated by: James Faulkner
Length: 9 hrs and 7 mins
Categories: Biographies & Memoirs, Memoirs
4.5 out of 5 stars 4.3 (30 ratings)

Nevil Shute was a power and a pioneer in the world of flying long before he began to write the stories that made him a best-selling novelist. This autobiography charts Shute's path from childhood to his career as a gifted aeronautical engineer, working at the forefront of the technological experimentation of the 1920s and ‘30s. The inspiration for many of the themes and concerns of Shute's novels can be identified in this enjoyable and enlightening memoir.

"Any book by Nevil Shute is a delight." ( Punch)

An interesting view of Aviation History.

An inside view of history from a very accomplished novelist, that helps one to understand not just the time frame but a personal perspective of the start of the Aviation industry, well read with the narration by James Faulkner.

An interesting recollection of an engineer working in the early days of the aero industry and the development of the R 100 airship.

If you have more than a passing interest in engineering and aviation, this is a must.
Excellently written and excellent narrated.

... Into early years of aircraft development. I was hoping to find out more about the man Nevil Shute Norway and though much of this book is about the business of aircraft manufacture, perhaps I do now know some of the personality of the man that I could not glean from his novels. I was surprised to learn that his dedication to his work as an engineer made his writing a secondary pursuit and that he was at the centre of the aircraft industry during what were arguably its most interesting years.

Interesting first hand account of the early days of UK aviation, from the construction of the R100 airship and development of aircraft manufacture to the outbreak of the Second World War.

I've enjoyed Neville Shute for years so it was good to hear of the man's life. Gives a helpful context to enjoy his books even more

This really is a magnificent book. Nevil Shute Norway gives his account of a career as an aeronautical engineer, as implied by the book title, but also as a businessman and novellist. He wrote his novels under the name Nevil Shute because he didn't want his colleagues thinking he was acting frivolously by writing fiction at a time when he was designing aircraft and later running an aircraft manufacturer.

Shute mentions some of his novels in his autobiography, and there are some brief passages on writing, particularly in his early career. However, this particular book is really about his time as an engineer and later a businessman.

There are two substantial parts to this book. First is his account of the R101 airship disaster and its causes (he himself worked directly on the R101's competitor, the private sector designed and built R100). His anger at the loss of life, which he clearly believes was avoidable had political pressures and a failure to follow basic principles of airworthiness not occurred, certainly comes through.

Second is the story of Airspeed, the aircraft constructor Shute established after British involvement in airship design and manufacture ceased following the R101 disaster. Shute is at pains to give an honest account of the realities of establishing a new company with little capital and raising money from investors whilst trying to launch (literally in this case) new products. There are some interesting accounts of those who were buying aircraft in the late 1930s and the purposes to which the machines were destined.

I can certainly recommend this to anybody interested in the early decades of the British aviation industry and relationships between industry and government in that sector in the 1930s and 1940s during the period of rearmament and subsequent total war. Shute is excellent on both the engineering and business aspects. The narrator also does a good job and I thoroughly enjoyed this book.

A glimpse into another era

As an avid reader of Neville Shute books 40years ago I have enjoyed revisiting them with Audio Books in recent months and this autobiography throws light on Shute's own life and how that set the scene for so many of his early books. He makes brief passing reference to various books but this is really about his engineering life. There are one or two rather over long "political " commentaries but even those are quite interesting as a comment on thinking of the time. Not exactly a page turner, and definitely not worth listening to unless you have first read his early works, it does paint a picture of life in the early years of aviation and the middle class view of the world generally. Very un-PC but all the more interesting for that.

I love Shute's novels but found this to be dull.

I am a huge fan of Shute's novels and have enjoyed over a dozen. I was eager to listen to this given the good reviews but was disappointed. This is a fairly straightforward recounting of Shute's business career, focusing on his work launching an aeroship in the UK in the 1920's and then his experience helping launch and run an airplane manufacturer in the 1930's and beyond. There is little detail on his personal life. There are some enjoyable tidbits but they weren't nearly enough to carry the book.

I have really enjoyed Nevil Shute's novels over the years, so I thought his biography would be an interesting read as well as informing of his life. Boy was I wrong. This is more like a dissection of projects he was involved in. There were several chapters about his involvement in the development of an airship for the British government. And much complaining and speculating about how and why things went drastically wrong.

Then he started a period when he tried to start an airplane manufacturing company. I couldn't take anymore and quit. I am returning the book after slogging through a little more than half the book. Especially after I realized that I was not even listening, but treating it as background noise.