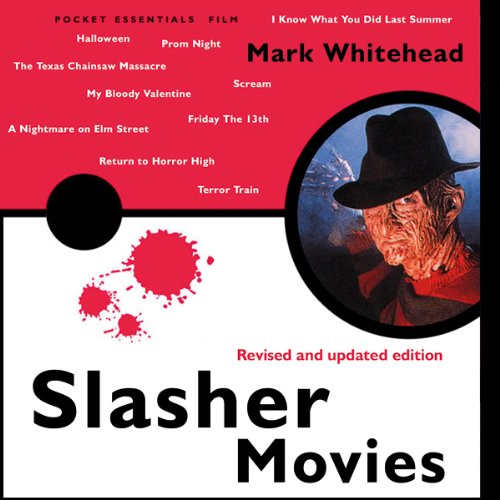 Freddy Krueger, Michael Myers, Jason Voorhees... Sound familiar? In the 1980's these monstrous characters were as popular as Frankenstein, Dracula and the Wolfman had been in the '30's. But they were different. Not the stuff of ancient myths or classic literature, Krueger and Co. were monsters from the backyard of American suburbia - the landscape of slasher movies such as Halloween (1979), Friday the 13th (1980) and the Nightmare on Elm Street series.

Slasher movies took horror to new heights of graphic violence while, in some cases, simultaneously plumbing new depths of camp self-referentiality. They have nonetheless had a lasting impact - from 'respectable' studio pictures such as The Silence of the Lambs (1991) and Single White Female (1992), to the new breed of teen movies such as The Faculty and The Scream franchise, which play knowingly with the conventions of the slasher.

In this Pocket Essential guide you'll find an introductory essay, an in-depth discussion of all the major films, a consideration of the influences on the genre and a checklist of the stars who got their big break being slashed!

The book itself was okay, doesn't really provide information that isn't available in any number of other sources but a decent intro to the genre to those who are looking for it.

I have to say, however, that the narration/production was really bad - I don't think I've even ever listened to an audiobook and noticed the production values before but I did here. The narrator *constantly* mispronounces names and words and even stumbles over his words a few times which makes me think not that it wasn't edited well but that it wasn't edited *at all*.

A 'not bad' book marred by sloppy narration

I would have edited some of the long lists of performers that accompany the movie descriptions. It's ok in print as you can just skip past them, and I don't know anyone who 'reads' them anyway.

It's a fine introduction if you're interested in the genre, or a pretty good overview if you're already a fan. However, apart from maybe uncovering one or two titles you haven't heard of, it's unlikely you'll discover much new here.

Do you think Slasher Movies needs a follow-up book? Why or why not?

Slasher Movies doesn't really need a follow up book because, as a 'quick guide', it covers most big hitters in the genre adequately.

It's a fine book for the price.

Interesting book for those who love the genre. However, the narrator often mispronounces words. For instance, he says bogeyman, like a golf bogey instead of Boogeyman. Lil-a instead of Lie-la. And Sarah Michael Gellar, instead of Sarah Michelle Gellar. Other than that, he isn't a bad narrator. However, he obviously had no interest or idea about the subject he was reading.

Enjoyable, if a bit light.

If you're looking for a serious study of slasher films, this isn't the book you want. But if you just want to talk about some old favorites, take a trip down memory lane, or remind yourself of things you need to put in your Netflix queue, this book will do fine for the purpose. The only real complaint I have about it is that the narrator seems to have a lot of trouble pronouncing names correctly. Some admittedly are tough names, but by the end when he couldn't manage "Brion James" I was yelling at my iPod.