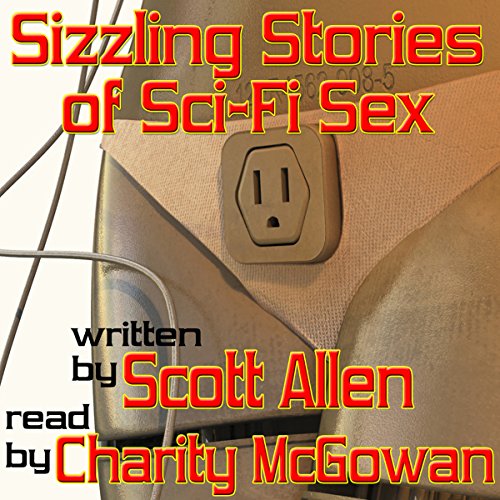 By: Scott Allen
Narrated by: Charity McGowan
Try for £0.00

Stories in this volume:

"The Aliens" - A man spending the summer alone in the Rocky Mountains gets the treat of his life when three sexy aliens crash near his cabin.

"The Genie" - A genie grants one man his wildest sexual wishes. The other one must outwit the genie to get what he wants.

"The Hotel Housekeepers" - A man staying at a hotel eavesdrops on the couple next door making passionate love. But everything is not as it seems.

"Interrupted" - In this novella, time stops for a man who is interrupted just before an orgasm. While the world is frozen, he does what any normal man would do: he gorges himself on any woman he wants.

"Invisible" - A painfully shy man suddenly becomes invisible. He uses his new gift to spy on the woman of his dreams.

What listeners say about Sizzling Stories of Sci-Fi Sex

First, there's no sci-fi in the sizzling stories. I stand corrected, the first one has some aliens in it. However, the title should, I think, be "Nerd Wish Fulfilment Stories." Basically these are the kind of things a teenager comes up with and posts on Literotica, except that the stories there are often better than this. These really do come across as badly proofread, badly imagined, stereotypical nerd fantasy written by someone who is either in their late teens, or is a forty-something, inadequate would-be author. The author knows nothing much about writing erotic fiction either. The majority of the stories have long patches of boring exposition in which the "hero" considers the impossibility of the situation they find themselves in, or points out the irrational physics and then decides to just go with it (thus drawing our attention to the author's plot holes). The sex scenes are mediocre to poor.

The narration would appear to have been done by an automaton. Or by someone reading cooking instructions.

This author actually DOES have sparkles of brilliance spotted in between his majority of garbage, so I can't say it was ALL bad.
For the first story, "Aliens", I honestlt wasn't sure if the material was SUPPOSED to be funny or not. It just came across as a 13-year old virgin boy's wet dream put to text.
On top of all that, the narrator didn't help the material whatsoever. The entire time reading the book, she comes across as extremely uncomfortable to even be speaking such erotic language aloud. Definately not the kind of person you want to read you a sexy story.
Maybe pass on this one unless you want a naughty good laugh.

Absolutely. For what it is (a set of erotica scifi stories) this is an excellent example. What Scott Allen does here is lead the reader through a complete set of scenarios most guys have had at least one of and takes you through how it might happen without being too corny. It will mostly appeal to men as its written from and with a man's eye but there is enough of a spread of the fantasy that at least one of the five stories will get you going. In my case the 5th one wasn't my cup of tea but I can see the value.

What other book might you compare Sizzling Stories of Sci-Fi Sex to and why?

If I knew that I'd be reading that book right now.

(spoliers) Because it was such a sweet moment, I really liked the ending of the Invisible man. I was perhaps the best of the endings... okay, okay, no it wasn't. The aliens ending was the happiest - but still I loved the ending of the invisible man the most. There's something sweet about the way she wanted Steve and always had.

Ummmm, yeah, I don't think they could print what I'd put on the poster. But damn it people its scifi sex with aliens, ghosts and time-stopping sex - if you're not stoked right there then you'd might as well move on.