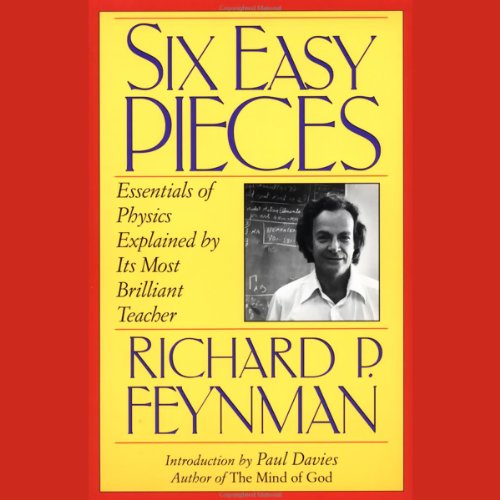 By: Richard P. Feynman
Narrated by: uncredited
Try for £0.00

Designed for non-scientists, Six Easy Pieces is an unparalleled introduction to the world of physics by one of the greatest teachers of all time.

The late Richard P. Feynman was Richard Chace Tolman Professor of Theoretical Physics at the California Institute of Technology. He was awarded the 1965 Nobel Prize for his work on the development of quantum field theory. He was also one of the most famous and beloved figures of the 20th century, both in physics and in the public arena.

"Who would have thought the abiding truths of the universe sound best enunciated in a thick Brooklyn accent?" ( The Wall Street Journal)

Feynman was blessed with insight and enthusiasm and these lectures are part of a genuinely legendary series given in the early 1960s. The sound quality is poor in lecture one, and you obviously don't get the benefit of the pictures on the blackboard, but once you are past that you get to listen in on an undisputed genius performing before an audience in his natural environment. To anybody excited by the edges of knowledge it is like being offered a recording of Mozart practicing his scales and then jamming with a few mates. What is that worth?

An audiobook that is a recording of a lecture on math of Physics is very hard to follow. Unfortunately, the audio quality of this book is extremely poor which makes it even harder to follow

Did Six Easy Pieces inspire you to do anything?

Feynman is amazing but the quality is not

As a physicist myself I have amazing admiration for Richard Feymann and like all physicist I have his collected works on my bookshelf. This audio presentation is a recording of Dick Feymann in the 1960's and the audio quality is terrible. It would have been better to either to have recorded the lectures using an actor or picking lectures where the audio quality is much better.

superb book for anyone interested in the subjects covered. as easy to understand as could be hoped and a pleasure to listen to. the quality is a little poor to start with but listenable and soon improved.

such a crap sound quality

do not purchase unless you have knowledge of sound editing or you are a sound ingeneer yourself. certainly do not honour Richard Feynman great teaching. :-((

the audio is very bad, it ruins the book

i could not finish the book because the audio was such poor quality. it was hard to understand

While I'm sure "Six Easy Pieces" is a fine collection of essays from a brilliant scientist, this audio book version is a terrible presentation of it. The audio quality (taken from the original 1961 lecture series) is so poor that no one could possibly understand it. As such, the audio book seems more like a publisher's attempt to scam readers than an attempt to genuinely educate.

Feyman's own voice Brings these lectures to life!

As a graduate of Natural Science, I took a while to warm up to this one, because I didn't quite realise this was the actual lecture, not a written script - but having re-listened to the first chapter I got into the swing of Feyman's a character and his humour. I'd never even heard of him prior to this book... But I now realise how much of a genius communicator he really was!!

I listened to this as part of a science book club reading list, and I must admit, that I would not have given this book a second glance were it not for that; I'm so glad I did though, as I thoroughly enjoyed it!

Aspects of the science presented in these lectures have been updated since the lectures were recorded, but it was nice to hear how things were taught back when the details of some aspects were less known than they are today.

A thoroughly enjoyable listen, and a masterclass to budding tutors! I just wish I had someone like Feyman as my tutor when I was an Undergraduate!

It?s a real pity but the entire first most important segment (first hour plus) of these recordings is absolutely unintelligible. Not the best way to start a lecture series in my humble opinion. After the first lecture it gets better however the frustration does not end there because Richard P. Feynman makes many references to charts, diagrams, black board and other training aids in his lectures and continually makes reference to these charts and to the first unintelligible hour of the lecture. For you die hard collectors this may be a worthwhile investment but I?m more interested in learning at this point.

The first hour is inexcusably poor and any $39 audio editing program could fix it. What you lose in that hour is the first layer of the foundation of physics that Feynman lays down. What you get after that first hour is pure magic. Hearing the actual voice of Feynman confirms what many of his peers said about him. His vigor, humor, and genius shine throughout.

Basics from a Master

The book consists of six lectures, I have the the paperback version also and notices a lot of the introductory material was not included in this audio. And of course the diagrams you don't get the in audio. But neverthless I enjoyed the read and gave the lectures 4 stars. Overall 3 stars. If you don't like science don't buy this book.

They don't make it obvious, but these are recordings of a select group of Richard Feynman's actual lectures. They tried to fix up the audio form one damaged reel at the beginning, but its a little rough. For the most part the audio is good to great. Very engaging. Sometimes hard to follow without being able to see his diagrams etc..

NO EASY PIECES OF PIE

These lectures should be accompanied with the illustrations that the professor uses for illustrative purposes. Thus it would be good to listen to the lectures while viewing a book that has the diagrams.

The audio quality of the first lecture is very poor. The technology should exist for enhancement. If that isn't possible, then a professional reader should be inserted.

Although the lectures were designed for the non-physics student. As a non-physics major, I found some of the material very difficult to understand.

This book will require considerable effort on the part of the listener.

The sound quality of the first lecture was horrendous. The others are fine. However, Feynman regularly refers to visual aids (you can even hear the chalk against the chalk board on occasion), and without the benefit of those aids I found his lectures hard to follow. I think others without any physics training will also find them hard to follow.

The sound on this audiobook is very rough. I can barely make out what Dr. Feynman is saying. It would be better to read the book as opposed to listening to the audiobook for this one.

Feynman is a genius and his lectures

are absolutely wonderful. No nonsense, high-standards lecturing. He doesn't sound like a brilliant physicist, he sounds like a guy just explaining how a motor runs.

When he speaks, everything falls into place with an astonishing straightforward ease, that has its roots in a simple approach: take what you have and deal with it! His notions on Philosophy and example anecdotes about transforming the problems of physics into our real life (conservation of energy:-), show a childlike mind, that has no problem at all with the fact that there are more questions than answers. He is jumping on the shoulders of the giants (the short history of physics) and is simply happy to have a new perspective, new facts to deal with,
whatever they are. He is inspiring, using everyday language to explain complex facts and relations, giving you also a new way of perception and fun in dealing with it.
I really wish I had a physics teacher like him......

It's very hard to make out what he's saying because the sound is so dirty. they should have had someone replicate his speach or use modern tech to recreate the audio in his voice.