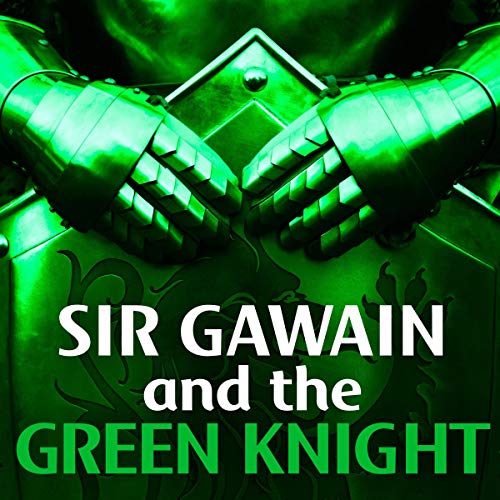 Sir Gawain and the Green Knight

By: Creative Content
Narrated by: David Rintoul
Try for £0.00

A New Year challenge goes horribly wrong for one noble knight of the Round Table.

King Arthur loved Christmas and New Year - it was an excellent excuse for feasting, exchanging gifts and a time for general good fellowship among the knights at Camelot. And he wouldn't stop feasting until some marvellous adventure had befallen either him or one of his companions.

One year, there was an adventure to top the lot. An enormous knight rides into the hall dressed in green. Everything is green. His hair and beard are green. Even his horse is green. "Great outfit", says King Arthur, "What is your name, Sir Knight?". "I am known as 'The Green Knight'", replies the stranger to no-one's surprise, and proposes that someone in the court strikes him once with his axe, on condition that the Green Knight can return the blow one year and one day later.

Gawain volunteers, picks up an axe, and lops off the Green Knight's head, thinking this will mark the end of a rather stupid game. But no. Cool as you like, the Green Knight picks up his head, reminds Gawain of his promise, and rides off, leaving the entire Round Table gawping in amazement and Gawain rather apprehensive about what will happen in 366 days' time ...

This wonderful, good-natured adventure was written sometime in the late 14th century by an excellent poet based, we think, somewhere in Cheshire. Not only has the tale come down to us intact (unlike much Arthurian literature), it has captured readers' (and listeners') imaginations for over 600 years. Tolkien was a fan and produced a translation from the Middle English, and Sean Connery starred as the Green Knight in a 1984 movie. What you'll hear on this audio is a faithful translation of the original by Jessie L. Weston, a scholar and poetess of whom TS Eliot was much enamoured.

What listeners say about Sir Gawain and the Green Knight

If you like stories set in the medieval period you should like this audio book as the story is great and the narrator did a great job.

Great quality for a great price!

Loved this version and the narrator's voice is very pleasant. Sound was great and volume consistent.

A tale of danger and knightly valor and honor

This book sat on my shelf for 40 years. Why not listen to a narration while driving to work. Glad I did. Still enjoyed it with the same youthful enthusiasm of long ago.

Well made and couldn't have been dreamt or written better. Takes one back to the days of childhood and the tales one would live by, and dream to.

Would you try another book from Creative Content and/or David Rintoul?

Why this was helpful and very well read, it was not the original version. I got lost a few times as I followed along with the original reading.

The trial of Honor of the Knights code

Not my favorite Arthurian legend but it is still a good one. The performance was excellent and I would suggest this to anyone who is fascinated with old stories of knights and legends of the Round Table.

I've been an audible member for some time. I like the selection and the quality of many of the readers. There's a certain magic when the readers voice and voice of the author match that elevates the experience of reading a text through audiobook exponentially.

My case in point is lyrical prose, it has become a guilty pleasure that I saver. Chaucer, Milton, Byron and Tennyson are wonderful productions and many other poets are given a wonderful and vivacious reading here also.

The concentration of style, meaning and emotion in poetry is unsurpassed in other literary forms. If you have been drawn to this honesty and power but not fully satisfied through your own readings then I suggest you try the many masterful readings available here on audible.com.