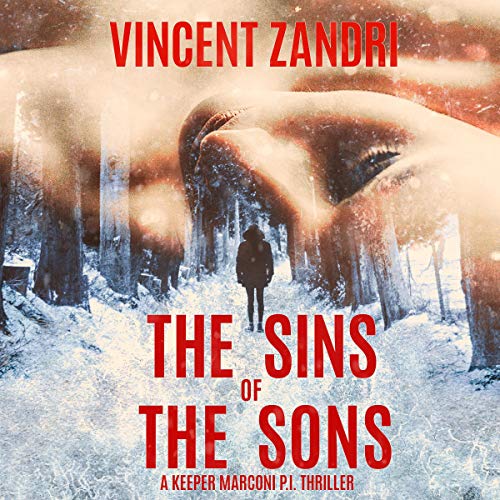 Sins of the Sons: A Gripping Hard-Boiled Mystery

Sins of the Sons: A Gripping Hard-Boiled Mystery

By: Vincent Zandri
Narrated by: Andrew B. Wehrlen

Can you ever really bury the past? On a cold November evening back in 1982, real estate lawyer Marty Finnegan and socialite Tracy Reynolds were seen fighting outside the dining room of the Wolforts Roost Country Club. Unbeknownst to them, three drunken teenage boys who attend the same prep school were witnessing their bitter exchange under the cover of darkness. When the boys decide to head out on a joyride that includes holding up Finnegan at gunpoint, their lives take a turn for the worse. Less than 24 hours later, the lawyer will be discovered dead in a patch of woods near his home. He died in subzero temperatures, without having worn a coat or boots, his car parked miles away in an airport parking garage.

Now, it’s 35 years later, and one of the “boys” involved in the original 1982 holdup has found God, and he is about to confess their story to the whole world. But another one of the now middle-aged boys is bent on doing everything in his power to stop the confession. Enter Keeper Marconi, PI, who will reluctantly take on the job of persuading the confessor to keep his mouth shut. But at the same time, the police hire Marconi to delve deeper into the Marty Finnegan cold case file. They want him to determine once and for all if the lawyer simply died while out for a walk in the freezing cold, or was he murdered in cold blood?

P.I Jack Marconi, known as Keeper was asked by a new client to speak with an old school friend who had now joined a religious organisation and was about to make public an incident that happened 35 years ago. The client who is now a wealthy man, told Keeper that when the was in prep school, himself and two friends who had too much to drink one night, set out to threaten a man named Marty Finnigan into paying back the money he had taken from his now ex-girlfriend. Only the thing was Finnigan was found dead the next day. It was said that the he had gone for a walk in the freezing cold at night and ended up having a heart attack which killed him. Now one of the three young men was dead and the other was about to go public with what had happened that night. The client wanted Keeper to speak to this man and stop him from telling all. Together with his friend Blood they set out to do just that. But things are not as they seem, and opened up a can of worms for Keeper. A good thriller with an intriguing plot. The only thing I didn’t like was the speed with which the narrator whipped through the story, took all the atmosphere out of it.

The Bridge of Sighs.

The dream team of author Vincent Zandri and narrator Andrew B Wehrlen return with another P.I. Jack (Keeper) Marconi investigation, this time following up on a 35 years old cold case where the dead man had died of natural causes according to the local police. But it's an odd one, naturally, since the now wealthy client had admitted to Keeper of robbing the man that same night with two close friends, one of whom had recently died and the other was about to go public with the details. The client wanted this second friend stopped - it would ruin his reputation - and was willing to pay well to make him change this mind.
Keeper, miserable at the loss of girlfriend, Val, who'd left him for someone more tender and with a big house, and drinking heavily to drown his sorrows, together with Blood starts nosing around, backed by Detective Miller who remembered the case from when he was a young cop. This is another full bodied noir thriller of the old school, great characters and intriguing plot, all brought to life through Mr.Wehrlen's pacey interpretive narration. Great characters, great story, great performance. And supposedly based on a true story. Just a pity that it had to end so soon.

My thanks to the rights holder of Sins of the Sons, who, at my request, freely gifted me with a complimentary copy, via Audiobook Boom. For all who like their detectives damaged and enjoy the noir, highly recommended.


Thirty five years ago a man died of an apparent heart attack. Was it just a heart attack, was he scared to death, or was it a deliberate murder? Three teens, now middle-aged men, may have had something to do with it. Unfortunately, it appears that they are becoming murder victims. What happened after 35 years to bring this event back to the attention of the police? Like all good mysteries, the ending is unexpected. Although part of a series, this can be read as a standalone. I was gifted this book by the author.  I was gifted this from the author.

SINS OF THE SONS
Marconi, trying to find solace in his whiskey, after Val left. When Jim came to see him, one of the three amigo from high school, and one has now died, Marconi adds, and the past has now come back to haunt you. Steve has found religion, and now wants to go forward and tell what happened. The Three was involved in an incident that turned badly when in high school. Marty Finnegan said to have died of heart attack. Publicity would ruin him, his wife and children as well as Steve’s. If it became known what part they played. Jim wants Marconi to go see Steve and persuade him to keep quiet. This was just. the beginning,there was more players, a more bitter vendetta in play. How Marconi handles this plot, is full of twists and turns. Readers will be glad they read. Given audio for my voluntary review and my honest opinion.

This is the seventh book in the Jack Marconi series. I have not read any of the prior books in this series. I found this book to be a standalone with no cliffhanger ending. I had no trouble following the characters/motivations or the story line not having read the previous books. There were some references to prior events, which were brief and had no real effect on the current action. I believe that these prior events were likely from the prior books in the series.

This is a fast-action type of book - a bit formulaic but enjoyable nonetheless. A death which seemed suspicious but ruled to be of natural causes comes back to haunt a trio of men - one who recently died and one who has found religion and wants to confess his soul. Jack becomes involved when he is hired by the third man to keep the secret of the man's death buried. But you know the old riddle of how to keep a secret between three people... There are some good twists which will keep you guessing.

The narrator, Andrew Wehrlen, did a good job and kept a good pace narrating.

This is a well assembled thriller/mystery, with some great characters. Some of these appear in some of Zandri's other series, which you can expect since they are almost all set in the same city. I particularly like Blood...a great sidekick for any PI.

Basically, if you have read any of Zandri's books, you know what to expect.

I would recommend getting this in the Jack Marconi boxed set to get three books instead of just one.

I was given a free copy of this book with no requirement that I leave a review. But this one is worth a good review.

Jack "Keeper" Marconi Book 7
3 boys hold up a man at gunpoint; a day later he is found dead and remained a cold case. 35 years later, one of the boys wants to confess, one wants to keep the secrets buried, and one is dead. PI Jack ends up on the case with a detective to find out the truth.

This is my first experience of the author and the series. I found it a gripping and good thriller with interesting characters and an intriguing case to be solved. There were good plot twists that were clever and entertaining. The writing was good, but  is probably not suitable for young or sensitive listeners. The performance was enjoyable and I would recommend this book. I look forward to hearing more from the author.

I thoroughly enjoyed this...The narrator was pretty good. A little dull..very monotone..but the story kept me on edge. Sadly this story actually happens at times...you see it on the news now and again. The ending totally surprised me. I love Keeper....he is my kinda guy!

Well written, gripping, smooth, fast paced. I absolutely enjoyed this story. It kept my interest through the the whole thing, I couldn't stop listening. The storyline and the characters were well thought out. The narrator did a great job bringing it all to life. I recommend it to all. I received it as a gift and this is my honest review.

This book has it all! A murder mystery, witty conversations and some sex! I really enjoyed listening to this one!

My second read/listen from author Vincent Zandri. Although I own several of his books I'd never read one until I read Chase Baker & the Spear of Destiny. I was given an Audible copy of this book & am voluntarily reviewing it. The excitement, intrigue & suspense of a thrilling detective read! (RIP Marley January 20, 2014 - July 24, 2018).

Held my attention throughout.

Andrew B. Wehrlen did a great job bringing the characters to life with his narrating.