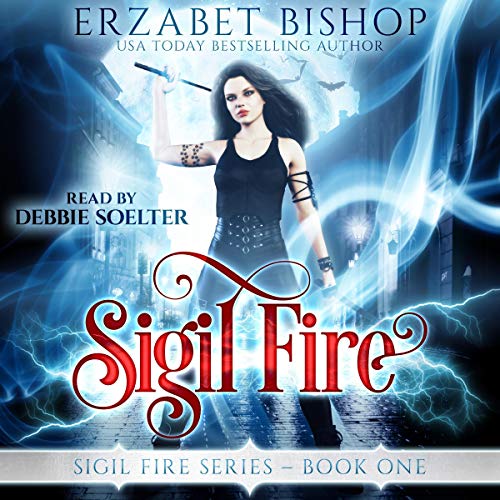 By: Erzabet Bishop
Narrated by: Debbie Soelter
Try for £0.00

Enter this urban fantasy world with fallen angels, witches, vampires, and succubi, where shadows hold more than just empty promises of the night!

Sonia is a succubus with one goal: stay off Hell’s radar. But when succubi start to die, including her sometimes lover Jeannie, she’s drawn into a battle between good and evil and a past that isn’t ready to let her go.

Fae is a blood witch-turned-vampire, running a tattoo parlor and trading her craft for blood. She notices that something isn’t right on the streets of her city. The denizens of Hell are restless.

With the aid of her nest mate Perry and his partner Charley, she races against time before the next victim falls. The killer has a target in his sights, and Sonia might not live to see the dawn.

Sigil Fire is a refreshing and well-written dark urban fantasy with incredible world-building. Erzabet Bishop packed quite a bit in into three hours; I'm very impressed with her style. Character development is excellent, consisting of supernatural creatures, mainly vampires, witches, and succubus. Some mythology is introduced; however, given the length, it didn't go too in-depth. The Succubi are dying, and the main characters are in search of the killer. The mystery of the murderer is definitely intriguing, keeping the readers/listeners engaged.

Debbie Soelter did a brilliant job with the narration, capturing the characters' nuances and bringing them to life. Overall, this was a fantastic listen, one I'd definitely recommend.

This is such a unique and interesting story. The characters are so well written and I want to listen to more. The story touches on some mythology but it’s also the authors twists on it make it so much more enjoyable.

I loved the narration and the Quirks and individuality that the narrator was able to give each character moved it from a great story to an amazing story. Definitely worth listening to I know it’s one I will be re-listening to

Dark fantasy. Someone or something is hunting and killing succubus, stealing the souls they've collected. I enjoyed this book, I particularly enjoyed the history of how the succubus originated!

first time listening and/or read from Erzabet Bishop. The narration was ok (sounded a little robotic) but overall I did like the story as a whole.

If you're a paranormal romance fan you'll definitely enjoy this book.
This book is packed with action & sensuality, murder & mayhem!
The writing excellent!

I received this book for free for a honest review.  I loved the characters and storyline. oh my stars ☆☆☆☆ sexy, hot, mystery. I loved Sonya and Faye! it flowed very well and held together.  The narrator did an excellent job of bringing the characters to life.  reccomend