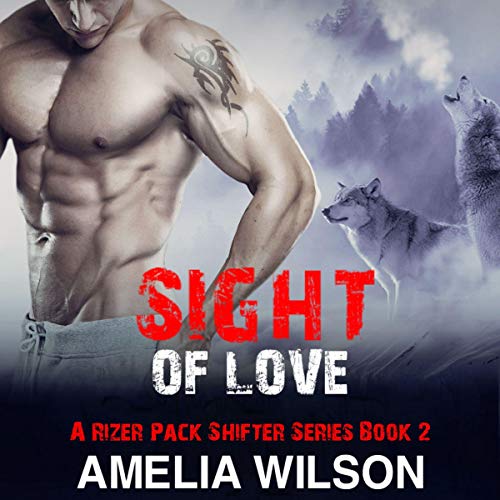 By: Amelia Wilson
Narrated by: Stacy Hinkle
Try for £0.00

What price is too high, if it means having visions of the future?

This is a standalone with a happily ever after ending and no cliffhanger.

Angeline Synet and her family have just moved to Freebasin, a town that has formed an alliance with the shifters from the Rizer wolf pack. Angeline has a gift, the gift of sight. She has visions that give her glimpses into the future. Her visions have cost her family trouble in the past, and they don’t want her to use her gift.

When a kidnapping and string of murders is uncovered, Angeline can’t ignore her visions any longer. She’s taking risks, doing everything she can to save the people in her visions, even if it means breaking rules and trespassing onto the Rizer pack land.

Killian, a werewolf shifter, hasn’t forgotten the senseless violence mankind is capable of committing. He doesn’t like non-shifters, and he has no interest in helping them. When Angeline is found on Rizer land, Killian is burdened with the responsibility of escorting Angeline from their property. It doesn’t take long before Killian finds himself tangled up in Angeline’s problems and caring about what will become of her.

Killian is stubborn. Will he realize too late that holding onto his hatred for non-shifters will cost him his only chance at happiness?

What listeners say about Sight of Love

Boy what a fun book to listen to! I’ve read a few of Amelia’s books before but not audible. Absolutely excellent! I love the hate love relationship that grows into such passion! And FYI you won’t believe the end!! Now onto the next book!!

A very intriguing shifter, murder mystery, love story which is well worth listening to. The narration is brilliant and easy to listen to, with distinct voices for each character.

I really enjoyed this. The narrator did a great job and I love how well developed the characters were. I would definitely recommend reading or listening to this story for anyone that enjoys PNR.

I have now listened to the entire series it was well worth it. The stories were well written and the characters were entertaining. Now I will need to find more of Amelia Wilson books.

fantastic read, kept me in twine with the story, I loved it, on to the next.

loved the story and worth the credit

Just enough suspense and lust in this story. It was nice to hear a 'who done it' story with a shifter romance twist. Sometimes going back to an original idea works best.

Is her gift a blessing or a curse?

This is the first book that I have "read" in this series (I listened to the Audible audio book). I am sure I would have known more about the pack and the town if I had read the first book, but this one had enough information to make it stand alone. Angeline and her family have had problems living in other places due to Angeline's "gift" of the Sight.. When she rescues a girl from a serial killer she gets caught on pack land and meets the pack healer, Killian. Killian is not trusting of humans. He has been burned before, badly, and does not plan on a repeat. Unfortunately, he can't get Angeline out of his head. It seems his caution will prove to be correct when the townspeople are suspicious of the pack when the Alpha's mate takes the kidnapped girl home, unconscious from the drug Killian gave her to numb the pain of her injuries. When Angeline refuses to admit that she was the one who found the girl, Killian is angry. A pack member is killed and tensions escalate. Then another girl is taken....

I was given this audio book for free by the author. I own the ebook. My review is voluntary.

Love this series. it is very well narrated and constructed. the characters have depth and the books can stand alone. The books are better as a series, you get the back story.

Everyone struggles, but this story has you wanting both main characters to overcome theirs to find what they need!

Sight of Love
By: Amelia Wilson
Narrated by: Stacy Hinkle

*Audible Review*
I really enjoyed this book. This story captivates you and draws you in from the beginning. The author did a great job of developing the characters and their interesting personalities; the storyline flowed smoothly and is well written. I highly recommend this book it's definitely well worth the read.

Stay Hinkle's narration was wonderful, if she is narrating then I will definitely download and listen.

I received an advance reader copy of this book and am voluntarily leaving a review.

Second book in the series is once again full of action, romance, and intrigue. Angeline and her family come to Freebasin after they were run out of another town because of her visions of the future. She can't resist helping people in need no matter what trouble it brings to her family. Killian is the doctor for the Rizer Wolf Pack, and despises humans for their role in his old alpha's death and resents that he is required to help any of them he finds in need of his services. When Angeline's visions lead her to rescue a woman from the hands of a killer, her path crosses with Killian and the pack. But when it's discovered that there is a serial killer in Freebasin, tensions rise between the humans and the pack. Just how far with each of them go for those they love? And will they discover the killer before it's too late?
The narrator does an amazing job bringing this story to life. Her narration is full of animation and emotion letting you really feel like you're part of the story.

It had the same intensity of book 1! I love that although it had a sense of continuity but this was really unique and a complete standalone. It was so intense and I didn’t expect that twist! I loved listening to the suspense unfold.