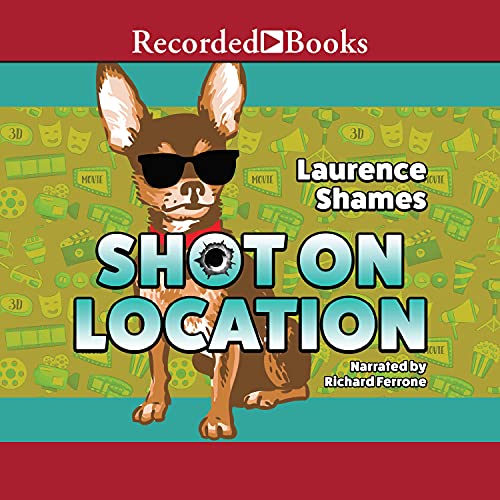 By: Laurence Shames
Narrated by: Richard Ferrone
Try for £0.00

Take three speedboats, a disgruntled ghostwriter, and a hit TV show starring a gorgeous but impossible diva and created by a driven genius who may be losing his marbles. Add a fearless and gleefully profane stuntwoman, an ancient Mafioso with a chihuahua, and a revenge-crazed blonde in gladiator sandals. Stir in a thug with a heart of gold and an inveterate slacker who yearns for glory. Whisk a loopy but tender romance into the mix, turn the whole crew loose in the liberating and seductive sunshine of the Florida Keys - and what do you have? Shot on Location, the new and long-awaited Key West novel by Laurence Shames. Hilarious and suspenseful, wisecracking and wise, this is the most intoxicating story yet from the author of such cult classics as Florida Straits and Sunburn. Longtime Shames fans will rejoice at his return to the fictional turf of Key West and the reappearance of some of his most beloved characters. And new listeners will find themselves in for a hell of a ride as Hollywood glitz meets Florida funky.

What listeners say about Shot on Location

The blurb made this sound like a Carl Hiassen caper, but sadly, not even one of my favourite narrators, Richard Ferrone, could reach those heights.

A whodunnit on a film set, not that great, sorry.

Bert the Shirt returns! And with Giovanni, too!

Would you listen to Shot on Location again? Why?

I absolutely would, and will. I look forward to every new book by Lawrence Shames. This guy will make you laugh under any circumstance you might be in, no matter how dark or gloomy. I guarantee satisfaction. All his books are set in Key West, which has to be where Mr. Shames lives. He describes it beautifully. The main character is typically a New Yorker. The Mob is always involved. Some of the characters are continuing. Bert the Shirt is my favorite. Bert is now a very old ex-mobster who wears exquisitely tailored shirts, and who carries around his tiny, sickly Mexican Chihuahua everywhere. Richard Ferrone is also an excellent narrator, delivering each chuckle and smile with expert timing and great accents. The plots are all variations on a theme, but somehow Mr. Shames makes them fresh. He does not repeat the jokes, which, when you think about it, after five or six novels set in the same place, is quite an achievement. There is a plot, which is not just an excuse for the humor. Each time I read one of Mr. Shames's books I feel like I have taken a small vacation in Key West. I don't believe I'd like the humidity, but everything else about the place sounds like paradise.

What was one of the most memorable moments of Shot on Location?

I love the romantic scenes between Jake, the main character, and like Shames an ex-New Yorker who is a writer, and Claire, who is an executive and all-around gofer for a TV program which is aptly called Adrift. Shames can write romance in a gentle way, giving us the small details which ring so true. I liked best the restaurant scene in which Claire and Jake share a tiramisu with a slice of mango. At just the exact same moment, the two put their forks into the dessert, and the tines touch in a small but electric way. I obviously can't write like Mr. Shames does, but read it for yourself. He is a charming and witty guy.

I think I just answered that question. There are many of them. One comes very early in the book, and sets up the whole plot, and I won't ruin it for you.

No. I can't do that. It would involve sitting in one place, or lying down, and devoting all of my attention for many hours. It would resemble how kids devour TV programs they like: they sit there and gorge on twenty episodes, something like Scrubs, for instance. My rear end would get very tired, and I think I would get tired all over. It's nice to have another segment to look forward to.

Buy this book. Have fun. Humor like this needs no justification. It is pure fun, which I believe is exactly what Mr. Shames is going for.

Another tale far from Mainstream, excellent!

Another good one by Laurence Shames

I enjoy all the books by Laurence Shames and the recurring characters in the stories.

Surprisingly good book for a long one day drive.

This is a clever plot driven book about the television/publicity industry. I needed something to keep me engaged on a 12 hour drive. This worked quite well. Fun characters. Not too many plot flaws. It helped that I had been to Key West where the story takes place but its not necessary to enjoy the book.

I made it home safely and never got tired.

This book is kinda mediocre. It's OK.. nothing wrong with it. A nice story with fun characters. I just can't say it's great in any way. Not a lot of great action. Not a lot of laugh out loud moments. Not a brilliant story. The reader sounds like he is in his 60's.. he's not bad but not great. The best I can say is that there are a lot of plot twists. If you have read all the really great books and are just looking for something to pass the time, this might work for ya....