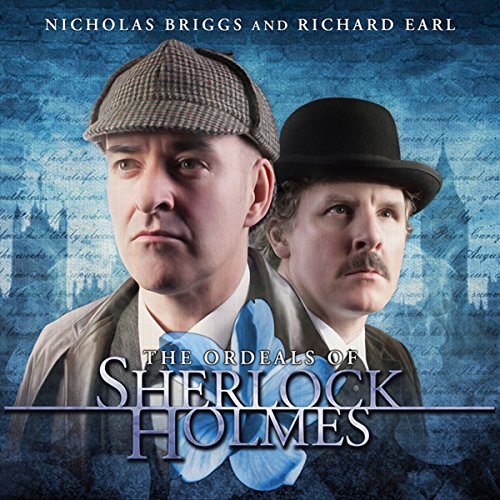 By: Jonathan Barnes
Narrated by: Nicholas Briggs,Richard Earl
Try for £0.00

From the plains of Afghanistan to the alleyways of Victorian London, from the dark heart of the English countryside to the ruin of Europe after the Great War, join Sherlock Holmes and Dr John Watson in a quartet of astonishing new investigations which span their lifelong friendship and beyond....

"Briggs and Earl now a definitive audio Holmes and Watson." (Sci-Fi Bulletin)
"Nicholas Briggs and Richard Earl are, as ever, sublime in the roles that they have made their own." (Tim, Mass Movement)
"Briggs, Earl and Barnes, director Ken Bentley and the rest of the fine cast are to be congratulated." (Roger Johnson, Sherlock Holmes Gazette)
"Nicholas Briggs and Richard Earl, now a firmly established team...." (Sherlock Holmes Journal)

unsatisfactory acting and unconvincing... Did not enjoy this presentation... Felt the acting was somewhat excessive and over excadurated..

This is by far my favourite.

This has very clever writing and the performances are outstanding.

What does Nicholas Briggs and Richard Earl bring to the story that you wouldn’t experience if you had only read the book?

The actors portrayal brings the story to life - it is like having Holmes and Watson on the room with you!

More akin to a full dramatisation than a 'narrated' audio book, these are pretty decent tales. Certainly much better than the original pastiches Bert Coules churned out at the end of the BBC collections.

Obviously not as good as classic ACD, but there is definitely strong parallels with e.g The Crooked Man and maybe A Study In Scarlet or the Resident Patient. Anyway, the writers have done a petty good job.

I would say however that these don't really work in the Audible format. There are four stories on here, about 80 chapters - but none of the chapters are named, so you can't eg fall asleep when the story ends because you don't know which chapter is which.

Also there is interviews with the authors between the stories - this kind of breaks the 4th wall and sounds like an ego massage exercise for the writers. No offence chaps but do we need an interview with you? It takes away from the pleasure of getting lost in the stories.

If each story was in its own chapter, that would be much more practical. As it stands this is the first and last Big Finish production I'll get through Audible - it's just a weak platform.

I could not take to this format and found the stories just wrong for Sherlock and Watson. Also dont know why each actor had to introduce themselves either.

Very enjoyable performances and well written, it's a delicate balance to keep the feel of past times without the more overt and dated attitudes spoiling the story, yet Jonathan Barnes manages it with the dexterity of a tightrope performer.

WE ARE SO ACCUSTOMED TO HIS SUCCESSES, HOWEVER…..

Everything contributed to the success of this production: the theme music was somber, but active and moving, creating interest, even intrigue; the sound effects very good; the writing creatively contiguous, while the story wove together and back on itself, the acting excellent. However, I was not prepared for the intense sadness I would feel. Didn't Holmes admit his imperfections in cases unsolved? Yes, but the authors here make us understand in our gut, the consequences as Dr. Watson never before wrote to those with whom Holmes interacted, and
with those whom he was trying to save. The good, often costly, still seemed to outweigh the
bad, until now.

It appears to be a series of unrelated stories, starting very interestingly with Dr. Watson in Afghanistan, trying to save a British citizen or officer sequestered amoung some natives. It is really too late, especially without proper medicines, but seems to end well, with Dr. Watson's life unimperiled, and only a small package to deliver somewhere in London upon his return. The next story, again, seemingly unrelated, is soon revealed to be absolutely, but somewhat mysteriously
connected; and so, too with the next stories.

My recommendation would be to listen to less than the whole train of tales at once. As before mentioned, I became so sad at Holmes' remorse, and truly humble admittance of misjudgment to
the man he would have aided, I cried myself. Same with the next story. If you can remain blythe in the face of such pain, then you may want to finish it all the way through. The stories are each
unique, like differently cut precious gems on a necklace, but you will understand what connects them.

At this writing, I have not finished the last story, where Holmes' and Watson's relationship seems to have changed somewhat, perhaps more toward an equilibrium of truer mutual respect, but it will be a while before my desire to go back into such emotional desolation - no, that's a bit too strong but bear with- has recharged itself.

Sounds just like watching a movie but no picture!

Most of Big Finish productions are simply amazing as its not just a narrator reading a story, but everything is acted out with special sound effects used. Really makes you feel like its a movie/show but your not looking at the TV. I can easily see everything in my head. I started listening to Big Finish with the Doctor Who stories but saw they had Sherlock Holmes too and always loved him, so I tried this one out. Was so worth it and now want ALL of them!

Sherlock is alive and well

Just when you think nothing more can be said about the old slueth and his sidekick, they're back! And there is nothing to disappoint in this fast-paced, beautifully organized tale that spans nations and ends up with a most excellent surprise!

The plots of these faux-Holmes stories are not bad, though the attempt to update and modernize the sensibility is wrong-headed.And why in the world would the producers imagine that listeners want to hear the actors chatting informally about the stories between each episode? A very self-satisfied lot they are, too.