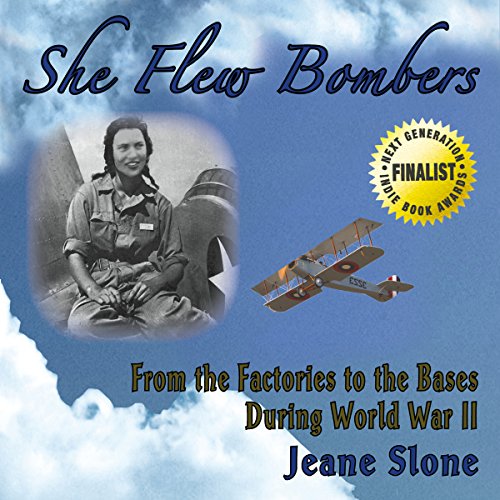 A funny, sad, and heroic historical fiction about heroine Violet Willey and her colleagues who join the experimental civil service organization, the Women Air Force Service Pilots. All the escapades from meeting the Soviet Night Witches to brushes with death and sabotage are based on fact. These daring young women fight against gender discrimination as they portray a vital role for a nation in crisis.

What listeners say about She Flew Bombers

couldn't listen to the narrators voice

only listened for a couple of minutes before having to stop. the narrators voice is terrible and completely spoiled it. listen to the sample before buying this book, I wish I had!

The story could have been enjoyable but the narration was excruciating to listen to. Audible should screen the performances.

Would you consider the audio edition of She Flew Bombers to be better than the print version?

I read "She Flew Bombers" when it was released in 2012. I learned so much about the WASPS and their role in WW2. When I learned it was released on audio, I thought it would be great to relive the trials and tribulations of Violet. I felt the cadence of the audio was slow at the start but then I got in to the rhythm and liked the pace. Ms. Sloane does a great job changing her voice to match the characters. Thoroughly enjoyable.

It's important to share the important roles women have had in history. I found the story of the WASPS fascinating.

Would you listen to She Flew Bombers again? Why?

You can tell the author did the research. Very informative and the style of reading makes you feel like you are really there!

Where does She Flew Bombers rank among all the audiobooks you’ve listened to so far?

This audio book is a perfect travel companion. While I first had a fleeting concern that the slightly slower-paced than usual diction would interfere, it was quite a relief to understand everything said the first time and to do no re-listening to catch the conversation and events. The voice varied for the different characters, and moved along smoothly. The content was both informative and interesting, and left me feeling I understood what a woman had to go through in a man's world to have a skill in high demand, but to be held in such lower regard only because of one's sex. A must read for those who love historical fiction and who wish a deeper comprehension of what is was and still is to be a woman with a deep passion to live life fully under the not so invisible glass ceiling. I give it an excellent ranking.

I truly enjoyed how real the characters felt...normal people doing exceptional things to meet the demands of the times.

Clear enunciation with voice variation allows one to easily follow the story and know who is the speaker.

If you could rename She Flew Bombers, what would you call it?

She Flew in Combat, but of course that was not allowed for U.S. aviatrices.

This story doesn't begin to soar for a few chapters, as the author is meticulously laying down the groundwork of the characters, so hang in there...it will take off.

Waste of Time and Money

What would have made She Flew Bombers better?

The narrator (author) is SO BAD at reading the story I could not listen to it. I had to stop after the first few minutes. She talks so slow and in a manner that sounds like she is reading to preschoolers it made me nuts