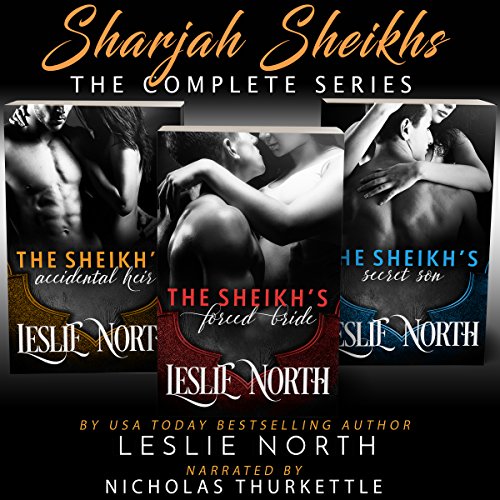 Three wealthy Sheikhs are involved in a hell-raising event during a diplomatic tour in the US. Their father, Sultan bin Mohammed Al-Qasimi, orders they show a more mature side and settle down - that they get married, or be disinherited! Sharjah Sheikhs: The Complete Series includes three sexy books: The Sheikh's Forced Bride, The Sheikh's Accidental Heir, and The Sheikh's Secret Son.

What listeners say about Sharjah Sheikhs: The Complete Series

yes to the Sharjah brothers

I enjoy reading / listening to Ms. North's stories. They are interesting, with captivating characters. This series is no different.

Taking three brothers used to having their way, their father intent on seeing them married. Life gets them paired off with strong women who will not bow to them but steal their hearts nonetheless. See sparks fly but the stories end in HEA, my fave kind.
In book 1, "The Sheikh’s Forced Bride", Khalid manages to avoid the arranged marriage thanks to Casey, a journalist.
In book 2, "The Sheikhs Accidental Heir", Ahmed is in NYC on business where he meets Melanie, the party caterer with whom he has a fling, falls in love then almost looses her.
In book 3, "The Sheikh's Secret Son", Zaid and Rebecca's fling ends with consequences he finds out 5 years later when she visit his country on a business trip.

My first listen from Mr. Thurkettle, he did a wonderful job in portraying the male characters, great accents and tone, the women's voices were believable, despite not giving them high pitched ones. Enjoyable few hours.

I was given this free review copy audiobook at my request and this review is voluntary.

the series was so very and extremely fantastic OMG I loved it I think Leslie North will be one of my favorite authors from now on the stories are so interesting and so well-written OMG
I was given this free review copy audiobook at my request and have voluntarily left this review.

Everyone Needs A Sheikh!

I have had the pleasure of listening to several of Leslie North's books and the Sharjah Sheikhs series doesn't disappoint. The writing is always on point and keeps you captivated until the very end.

Nicholas Thurkettle has an amazing voice that pulls you in. I would not hesitate to listen to him read a grocery list.

I received this audio free in exchange for a fair and honest review.

"I was given this free review copy audiobook at my request, via Audiobook Boom, and have voluntarily left this review."
Nice set of romances about three brothers. The father is determined to marry them to women he has chosen and they are just as determined to marry for love and who they choose. The antics are interesting on both sides. The narrator brought the stories to life and made them fun. Each story had the same central theme but was handled in a different manner. If you like sex with your romance then you got it in these.

I want a Sheikh!

I loved every one of these stories. And was thrilled it was the entire set! The writing is very good and the stories keep your interest from beginning to end.

This is the first time I've listened to this narrator. To say the least... He does a wonderful job and his voice is very expressive making the audible so much more enjoyable.

All 3 books have the same story told with different names. Three Sheikhs fell in love with 3 Americans in record time. One book was enough to get the idea. Not worth the time listening over 9 hrs of the exact same thing.

Sharjah Sheikhs Series is great! I love sheikhs and brother's stories! Each story is sweet and sexy, with great characters, interesting storyline, and a beautiful happy ending. Leslie North never disappoint! Nicholas Thurkettle did a great job with the narration. I enjoyed my listening.

All three of the books were so great to read. They sucked me in from the very beginning to the end. Each one had me reading until I couldn't hold my eyes open!!! Fantastic stories!!!!

Three Brothers Sharjah Sheikhs Partied Too Much, The Hammer Came Down

I received a copy for an honest and voluntary review.
First of all the narrator has a very sexy accented and deep voice for the men (sigh) and does an nice job for the women, not going overboard on a high voice.
Three different brothers who all partied, got playboy reputations and their father is fed up with it and wants to arrange their marriages to appropriate women...well they all fall for American women .
First story, The a Sheikh’s Forced Bride is with Khalid who,is actually waiting for his arranged marriage bride (or he’ll be kicked out of the family) when a journalist, Casey, interrupts. So begins their eventual love story.
The second story is the Sheikhs Accidental Heir. Ahmed is in NYC on Business as forced by his father and meets Melanie who caters a party he is attending. They have a whirlwind tour of NYC and the last night the condom breaks. Three months later he is being forced into an arranged marriage he is working at getting out of but has Melanie’s catering company come to cater the wedding that may or may not happen.
The third story is Zaid and Rebecca who 5 years before had a romance but their lives were to different and they parted. She comes to his country with a group of investors...consequences of their previous affair and ongoing feelings make for indecision and conflict.
All the stories were romantic, different and each faced different obstacles.
Sexy, romantic, suspenseful and strong men and women. The stories flow together but no overlap so you can listen in any order..just fun to have them together and watch the,prices fall together.
Worth a credit or $.

I always love this Leslie Noeth listens! She always knows exactly what we want to hear:) very sexy very awesome

This is an unbiased review with a credit from audiobookboom