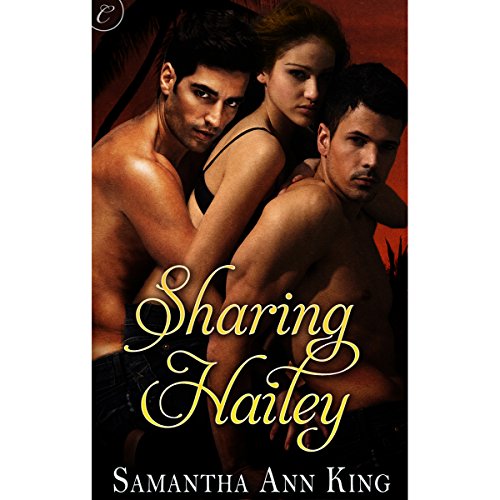 Hailey Anderson's deep, dark secret? She's been madly in lust with her overprotective brother's two best friends for years. Gorgeous woodworking artist Mark Allen and sexy doctor Tony Adamo have no idea they star in her fantasies every night.

After a nasty breakup with her abusive boyfriend, Hailey's looking for a little distance. Headed for a two-week Hawaiian vacation with her brother and his hot friends, Hailey can't wait to feast her eyes on Mark's and Tony's rock-hard, ocean-slick bodies. Even if she can't touch.

But instead of treating her like their little sister, Mark and Tony have a surprising proposition: a monogamous ménage à trois. The three of them - and no one else. Both men want Hailey and have agreed to share her. The red-hot reality is even better than the forbidden fantasy. Until Hailey's ex threatens their newfound happiness....

What listeners say about Sharing Hailey

Waste of a credit - disappointment

What disappointed you about Sharing Hailey?

Many missed opportunities in this story. Listened to lots of books in this genre, and this severely lacked character development. I struggled to finish the book and it was full of Hailey being weak, pathetic, and void of any qualities that would explain why these two men were apparently so enamoured with her.

The men were.. well, nothing ..no character, no development, just vague concepts of men (distinguishable from each other only by their professions - and giving a job title isn't the same as developing an understanding of a character and their personalities).

The sex isn't even that great. Considering it's a book about ménage, it all seemed boring and tame and didn't involve any emotional build up. You want to read (or listen to) a story and be rooting for them, as it's the journey of them getting there that's exciting after all. Alas, no. I was rooting for the book to finish so I could get to the next one in my library. I always try to finish a book to give it a chance to improve, but my optimism didn't pay off at all. In fact the book got steadily worse.

There's enough on paper when the plot line is sketched out that it should be full of excitement and drama and a blossoming relationship - but it severely missed the mark.

I want to finish a story feeling invested in the people, and falling a little in love with them all. This is a poor imitation of many books out there that achieve this with much more success.

What was most disappointing about Samantha Ann King’s story?

The complete lack of character development, and how unlikeable the female lead character was

What about Alexandra R. Josephs’s performance did you like?

She was fine. Wouldn't search her out, but wouldn't put me off. She sounded a bit pathetic at times, but that was more because of the story and not the narrator's fault.

What character would you cut from Sharing Hailey?

If only there was enough character development in there to be able to cut one out! If I had to choose, I'd cut the female main character, Hailey, as she's a weak unlikeable bore who is unlikely to attract he attention of two apparently amazing men.

So many books in this genre that are much much better. I'd recommend searching the internet for the best ménage books if you want a better one. This isn't worth a credit. Though this book somehow has a ridiculously high rating, but I can't for the life of me imagine why. Maybe it was the first "naughty" book they'd listened to and thought it was good, whereas they just liked the concept of ménage and not the story after all. Certainly a lesson in not trusting ratings!

This was a wonderful story, full of intrigue, romance and a blossoming 3 way relationship, oh and smoking hot sex.

A beautiful haunting love triangle but......

Firstly let me say, as the title of the book suggests 'Sharing' Hailey, this is an Adult Only book and, in my opinion, should have been put in the Erotica section.

Now, that said, I thought this was a touching love story about Hailey who loves 2 handsome sexy men Mark and Tony but she has known them all her life as they are her brother's best friends and she doesn't want to complicate things or lose their friendship. Then the lucky girl finds out that they are both interested in her too but the only problem is her ex boyfriend has other plans. There was lots of hot sex scenes but they were touching and romantic and well placed in the story.

Worth my credit? Absolutely Yes - but there's a big BUT - if you don't like the steamy sexy romance novels then this isn't for you.

You'd think by the cover and blurb that you'd be looking at something in the erotica category but honestly it could have been more raunchy.

More of a good romance with some really good intimate scenes, not even close to the dark side as it could have been. Definitely won't raise a decent blush while one is on public transport.

The title says it all!

This is an erotica romance about two men who want to "share" the object of their affection (Hailey). If you can suspend your disbelief that this scenario would ever really play out (if only it were true!) then you will enjoy this book. It has YUMMY sex scenes but very little substance. There is a plot, but it's weak. Actually, who really cares....it's a fun read. Just know what you are getting yourself into.

Would you listen to Sharing Hailey again? Why?

Would probably listen to it again. Although there is so much out there to listen to. I would look for another book by Samantha Ann King to listen to

What was one of the most memorable moments of Sharing Hailey?

Memorable moment when they each discovered the love for each other.

Which character – as performed by Alexandra R. Josephs – was your favorite?

I liked Hailey. She has experienced life at it's most devastating and still cares about others.

There were a lot of moving moments. I listened to this book almost without interruption.

What made the experience of listening to Sharing Hailey the most enjoyable?

the female had some common sense

Which character – as performed by Alexandra R. Josephs – was your favorite?

they were all performed well

one of my faves

I have read and re-read this book so many times that I pretty much have it memorized! It is one of my favorite MFM books! There are sexy scenes and suspenseful scenes that help balance everything out. I absolutely love everything about this book!

This is the first time reading it that I decided to listen to the audio version and it made me love the story even more. The narration was perfect!

Would you consider the audio edition of Sharing Hailey to be better than the print version?

The story takes off from the first page and keeps you going to the last page. Finished it in 1 Day.

After years of being close with two gorgeous friends that happen to be male, Hailey changes things around and enters a relationship with both of them. This comes on the heels of a disastrous break-up with Hailey’s ex-boyfriend who happens to be abusive. So Hailey has to deal with a new relationship with two men she has loved for years and a violent ex-lover who may destroy the new life she has yet to discover.

It’s much better in the last 3+ hours. The domestic abuse situation does get more intense. Mark and Tony have to go from making love to Hailey to desperately trying to protect her from Daniel. It seems like their new found relationship is doomed.

Based on the first half of the book I’d say don’t get it unless it’s on sale, but based on the last half I’d say it’s a good book worth your credit. This one is really hard for me to judge because of my conflicting views on this. So based on the entirety of the book I’d just give it an average rating.

I'm not sure what didn't work for me. But I know there's a problem when I fast forward through sex scenes. I love sex scenes. But I wearied of these very quickly. There are a plenty. And they were well done. No explicit language used, but the scenes were pretty detailed. In fact, it seemed like all the 3 main characters did was have sex. I think the author gave detail on one date that also turned into a sex scene and time in a hospital. But the story was too unbelievable for me throughout almost every part of the story. These characters had the most understanding people in the world. Little-to-no problem accepting a menage. Really?! What world are they living in. And two secure, masculine men have little-to-no problem sharing one woman. Really?! What world are they living in? And one woman has no favoritism between two men. She doesn't prefer one man's kiss over another, one man's touch over another, nothing. Everything is exactly the same for her and the two men; everything's great. Really?! Really?! And there wasn't a resolution revealed regarding a shooting episode or final housing arrangements. I can't say more without giving too much away. In fact, there were a few items left hanging in the story. Everything was just great. And having sex with no condom, among 3 people, with or without tests proving things are okay, seems insane to me in this day and age. Maybe I'm too cautious, but still... Really?! I require more plausibity even when I listen to paranormal romances. Geez! Overall, the author is good at writing sex scenes but little else.
The narrator was okay. I thought she did the male voices okay, though they all sounded pretty much the same. But the main female character, Hailey, was whiny and over-played at times. It was nauseating. Fast forward, please, quickly! So, try it if you dare. My first intuition was not to buy this book. I don't know why I changed my mind. So buyer beware. People say always go with your first mind. This time those people were proven right.

One of the best romance novels I've ever read, well narrated, great story, hot yet tasteful sex, I didnt cringe once! I'm going to have major book withdrawl on this one. Definitely a keeper.