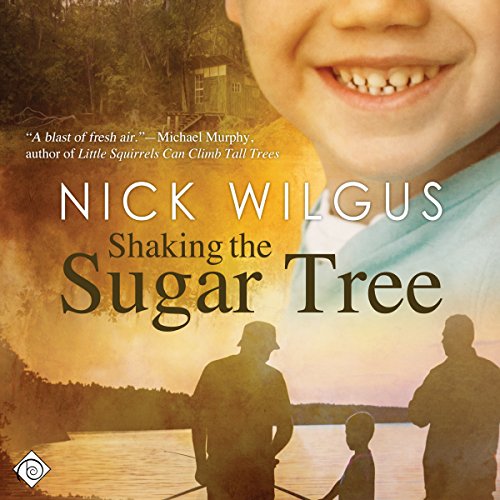 Wise-cracking Wiley Cantrell is loud and roaringly outrageous - and he needs to be to keep his deeply religious neighbors and family in the Deep South at bay. A failed writer on food stamps, Wiley works a minimum-wage job and barely manages to keep himself and his deaf son, Noah, more than a stone's throw away from Dumpster-diving.

Noah was a meth baby and has the birth defects to prove it. He sees how lonely his father is and tries to help him find a boyfriend while Wiley struggles to help Noah have a relationship with his incarcerated mother, who believes the best way to feed a child is with a slingshot.

Jackson falls like a wet mule wearing concrete boots for Wiley's sense of humor. And while Wiley represents much of the best of the South, Jackson is hiding a secret that could threaten this new family in the making.

When North meets South, the cultural misunderstandings are many, but so are the laughs, and the tears. But, as they say down in Dixie, it's all good.

The narrator didn't work for me... at ALL

This is why you have to be SO careful who narrates your audiobook! I could barely concentrate on the story, the audiobook was so bad.

1 star for the audiobook + 1 extra star for the benefit of the doubt. With all of these 5 star reviews, this book must be better than what I got from it, right?

This review will be mostly about how the audiobook didn't work for me. I can't/won't comment much on the story because I didn't get very far into it (33%, where I DNF-ed).

The MC in this book is supposed to be 33 with a thick, specific Southern accent. The narrator of this book sounds like a grandpa ---> mistake #1. I researched this narrator after I decided to DNF this one, and this narrator IS a grandpa. While some older men might be able to pull off a younger voice, this narrator, Wayne Messmer, can't. It sounds borderline nasty (in a bad way) when the narrator says some of his lines. It was a huge turn off.

Also, the accent that the narrator adopts for this role is very odd. It sounds almost like a parody of what the accent is supposed to be. It was distracting and uncomfortable. In addition, he doesn't do much vocal differentiation between the characters so the conversation was really hard to follow.

I also had a major problem with the cadence of the narrator. It sounded like he randomly interjected commas into each sentence. His pauses and line breaks were really weird and made the story sound unnatural and choppy.

Finally, the quality of the narration was off. There was a ton of static in the background, which was distracting and unprofessional sounding.

I have nothing but complaints. If I want to analyze the story itself, I think I'll have to buy the ebook.

**Copy provided by the publisher in exchange for an honest review**

DO NOT JUDGE THE BOOK BY THIS REVIEW!

Sadly, I had to DNF this audio book.

I cannot properly do it justice of reviewing it and I don’t think it’s a bad book. It’s just the narrator was really turning me off and I couldn’t make myself finish it.
I tried and tried.

First: The writing is excellent and the humor is plentiful. If you are looking for a book about being gay in the South I think you will probably like this book. However, the “romance” part of this book is not it’s strong suit – so if that is what you are looking for, I’d say: Keep looking. Wiley is a difficult character to like and I just never quite got there. Jackson seems awesome, and I didn’t ever see why (besides being the only gay guy around) he’d be interested in Wiley.

Two: I have the audio version of the book, and I just couldn’t listen to it anymore. The narration is done by a guy who has a great voice and he does a nice job with the dialect and the emotion, he’s funny and makes for a great character, but I couldn’t buy him as a romantic lead. He seemed way too old for the character and to me it felt like Grandpa telling about his romantic history, very off-putting. I just didn’t like it and could not get into it.

Three: Be warned, at one point Wiley and Jackson break up and Wiley is with someone else. It’s not cheating exactly, but it can put some people off. It’s part of his growth as a person, and as such is important to the story, but some people just hate that. So fair warning.

I’ll stand behind the idea that the book might be great, but as a review for the audio version I can’t recommend it.

YES! This story was so heart wrenching, Noah is by far my favorite character. He is always smiling, always willing to love...its beautiful. Wiley is adorable, his nervous sarcasm, his off hand jokes, the fact that he is who he is and does his best for his son, it really tugs the heart strings.

What does Wayne Messmer bring to the story that you wouldn’t experience if you just read the book?

emotion, his voice...he has just the right amount of sass for Wiley. Noah has a perfect amount of curiosity and even though he mostly signs his stuff, you get the feeling behind the words.

If you could take any character from Shaking the Sugar Tree out to dinner, who would it be and why?

NOAH! hes adorable, I just want to snuggle him up and watch Iron man with him over and over.

The book is told in the 1st person, and Wiley, our narrator, is 32...so why, oh why, did they get Wayne Messmer to read the book? Messmer sounds like a grandfather type, and comes across and bitter and angry at best. I've read some comments that people found the book funny in places...that never comes across with Messmer's reading. Having Carol Channing reading Hitler's Mein Kampf would make more sense. Messmer doesn't differentiate between voices, either, so conversations were sometimes confusing. The worst, though, were the romantic scenes. With Messmer's old man voice, they came across as creepy and disturbing. The story itself I enjoyed, although I hated the grandfather and wished someone would just shut him up. But again, that could have a lot to do with Messmer's reading.

the depth of character reality and maturity of story topic makes this a rare find. Add the amazing talent of the narrator and you will feel the heat of the Real South.