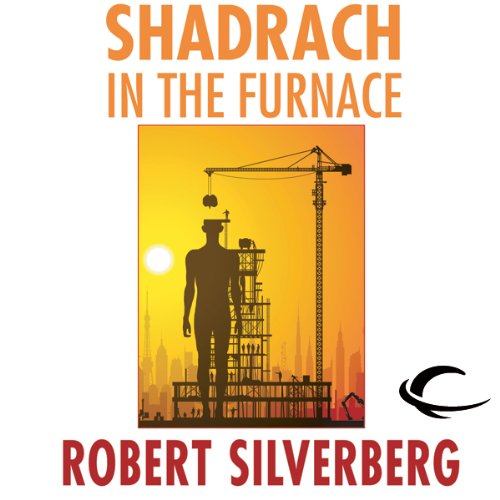 Shadrach in the Furnace

Shadrach in the Furnace

In the 21st century, a battered world is ruled by a crafty old tyrant, Genghis II Mao IV Khan. The Khan is 93 yers old, his life systems sustained by the skill of Mordecai Shadrach, a brilliant young surgeon whose chief function is to replace the Khan’s worn-out organs. Within the vast tower-complex, the most advanced equipment is dedicated to three top-priority projects, each designed to keep the Khan immortal. Most sinister of these is Project Avatar, by which the Khan’s mind and persona are to be transferred to a younger body.

Shadrach makes the unsettling discovery that it is his body that is to be used. His friends beg him to flee, but he refuses to panic. Instead, and with startling composure, he evolves a dangerous plan that could change the face of the earth or, if it backfires, mean the end of life.

Shadrach in the Furnace is at once a broad, sweeping novel and a harsh, abrasive, irreverent book about a life-and-death battle between two titans - one the epitome of evil, the other a paragon of idealism - in a society pushed to extremes.

If you could sum up Shadrach in the Furnace in three words, what would they be?

It’s the summer of 2012 and the Earth is a disaster. A deadly virus has killed most of the world population and those who remain will eventually succumb to its organ-rotting effects if they are not given an antidote before they start to show symptoms. All of the national governments have collapsed and the world is now ruled by the opportunistic dictator Genghis II Mao IV Khan with the help of the bureaucrats who do his bidding. All of them have been inoculated against the virus and, according to the Khan, they are working on increasing their supply of the antidote so it can be distributed to the people. Meanwhile, the Khan spends his day in his room, observing the dying people with the surveillance equipment that watches every part his domain.

One of the Khan’s most important advisors is his doctor, Mordecai Shadrach, a tall attractive black man whose implanted sensors constantly alert him of the Khan’s physical and emotional status. He loyally attends the Khan daily and regularly performs organ transplants and other surgeries that keep the elderly leader alive. All of this has worked fine so far, but what will happen when the Khan’s brain starts to deteriorate? There are signs of it already.

To prepare, the Khan has teams of scientists working on different projects that he hopes will ensure his survival. When Shadrach learns that one of these plans involves transferring the Khan’s consciousness into Shadrach’s body, he has a big decision to make. If he stays, he’ll lose himself. If he flees, he’ll be caught, tried as a traitor, and sent to one of the Khan’s organ farms. He is being watched very closely...

I’m always fascinated by Robert Silverberg’s novels, but I can’t say that I always like them. I did, however, thoroughly enjoy Shadrach in the Furnace. The dystopic “Big Brother” setting is intriguing, the plot is exciting and tense, there are numerous ethical issues to consider, and Shadrach is a likeable protagonist. Silverberg uses the story to discuss the history and possible future of the field of medicine. Especially interesting are the ideas about how we might preserve someone’s consciousness after the body deteriorates — a common theme in modern SF, but not so common in 1976 when this was written.

Silverberg takes the usual time-outs for sex scenes and extended drug trances, but these fit into the plot successfully (not always the case in Silverberg’s stories). For example, the hallucinogenic trips allow us to visit major historical and fictional world events and to see them from the perspective of people who lived in that time.

Similarly, Shadrach’s vacation (when he’s trying to discover whether he can flee) takes us to Jerusalem, Istanbul, and Rome where we see the evidences of a past glorious civilization alongside the new devastated — but still hopeful — life that people are now leading. Silverberg also uses this time to remind us of the slavery that the Jews and Blacks endured in Egypt and America and the pain that Jesus Christ suffered along the Via Dolorosa on his way to the cross.

There are other Biblical allusions. (There often are in Silverberg’s novels.) The title Shadrach in the Furnace refers, of course, to the Biblical story of Shadrach, Meshach and Abednego who were put into the furnace by King Nebuchadnezzar because they refused to worship him. When they didn’t burn up, Nebuchadnezzar acknowledged the power of the Hebrew God. Will Shadrach burn up when he refuses to bow to the Khan? Or will he walk the Via Dolorosa and become the savior of the world?

Shadrach in the Furnace was nominated for the Hugo and Nebula Awards. I listened to Audible Frontiers’ production which was narrated by Paul Boehmer who always gives a great performance. He never overacts or uses annoying accents and his enunciation is crystal clear. This was an excellent story for audio.

A future dystopian world, where Genghis II Mao IV is the the dictator of all. Shadrach Mordecai is the protagonist, he is the personal doctor for Genghis II Mao IV. The dictator is very old and death is approaching, while a scramble by scientist to lenghten his life ensues. Shadrach find himself perilously in the middle of it all.

The book was first published in 1976. The author Robert Silverberg set this future world in the year 2012, so you'll need to be able to over look that descrapncy. Honestly, the story is good enough that it is easy to forget.

Robert Silverberg's works place him as one of best science fiction writers, he rarely fails to entertain.

This is 2 or 3 of Silverberg's novels now that I've read/listened to and I think he's a very good writer. Though there is seemingly a lot of technology in this due to the medical jargon etc. it is not about the tech, but about individuality and what makes us human etc. Ultimately, thematically, this makes the best scifi because it lasts and though the dates need to be shifted into the future, the ideas themselves are not dated.

If you like science fiction, especially Silverberg, this doesn't disappoint. The scientific background is impeccable.

What other book might you compare Shadrach in the Furnace to and why?

It has a flavor of the world of Dune, though it's nothing like it. The blend of an imperial society with a live-giving drug (the vaccine for the organ rot) and the advanced science and enhancement of human capability is reminiscent of the themes in Dune. However, the handling is more inimate and less sweeping--it's all about Shadrach.

What does Paul Boehmer bring to the story that you wouldn’t experience if you just read the book?

The light voicing of different characters is handled masterfully. Nothing overdone. This makes the characters come alive.

The end, where Shadrach returns to Ulan Bator.

I liked this novel quite a bit--it's not one of Silverberg's top novels but it is amazingly written and though some people do not like the end--l did like it, although Genghis Mao seems to break character a bit.