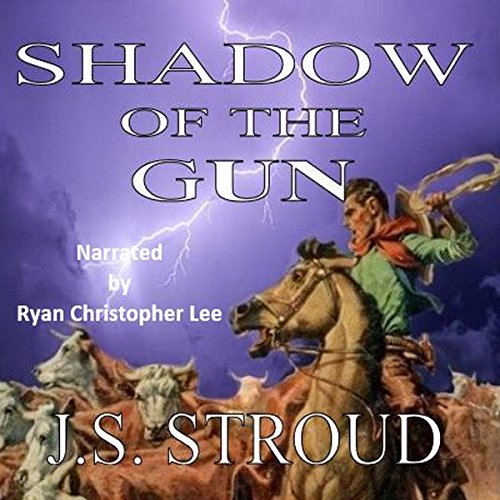 Shadow of the Gun

People said I was bobcat mean, but they had no idea what he was like. The old man was one of those people who could smile when he was facing you, then turn into an animal when your back was turned. I guess that was why Ma married him after Pa died. Not that she wanted to, it was just that she didn’t have much choice, not with pa gone and her stuck with a small kid and a broken down farm.

It was almost four years ago come November that Pa had started spitting up blood. It was just a few small spots at first, then they got bigger and he was coughing up a steady stream. Then one morning, he didn’t get out of bed. Not long after that, I was digging his grave.

What listeners say about Shadow of the Gun

I am always keeping my eye out for western authors that I have not read or that are new to the genre. I came across J. C. Stroud and noted that lately he has written a number of westerns. Stroud is a military veteran that has taken up writing.

This book is a bit different in that our young seventeen-year-old male hero is not on the vengeance trail hunting the people that killed his family. Stroud has K.C.’s mother dead of natural causes. His step-father loses the homestead in a card game. So K.C. sets off wandering from job to job as he develops into a man. I enjoyed his longest job working a cattle drive from Texas to Kansas.

The book is well written. Stroud wrote in a first-person narrative with limited dialogue. The author provided more description than most western writers except L’Amour. As a horse lover, I enjoyed the descriptions of the various horses he rode and his discussion of the various horse skills that are required on a trail drive. There is a lot of action and even some gun fights in the story. Overall, it is a good story for young people to read. There is no foul language or sex scenes just a good old-fashion story. I enjoyed this book enough that I am going to read another book by J.C. Stroud.

The book is just about six hours. Ryan Christopher Lee narrated the book. I have never listened to Lee narrate before. I do not know if the voice and style he used to narrate is his normal voice, but I was turned off by his style of narration. Maybe he was attempting to create a “western voice” but it fell flat. He mispronounced several of the Spanish words. It may be just my personal dislike for his narration so I am willing to try another book of his narration before I decide to avoid books he has narrated. Audible usually has such high-quality narrators that I was taken aback by this narration.