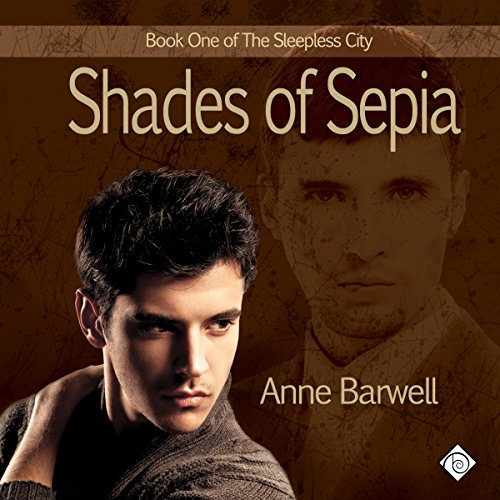 A serial killer stalks the streets of Flint, Ohio. The victims are always found in pairs, one human and one vampire.

Simon Hawthorne has been a vampire for nearly a hundred years, and he has never seen anything like it. Neither have the other supernaturals he works with to keep the streets safe for both their kind and the humans.

One meeting with Simon finds Ben Leyton falling for a man he knows is keeping secrets, but he can't ignore the growing attraction between them. A recent arrival in Flint, Ben finds it very different from his native New Zealand, but something about Simon makes Ben feel as though he's found a new home.

After a close friend falls victim to the killer, Simon is torn between revealing his true nature to Ben, and walking away to avoid the reaction he fears. But with the body count rising and the murders becoming more frequent, either, or both of them, could be the killer's next target.

What listeners say about Shades of Sepia

I really enjoyed the sweet vampire story. I found the characters engaging and the story a solid romance. I don't mind instalove within the trope of soulmates, but there were a few eye rolling moments. I think suspending belief is the best way to enjoy this story. The narrator give a A+ performance with his soft British accent for Simon. I was a little disappointed he didn't do a New Zealand accent for Ben, but it in no way took away from the story. I think you have to listen/read to book first in the series as it gives a lot of background and world building. Also, it introduces you to the cast of men who will appear in future books. I look forward to Book 2, Forge's story.

I really wanted to like this book. I wish someone had mentioned how amateurish and clichéd it happened to be so I wouldn't have wasted a credit on it. Even the narrator was off on this one. i could not finish it, and I really tried, hoping bad sentence after bad sentence that it would get better. It did not.

Fascinating beginning to a great series

Ben is a foreign student studying in America from New Zealand. He’s a photographer and he loves to spend hours out and about taking photos of everything and anything. One day he sees a man who catches his eye and after seeing him several times in a row decides to approach him.
Simon is a vampire, over a hundred years old, who sees Ben and identifies him as his potential soul mate. He doesn’t immediately try to approach Ben, but lets Ben come to him. Though Simon is lonely and happy for a chance at a life-companion, there is much in his past to suggest Ben might be better off without Simon.
Eventually, the two do meet and neither can stop their attraction from blossoming into a relationship and then love. Simon must come clean and confess what he is and Ben has to accept the monster that lives inside Simon.
In the meantime, Flint, their little town, is being subjected to a string of serial murders involving both humans and vampires. Together, Simon, Ben and three of Simon’s paranormal friends, work to solve the murders while keeping everyone they know as safe as possible.
It all culminates when someone from Simon’s past re-surfaces, trying to take Ben out of the picture.
Simon has to overcome his deadly addictions to save Ben and Ben has to trust that Simon is more than a victim of his desires.
**
This is a unique take on the vampire theme. There is a lot of the typical lore, but some parts are newly constructed. The soul-mate connection between Simon and Ben isn’t a foregone conclusion and there are some very good reasons why it shouldn’t happen at all.
I really liked the fact that the couple worked toward a relationship slowly and though some of the tension was immediately relieved by Simon’s confession, the bulk of the tension held through the end, and even remained (to a certain extent) past the ending. Unlike a lot of paranormal/vampire stories, mortality isn’t all it’s cracked up to be, and though my romantic heart would hope the two bond to one another for eternity, it may not happen and there is good reasoning behind that.
The sensual scenes were good, and they got better as the couple got to know one another, and the romance was sweet and tender.
I enjoyed the writing style very much and thought it was a refreshing.
I give the story itself a 4.5 of 5 stars.

Narration: Michael Ferralulo is a new narrator to me (at this time), but I thought he did a good job. He tried to alter the voices so that each sounded unique and I could easily differentiate who was speaking based on his voice modulation alone. One big complaint I had was Ben. Ben was from New Zealand, used New Zealand vernacular, and was only studying in America a short time but Michael gave him a flat American accent. Simon is British and has a lovely British accent. It would have felt more authentic if Ben had an accent.
Overall, he did a solid job and I would listen to another narration by him in the future.
I give this narration a 3 of 5 stars.

4 stars – I really liked it

This is a vampire story that manages not to belabor those old stereotypes even if it doesn't outright avoid them, so it makes for a decent read. The characters are sympathetic and likeable for the most part, though the secondary characters don't get much attention or fleshing out. The villain is also a bit one dimensional, and is never actually a mystery; I would have liked some more build up and tension in that area. More who-dunnit, with clearer (and less clichéd) motives. It seems like there is room for a follow up novel, though I haven't found one, but for the most part, all the immediate loose ends get wrapped up.

This story does suffer from the anti-xx syndrome that many m-m stories get caught in. I'm finding the more of this genre I read, the more I notice and am bothered by this. Of the 3 female characters, one is dead, one is relegated to a long distance relationship over skype, and the other is obnoxious (and extremely minor). I know our main characters don't fall in love with women, but surely, one of these dudes hangs out with women....occasionally? Or has female friends whom they value, or marginally appreciate? There's really no female of significance in any of their lives that they actually interact with in person? Ever?

The narrator is solid on emoting, a little shaky on accents. 3 star narration based solely on the accents. Otherwise, I'd give him 4. His English accent is passable...mostly. He doesn't even attempt the main character's New Zealand accent, which is both good and bad. If you can't do a Kiwi accent, absolutely DO NOT ATTEMPT IT. It will just be agony, particularly if the speaker has a lot of dialogue. So good job for knowing your limits. On the other hand, the publisher/author couldn't find anyone who could do the accent? Not anyone? This is a main character we're talking about.

So over all, solid and enjoyable, though not a favorite. I'd relisten at a later date, and be willing to take a chance on a second book in the series if one ever showed up.