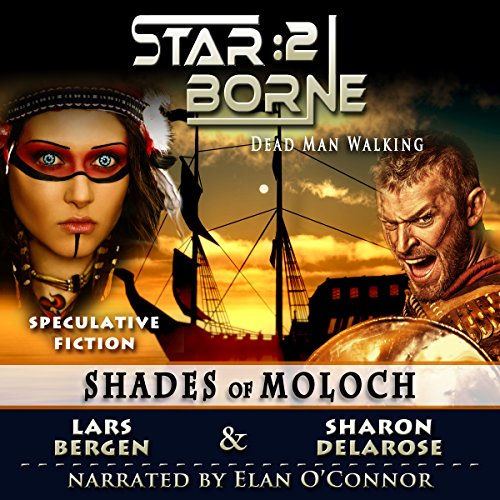 By: Lars Bergen,Sharon Delarose
Narrated by: Elan O'Connor
Try for £0.00

A kidnapping ignites an intergalactic war, as the demon-child comes of age on Earth. Is he the spawn of the evil god Moloch? When the demon-child teams up with a Molocha sorceress and a powerful druid to journey into the Land of Shadows, nobody knows whether the trio will save the kidnapped Brigit, or sacrifice her.

Brigit's fate heats up when she is thrown into a dungeon with a dead man walking. The Fomorian giant was resurrected from the dead, but what came back seems almost inhuman. Even his wife is terrified that her now-deranged husband is just a shell for Moloch in the flesh.

While shades of Moloch send their icy fingers across Earth, an Algolian warbird approaches Earth from space. The Algolian Admiral Skagg has his finger on the trigger, eager to blast Earth into oblivion. Meanwhile, the Argosy starship Shrike desperately searches for Earth - a planet they know only by name, but not location.

War rages, while star-crossed lovers give in to death as they watch the destruction of the Isle of Destiny, ablaze in a pillar of fire.

What listeners say about Shades of Moloch