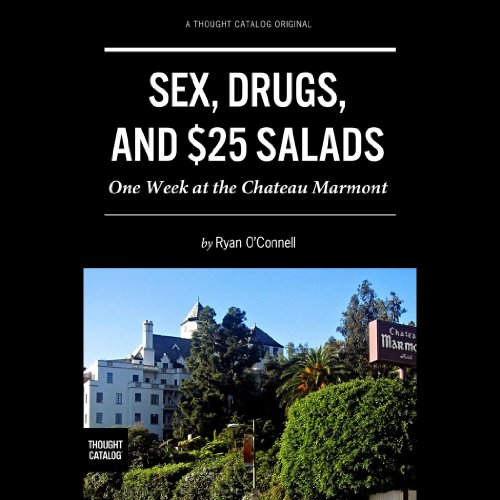 One Week at the Chateau Marmont
By: Ryan O'Connell
Narrated by: Pat Young
Length: 54 mins
Categories: Biographies & Memoirs, Memoirs
5 out of 5 stars 5.0 (1 rating)

When Ryan O'Connell went to stay for a week at the glamorous Chateau Marmont hotel last summer, he didn't quite know what to expect. Would he become instant BFF's with Lindsay Lohan and do lines of coke off of John Belushi's ghost? Would he have vacuous sex in the hotel elevator with Benicio Del Toro, just like Scarlett Johansson once did during an Oscars after-party? Or would he just be really, really bored like Stephen Dorff and Elle Fanning were in the movie, Somewhere?

The answer, it turned out, was none of the above. After spending seven days running around the hotel looking for drugs, sex, and expensive salads, Ryan realized just how bizarre the Chateau Marmont actually was. And after capturing what he saw there, he can pretty much guarantee that he'll never be allowed back in again. Chic.

I've stayed at this classic hotel and had no problems, sat in the courtyard, but I was respectful. The author wonders why he was treated poorly and not seated in the Courtyard. I would never have expected unknown hotel staff to get me drugs or send up a prostitute in the form of a masseuse. The author's crass behavior to the staff is a bit embarrassing to listen to, but if you want to hear an account from the hotel guest from Hell, this is your story. This is a lame attempt to lambast a classic hotel that prides itself on discretion. The author is exactly the kind of creep he calls all the other guests. If this is meant as a joke on the hotel - which saw right through him, then the joke is on him. The book should be called "Diary of an Entitled Traveling Nobody Wannabe. I admit the writing style is good and the flow is interesting, and the reader is fine. Just know that he gets no sex nor drugs and but I guess he had a salad. Granted, many rooms in the hotel are a bit run down. That is part of the strange charm. The place is history.

Not worth the paper it's printed on.

What would have made Sex, Drugs, and $25 Salads better?

A story would have been a good start.

Has Sex, Drugs, and $25 Salads turned you off from other books in this genre?

Genre? Is there a genre of whiny personal journal highlighting the writer's expectations and personal shortcomings?

Who would you have cast as narrator instead of Pat Young?

I feel sorry for the narrator. The author was probably too embarrassed to read his own work for the audio.

Boredom. You can her more entertaining stories listening to other's conversations at a Starbucks.

Save your money. If you must know what the Chateau is like, go and see for yourself. Or do something else you love. Live the life, don't listen to the book.