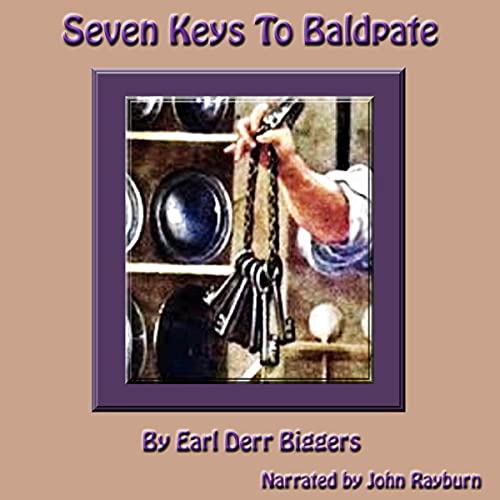 By: Earl Derr Biggers
Narrated by: John Rayburn
Try for £0.00

Seven keys. Seven doors. Seven people desiring solitude in a deserted hotel high on a mountainside. Those are prime ingredients for a story packed with mystery, excitement, and action. Add a side dish of humor and the listening recipe is complete.

Seven Keys to Baldpate was such an intriguing tale it brought on an effort to build an actual counterpart of Baldpate. The site selected was about five miles south of Estes Park, Colorado, opposite Lily Lake on Highway 7. It turned out to be a fascinating getaway location; vacationers were not only intrigued by the concept, but many actually made extensive contributions of various keys to match the mood. This erased the story’s description of the “Seven Keys”, and the inn’s collection of keys reached an astounding total of 20-30,000 of them. The exceptional collection was comprised of far more than just ordinary keys brought on a whim. One was an actual key to a desk drawer belonging to Nazi leader Adolf Hitler in the bunker where he eventually committed suicide. There was one from Mozart’s wine cellar, and from the likes of Westminster Abby, the Pentagon, and the Frankenstein Castle in Muhltal, Germany, said to be a possible inspiration for Mary Shelley’s fictional 1818 Gothic novel Frankenstein.

This all stemmed from when novelist Billy Magee bet a wealthy friend he could write a 10,000-word story within 24 hours. For privacy, he went to a summer resort named Baldpate Inn in Western Nebraska. He locked himself in, thinking he had the only key. Some peculiar people showed up, and Magee thought it was an effort to make him lose his bet. Instead, there were actual killings and bodies disappeared and reappeared. The gruesome happenings led to the completion of this intriguing novel that you can now hear.

What listeners say about Seven Keys to Baldpate