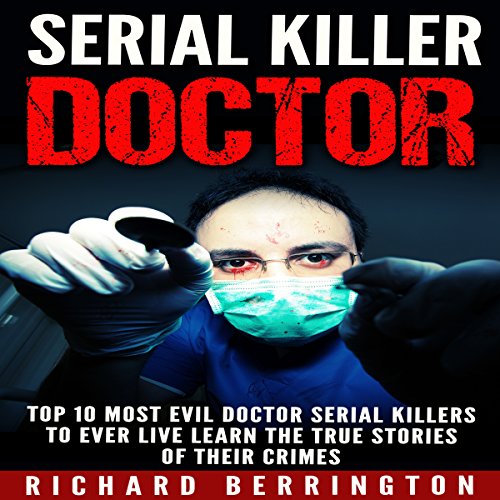 By: Richard Berrington
Narrated by: Persephone Rose
Try for £0.00

Learn about the most evil doctors to have ever lived.

The term "serial killer" was officially first used in a 1950 book titled The Complete Detective. Since then, it has been chiefly used to refer an individual who murders people for a form of psychological satisfaction. While there seems to be a consensus on the psychological ingredient of serial killing, there remains a dispute regarding the number of victims of a supposed serial killer. Whereas the FBI puts it as "series of two or more murders...," psychologists and other related professionals define a serial killer "as a person who murders three or more people." Despite this apparent disparity in the definitions of a serial killer, one thing is certain: they largely murder people at unprecedented rate. This article gives an insight into the lives of 10 of the most evil serial killers to ever live.

Would you try another book from Richard Berrington and/or Persephone Rose?

What could Richard Berrington have done to make this a more enjoyable book for you?

Um, pretty much everything.

If it had been a real person that would've made the performance much better.

This "book" is ridiculously bad. The writing is so poor that it's breathtaking and the reader is a computer program. It doesn't sound like it from the sample but it is. You'll notice the mispronunciations of words.

Much of the writing itself makes no sense whatsoever. Example of the quality of the writing: "Her deadly spree was all the all the more stunning on the grounds that she would become friends with the folks of her casualties who endowed their kids into her gives it a second thought." (Talking about an infamous Angel of Death who prayed on kids in England.) What does that even mean?