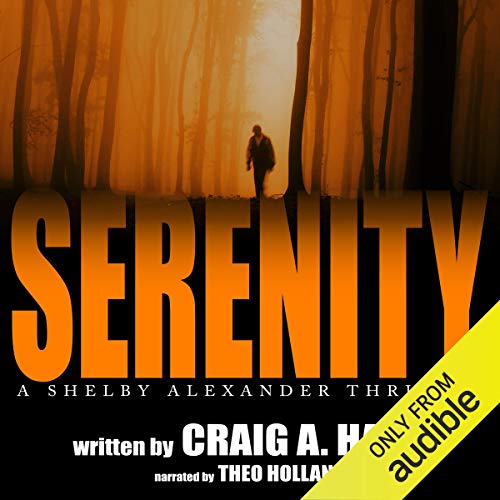 By: Craig A. Hart
Narrated by: Theo Holland

A woman dies in his arms...a drug dealer offers him $10,000...a gunman is determined to kill him. And then everything went to hell.

Shelby Alexander is an aging ex-boxer and retired fixer whose activities often flirted with the wrong side of the law. Looking for a little peace and a slower pace of life, he moved to Serenity, the small Michigan town where he grew up. But trouble follows men like Shelby, and he finds himself embroiled in an underworld of drugs and violence that may prove to be his undoing.

It seemed so simple: 10 grand to ask a few questions. He should have known money complicates everything, especially when the infamous Ellis family is involved, and when a small army of downstate dealers and a shadowy gunman all turn their sights on him, Shelby decides things have gone far enough. And he won't let the law stand in his way.

The first book in the new Shelby Alexander Thriller series, Serenity is an action-packed audiobook with a lovingly rendered cast, witty dialogue, and a main character who doesn't know when to quit.

Not very serene in Serenity...

When the intellectually challenged sister of the local meth dealer dies in Shelby Alexander's arms after freezing almost to death in his yard her brother shows up at his door. Seems the brother wants Alexander to investigate why she was there. She was working for him as a drug courier and wasn't supposed to be any where near Alexander's home. Next thing you know the brother is murdered as well.
This story takes some very strange turns and when the mastermind behind these two and more deaths is revealed it is a bit of a surprise.
The setting is a small town in Michigan but some of the scenes seem right out of the novel Deliverance.
I would definitely recommend getting this book for the discounted kindle unlimited price, but because of the short length I don't think it would be worth a credit.
Theo Holland does a good job narrating.
If you found this review helpful please indicate so.
Thank You.

Shelby Alexander is a 60 year old divorced ex-boxer who recently moved back to his hometown of Serenity in northern Michigan hoping for a peaceful and slower life. He strikes up a sexual relationship with a bar tender half his age. Serenity is now controlled by a murderous family that is selling illegal drugs. He finds a local woman near death with a head wound and nearly frozen in the outdoors. Despite his efforts she dies. The woman has severe autism and is a member of the underworld family. Alexander is offered $10k to find the killer. Lots of violence and death follow.

Serenity is an excellent suspense mystery which is also well narrated. My issue with the Shelby Alexander Thriller series is that all of the books are 4 hour novellas which are over priced as full novels. The books are priced at more than I pay for a credit using my Audible Platinum Annual Plan. They cost less using Kindle Unlimited but are still over priced.

A good little mystery, action-packed and with enough surprises to keep me on edge.
The main character, Shelby Alexander, is suitably flawed and no longer entirely young but is an interesting guy who is likable and by no means a superman who handles everything perfectly. He is divorced with a 30-year old daughter who he was estranged from as a result from of a somewhat messy divorce from her mother. The relationship with the daughter is still not perfect, but it is getting better. He has a girlfriend who is 30 years his junior, that too causes complications. Not easy for a 60-year old former boxer with arthritis and other issues.
But all in all, it made for a good story and I'm fairly certain I will be picking up the next volume in this series.

Serenity is my kind of book: short, brisk, and just a flat-out enjoyable read. Shelby Alexander is an ex-cop (amongst other things) who has retired to the small town of Serenity, Michigan. It doesn’t take long for trouble to rear its ugly head, and Shelby finds himself knee-deep in criminals, corrupt lawman, and murder. The story moves at a quick pace and doesn’t bog itself down in unnecessary detail or backstory. If I have one small criticism, it’s that Shelby’s girlfriend didn’t seem to add anything to the story, but there’s a good chance she’ll have a larger role in the books to come. A solid 4 stars!

Narration elevates this decent intro to a series

This is my first experience with author Craig Hart & narrator Theo Holland. This is a really short book. If it's not novella-length, it's definitely just over the word count. That's OK, I just think the length may have impacted feeling like the story was a little rushed and could be developed better. It wasn't awful, I just wasn't "wowed" by it.

Shelby Alexander is a divorcee, retired boxer, and ... well, I don't quite know. He doesn't really have any background in the story to support it, but he gets "hired" by the local meth dealer to investigate who murdered his sister. He becomes embroiled in a turf war between drug manufacturers, puts up with local and biased law enforcement, tolerates his whiny daughter, and has frequent sex with his much younger girlfriend. Once I got past the "why this guy?", I pretty much enjoyed it. Though, I think the story was significantly elevated by the narration.

Theo Holland was an excellent choice for this book. He sounds like how I imagine a 50+ former bad boy but trying to just get some peace and quiet man should sound. He gave all the characters unique voices and his accents were nice without being comical. I'm definitely looking forward to hearing more from him.

While I give this one a 3, I'm definitely invested in the world that Hart has built and am ready for Serenity Stalked.

I received a free copy of this audiobook and am voluntarily leaving a review.

I enjoyed this story. It is a short crime story with an older leading character and plenty of side characters all sticking their noses where they don’t belong. A great start to a series and I would definitely listen to more. I liked the narration as well. I would recommend this story.

Excellent start to a new series!

I loved this listen!!!

As the first book in a series, this book knocked it out of the park!!

The narrator was something special as well. This is my first Holland book and he is a bonafide narrator. Shelby had some quirk and the situations were oft intense. Holland performed them excellently.

New author to us and a good book.

This was a very fun book. Characters were typical old men. Humor was very good and the plot was tight, fast and not a typical read. Will get his next book.

A suspenseful and entertaining thriller...

I found this story to be exciting and suspenseful from beginning to end. Shelby Alexander is a retired boxer who has also done some work as a “fixer” but is now looking forward to settling down to a nice, calm retirement in his hometown of Serenity. As it turns out, Serenity is anything but serene and Shelby soon finds himself in the middle of a drug war. Shelby accepts money from a local drug dealer to find out the details surrounding the death of a member of the drug dealer’s family who happened to die on Shelby’s property. This is not an employment opportunity I would have accepted but I do not have his background or skill set. The story then proceeds to take the reader on an action-packed adventure ride with twists and turns enough to keep you hooked until the very end of the story. The narrator did a wonderful job setting the pace of the story and differentiating the various characters. This is a novella-length story which can be read/listened to in one sitting if so desired. There is violence but it is not overly graphic. There is coarse language (but that is not unreasonable given some of the situations the characters find themselves in). Overall, this was a very entertaining story that inspires me to continue with series.

While I did purchase a copy of this book, the author gifted me with an audible code for the audio version and the above is my honest and unbiased review.

Serenity by Craig A. Hart is an enjoyable enough read. Unofficial private eye looking into the murder of a woman with Down's Syndrome. Her body was located on his property and he gets tangled with the local drug trafficking gangs as he looks to solve the mystery.

As mentioned the book was okay. It is a short enough read that I did not spend too much time with it, but as always Theo Holland's narration adds positivity to the experience. Theo is a wonderful, easy to listen to narrator, and he is one who does good distinct character voices without going over the top. Additionally, a challenge for other male narrators, Mr. Holland is able to do women in a way that does not distract the listener; some narrators make female characters sound like cartoons.

Finally, and something that would not be otherwise noticed is Theo Holland's ability to keep the tone of the story where the author intended. In a scene where there is some immediate danger the protagonists begin "checking out" a woman who pulls up near by and gets out of her vehicle. I do not believe it was written to be funny, and instead is otherwise ridiculous that a long conversation about this woman would be taking place amid the danger that they, and she are in. Theo's narration keeps the tension of the scene that was intended by the author, but not sustained by the author's own pacing.

All in all, if you are looking for an enjoyable short escape into a thriller novel, Serenity does provide that escape. My advice is to choose the audio version for a better experience.