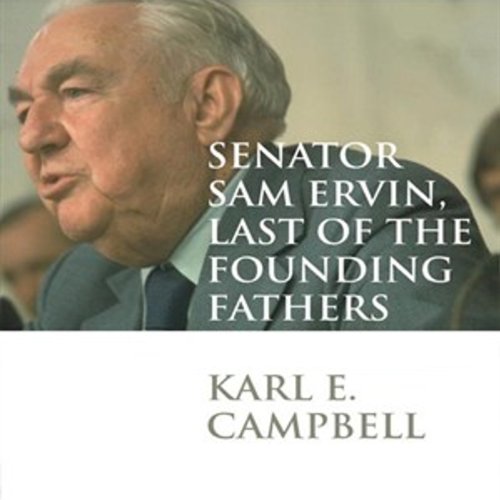 By: Karl E. Campbell
Narrated by: David Stampone
Try for £0.00

Many Americans remember Senator Sam Ervin (1896-1985) as the affable, Bible-quoting, old country lawyer who chaired the Senate Watergate hearings in 1973. Ervin's stories from down home in North Carolina, his reciting literary passages ranging from Shakespeare to Aesop's fables, and his earnest lectures in defense of civil liberties and constitutional government contributed to the downfall of President Nixon and earned Senator Ervin a reputation as "the last of the founding fathers.

"Yet for most of his twenty years in the Senate, Ervin applied these same rhetorical devices to a very different purpose. Between 1954 and 1974, he was Jim Crow's most talented legal defender as the South's constitutional expert during the congressional debates on civil rights. The paradox of the senator's opposition to civil rights and defense of civil liberties lies at the heart of this biography of Sam Ervin.Drawing on newly opened archival material, Karl Campbell illuminates the character of the man and the historical forces that shaped him.

The senator's distrust of centralized power, Campbell argues, helps explain his ironic reputation as a foe of civil rights and a champion of civil liberties. Campbell demonstrates that the Watergate scandal represented the culmination of an escalating series of clashes between the imperial presidency of Richard Nixon and a congressional counterattack led by Senator Ervin. The issue central to that struggle, as well as to many of the other crusades in Ervin's life, remains a key question of the American experience today how to exercise legitimate government power while protecting essential individual freedoms.

What listeners say about Senator Sam Ervin, Last of the Founding Fathers

I was looking forward to learning more about one of the great senators from my state of North Carolina, Sam Ervin. While I did learn more than when I started, the book focused too much on the apparent contradiction between opposing civil rights and defending civil liberties. This narrow focus almost presented a false dichotomy in Ervin's constitutional and cultural perspective.

What really bothered me about this book was its narrator. He seemed to have no interest in the subject of the book and he mumbled a great deal. I will not listen to this narrator again unless he took voice lessons from Bob Souer or Peter Francis James.