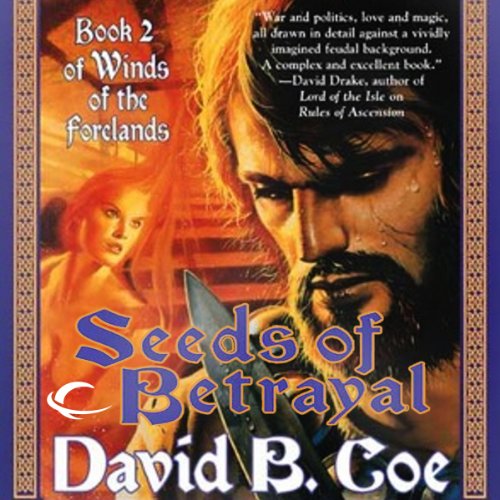 By: David B. Coe
Narrated by: Alpha Trivette

The realms of the Forelands are in turmoil as a result of the machinations of a powerful conspiracy of sorcerers, members of a race called the Qirsi, pale-skinned folk feared by those in power. Though many refuse to acknowledge the possibility of a conspiracy, a handful of Qirsi and nobles realize that the time has come to take action, even at the cost of their loves, their honor, and even their lives.

The rebels don't know of each other's actions, however, and the tenuous threads holding the realms together are starting to unravel. With the death of a king, nobles gather to choose a new leader, and deadly power springs from a most unexpected source. As new alliances form, former enemies become unlikely partners.

But who can be trusted in these new alliances, and who will be swayed by love, jealousy, or pride to betray their new allies? For more than the future of the realm is at stake. The future of the entire Forelands is in danger, and a 900-year-old grudge may lead to civil war. Those who wish to prevent it must place their hopes in a reluctant assassin, a few Qirsi and nobles, and the one man who may be able to defeat the leader of the conspiracy...if he can survive long enough to do it.

What listeners say about Seeds of Betrayal

A real let down

The story was a let down and there was hardly any plot movement. There was a lot a of political intrigue, but it wasn't very well done. The currency system leaves a lot to be desired and is nonsensical at times.

Has Seeds of Betrayal put you off other books in this genre?

The narrator did a very good job, but was let down by the story.

If you could play editor, what scene or scenes would you have cut from Seeds of Betrayal?

I would have focused less on the political intrigues.

The magic system and the currency system in this book are not well developed. I was looking forward to seeing more of Lord Tavis, but his story hardly progressed. The author is at least two or three leagues below George RR Martin or Brandon Sanderson. Suffice to say that I wont be completing the series.

From the start of book 1, I've been lost (good way) in this world. Headed for #3 now