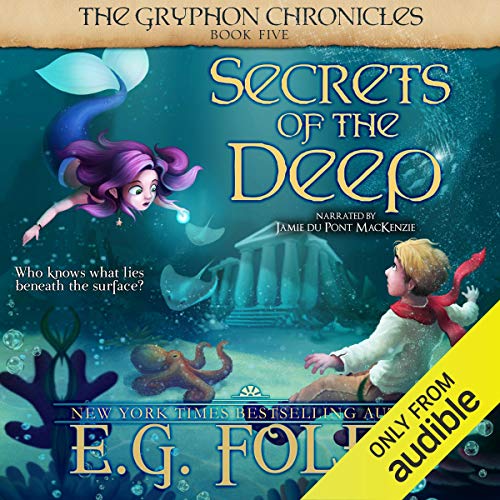 Secrets of the Deep

Secrets of the Deep

Some lost treasures were never meant to be found...

With the Dark Druids after him and a magical war brewing, 13-year-old Jake Everton must lie low for a while, so his Elder witch aunt takes him and the gang on a long beach holiday, out of harm's way. But sure enough, Jake plunges into trouble once again when he meets a feisty royal mermaid on the run.

Princess Sapphira, daughter of King Nereus, recently ventured into the deep and stumbled upon a powerful artifact from ancient Atlantis. But the mysterious orb holds deadlier secrets than she ever suspected, and now every power-mad tyrant in the Seven Seas wants it - especially the dread, undead pirate king, Captain Davy Jones. When the legendary Lord of the Locker invades her father's kingdom and takes her little sister hostage, demanding the orb in exchange, Sapphira blames herself for the catastrophe and means to hand it over. But Jake finds out that if Jones gets the orb, he'll use its power to drown the world in a second Noah's Flood!

Now it's up to the aspiring young Lightrider and his friends to help the mermaid rescue her little sister and save the world from the same watery doom that drowned Atlantis - if Jake and the headstrong princess don't strangle each other first!

Thumbs up from my 8 year old

I think it’s a good book it because it’s got a really good twist at the end.

With a war on the horizon and the dark druids more intent than ever to get to Jake, he and his friends are sent to his Aunt's "out of the way" house! They are eager to have a nice quiet holiday, but as usual, trouble seems to find them! This time in the form of a royal mermaid, Princess Sapphira, daughter of King Nereus. She found a rare and powerful artifact that came from Atlantis and accidentally activated it. She quickly shut it off but not before the powerful magic was felt by some nefarious water folk. Word made it's way to Davy Jones and he wants the artifact badly!! So badly that he invades her fathers kingdom and takes her little sister hostage. But Sapphira hides the thing and goes in search of her sister.

Meanwhile, while testing out Archie's sub, Jake stumbles across, not only the artifact but the Princess too. When he finds out that Davy Jones intends to use it to flood the world to enlarge his domain, Jake and his friends find themselves fighting shark headed men, Davy Jones and the Dark Druids! Will this be the end of the gang??

This series is one that should be way more popular than it is. It is chocked full of amazing characters, action, adventure and fantastical world building and creatures, to keep everyone wanting more. I fell in love with the world and characters way back when I read the first and here we are at number 5 and the story is still as fresh and energetic as ever.

The characters are among my favourites as I find them to be "real". By that I mean that they act and behave exactly as they should. They are young people and behave like young people, they are just drawn into the trouble no matter where they go. They are extremely well written and developed and I loved each of them, even Davy Jones!!

The plot was amazingly entertaining and engaging! Being book 5, I thought we may have some things rehashed in the plot, but no, as I said before, it's as fresh and entertaining as always. These authors know how to write!!!

In all, this is one of my favourite series, it's right up there with Harry Potter!!! This is a massive book too, at over 18hrs, but it felt so short. I devoured it and didn't want it to end. More please ;) Lol.

Jamie du Pont MacKenzie was just as good as I remembered (it was a while ago that I listened to book 4). He really is a fantastic narrator and I'm surprised he hasn't narrated more books. He brought every single character to life, gave them their own unique tone and voice and made the story so much more enjoyable. Highly highly recommend!

Want a great listen for whole family. I highly recommend. Another great adventure for Jake and his friends. Can't wait for the last book of the series.

Excellent! It's been a while since I read the previous Gryphon Chronicles, so I was very happy to get this one! Lots of action, painless history, fun, and more! The publisher's blurb gives hints and there is no need for spoilers, but that can't begin to prepare you for all the laughs and excitement!
I got the audio, and my only caveat is that I wish that it had been divided into two parts. Facing 19 hours required a bit of planning to fit it into life.
The narrator does a fantastic job of differentiating characters and bringing them to life!

Really great series I would recommend it for anyone can't wait for the last book to come out!

I loved it the guy was good I love dani and ...uhhhh it was really good

Suggested by an HP fan - love it!

I was looking for something whimsical, adventurous, and downright magical. As an HP fan, I asked around to find what other HP fans have been reading and a girl told me to check out The Gryphon Chronicles. They aren't directly comparable, which I prefer, but the storyline and characters kept me coming back for more. I love Jake and his entire crew - I also like that the authors did not confine themselves to any one mythology. Anything goes! I think it sets these books apart. I am also sort of picky regarding the voice performance for my audiobooks but I can honestly say that Jamie du Pont MacKenzie ranks up there, for me, with Jim Dale.

I loved it the story is fantastic! It is both funny and mysterious I give it a full on five stars for everything amazing truly amazing! You must get this audiobook

great for young adult readers suggest for all stor

it was a good story and kept you guessing but I've been so you was understandable where it was going. It was great for an adult readers and suggested for all

It starts very slowly but it builds fast and the story was just ok and I might listen to this one again but don’t know but I am waiting on the last one.

I loved the characters, both the adults and children. Each drawn with such vivid descriptions I had become attached. I am waiting for MORE in this series to take me away from the daily grind of my life. Thank you.