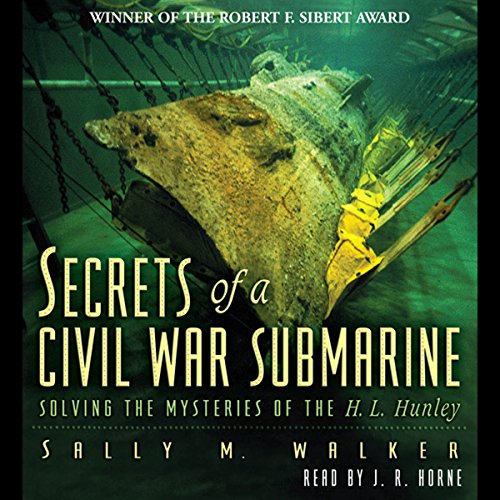 Secrets of a Civil War Submarine

Secrets of a Civil War Submarine

For more than 100 years, a submarine lay buried beneath the ocean floor near Charleston, South Carolina. This Civil War stealth weapon, the H.L. Hunley, made history in 1864 as the first submarine ever to sink an enemy ship. But something went wrong during that daring mission. The Hunley never returned to port.

Despite decades of searching, the Hunley remained unfound. In 1995 her story took a startling turn. As she had during the Civil War, the Hunley once again made newspaper headlines. How the submarine came to be on the ocean floor, how she came to leave it, and what happened next make up one of the most compelling stories in the history of both archaeology and the Civil War - an amazing tale of bravery, mystery, bones, and gold.

"Walker brings a little-known story of the Civil War to life in this fascinating book." ( School Library Journal)
"The book will serve as an informative guide to anyone interested in the Hunley or intrigued by archaeology." ( Booklist)

What listeners say about Secrets of a Civil War Submarine

Fascinating review of the mystery of the Hunley

This book kept me hooked until the final chapter. So much mystery, so many clues to find and so much hard work to restore this submarine. Well read.

Good intro to the early days of the research

This book was written only a few years after the sub was raised, so it’s not the latest book to read. Written for readers in secondary school, it is a very good intro to the history, science and archeology around the sub and what is being done with it. Worth a listen.

Great review of the Story and the people involved.

Great review of the Huntley recovery and the Artifacts found inside. Narration was good and other than the weird music was well done