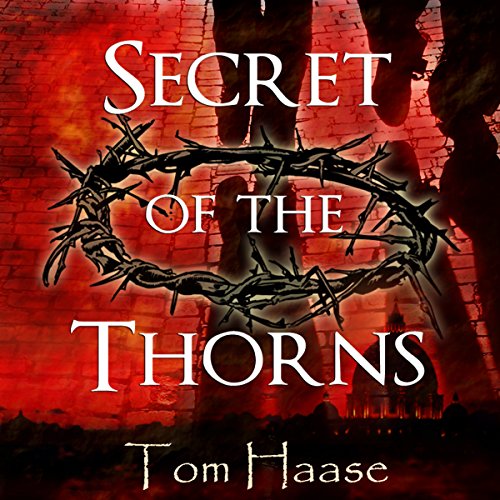 Secret of the Thorns

Secret of the Thorns

We know what happened to the robe of Christ.

We think we know what happened to his cross.

What really happened to the Crown of Thorns?

"Secret of The Thorns is must read thriller - a winner!" (Lois Lavrisa, bestselling author of Liquid Lies)
"A true storyteller in every sense of the phrase." (Sean Adams, author of Coin of Indecision)

Less sentences like: "Sweat ran down her face and fell between her ample breasts."

Would you ever listen to anything by Tom Haase again?

I'd give him another try.

Would you be willing to try another one of John M. Perry’s performances?

I don't know why but his voice sounds computer generated.

Didn't get passed the third chapter, so I don't know.

I would have persevered with this story but the computerised sounding voice was difficult to listen to.

Yes, it's a thrilling read from start to finish.

What was one of the most memorable moments of Secret of the Thorns?

A cross buried in St Augustine FL is the solitary clue that unraveled the mystery.


What does John M. Perry bring to the story that you wouldn’t experience if you just read the book?

A readers Voice is very important when listening to a book. I enjoy Perry's inflection and tone.

Truth or Fiction - could this really be What happened to the Crown of Thorns?

Enjoyable to listen to.

If you could sum up Secret of the Thorns in three words, what would they be?

This book has great unpredictable turns and twists. It is enjoyable to listen to.

What does John M. Perry bring to the story that you wouldn’t experience if you just read the book?

The reader, John Perry, has a great range of different voices to fit different personalities.

The discovery of the empty church cavern in Spain. Never expected that..

Looking forward to book two being available on audible.

For fans of Dan Brown

This was an interesting book that would be great for fans of Dan Brown. I liked the blending of history, religion, mystery, and action. It was a little hard for me to stay focused during parts of it, but it was still very enjoyable. I listened to the Audible audio version narrated by John M. Perry. I was thrown off by some of his pronunciations of some words, but I can't recall any of them now. He also sounded slightly robotic somehow. I liked that he didn't use the high-pitched, frantic voice for his female characters, which seems to be so common for many male narrators doing female characters. Overall, an enjoyable book and I look forward to seeing what happens in the next book of the series.

Would you try another book from Tom Haase and/or John M. Perry?

I don't know if the narrator just made the storry bad but i had to stop i couldn't listen anymore. The story may very well be good but i just could't take it anymore.

Would you ever listen to anything by Tom Haase again?

I may give it another go.

Would you be willing to try another one of John M. Perry’s performances?

Maybe and thats a big maybe

No, the narration sounds computer generated.

Would you be willing to try another book from Tom Haase? Why or why not?

Yes, if the narrator was different.

What didn’t you like about John M. Perry’s performance?

It sounds forced and artificial.

Would you try another book from Tom Haase and/or John M. Perry?

The level of detail, suspense, and dynamics.

The best I can describe it is that he sounds as though he's out of breath and crying throughout the book. His voice constantly breaks - at many points the characters "sound" different that the what the events portray. The only reason I'm completing the book is because I'd like to know the outcome. This is the first in a series. I haven't checked yet, but I am hoping he doesn't narrate the books that follow; not sure I can take it.

Could you see Secret of the Thorns being made into a movie or a TV series? Who should the stars be?

I could watch it on TV... not sure who'd do the acting.

This is not a great book per se, but it grows on you. I think developing the principal characters more at the beginning would be helpful, as this is clearly the start of what might be a long series.

If you’ve listened to books by Tom Haase before, how does this one compare?

My first. May not be my last, but I wasn't overly impressed.

Not bad. Did the best he could with some clunky scenes and sometimes maddeningly juvenile dialogue.

Could you see Secret of the Thorns being made into a movie or a TV series? Who should the stars be?

Shouldn't be. Maybe on SyFy, with no stars.

This is the debut of a new series, and is well researched, but it never clicked totally for me. Yet, I did finish it, which says something. It is so so, but for fans of biblical history, it is likely better than my rating.