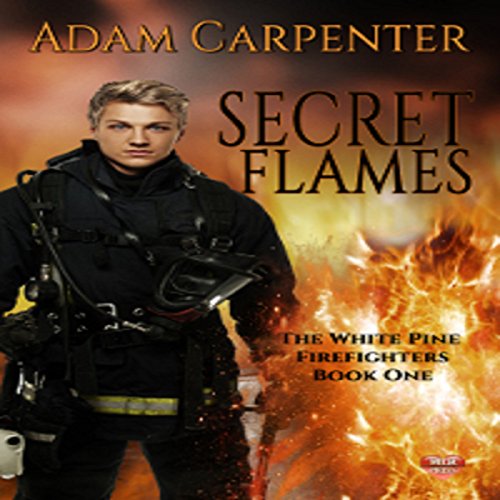 The men of White Pine have their secrets. Trent Rogers prefers not to talk about his past, but the mysterious, half-naked man who stumbled into his secluded cabin can't even remember his own name. On personal leave from the White Pine Fire Department, Trent wishes he could escape his mistakes with such anonymity. Secluded together, each buries their emotions by indulging their wildest fantasies.

Angel Montero is the new firefighter come to fill Trent's place, who in no time displays his bravery during a particularly fierce fire. Angel also catches the eye of blonde-haired stud Austin Walker, a fellow fireman and Trent's ex. Neither man can douse the fires that rage between them, and before long they are embroiled in a heated affair.

These men are unknowingly connected by a deadly tragedy, and it is only after another suspicious accident that they begin to piece together their secrets to find the truth.

Set in New York State's Adirondack Mountains, Secret Flames is Adam Carpenter at his hottest and steamiest, where men love men with unabashed heat, and where desire is so hot it burns.

And the winner for most awful narration goes to...

The story is OKish but the narration is simply awful! For crying loud, the MCs are supposed to be in their 20s. Yeah, right!!! The narrator is obviously middle-aged bloke. Before you buy this book, please imagine hot M/M action scenes read to you by your grandfather. I am sorry, Jackson Hunter (super cool name BTW), you are not a bad audio artist but I don't think explicit gay erotica is your calling. 🤔