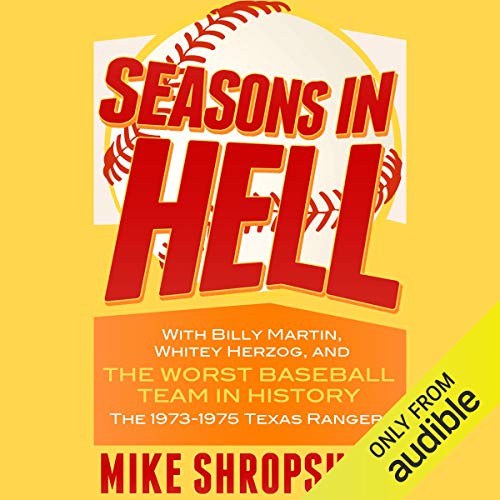 By: Mike Shropshire
Narrated by: Peter Powlus
Try for £0.00

You think your team is bad? In this landmark work on one of the most tortured franchises in baseball, one reporter discovers that nine innings can feel like an eternity. In early 1973, gonzo sportswriter Mike Shropshire agreed to cover the Texas Rangers for the Fort-Worth Star-Telegram, not realizing that the Rangers were arguably the worst team in baseball history. Seasons in Hell is a riotous, candid, irreverent behind-the-scenes account in the tradition of The Bronx Zoo and Ball Four, following the Texas Rangers from Whitey Herzog's reign in 1973 through Billy Martin's tumultuous tenure. Offering wonderful perspectives on dozens of unique (and likely never-to-be-seen-again) baseball personalities, Seasons in Hell recounts some of the most extreme characters ever to play the game and brings to life the no-holds-barred culture of major league baseball in the mid-'70s.

What listeners say about Seasons in Hell

What made the experience of listening to Seasons in Hell the most enjoyable?

A laugh out loud account of the (often crude) antics of players, coaches, owners journalists and many associated with America's National Pastime. All in the context of a team that flopped egregiously then improved only to flop again! Informative and entertaining.

What made the experience of listening to Seasons in Hell the most enjoyable?

Hilarious story and attention keeping delivery. If you followed baseball in the 70's or 80's you will be familiar with the characters. Things used to be simpler and unchecked and the way these guys lived and carried on is very entertaining.

especially for baseball fans of a certain age. some weird mispronunciations but good fun

This book is a mess

Written in an inappropriate flowery prose style, the writer fills the entire book with so many homophobic statements of his own, and of the players he's writing about, that I lost count. Despite the very dated writing style and many offensive attempts at homophobic humor, I finished the book. It potentially deserves a re-write to remove the author's own homophobia and place that of others in the context of the times. In any event, it's nothing more than a mildly interesting time capsule with an overly extravagant writing style. The pervasive homophobia clinched the 1-star rating.

just how much I liked this book; the ending was nice and there were a lot of cultural touchstones I could relate to but there was far too much reference to the amount of alcohol the author consumed. I know this was the seventies but you wrote it like you were Dan Jenkins imitating Ernest Hemingway. His reaction to a survey he read concerning whether or not he was an alcoholic; as someone who has worked with the population, trust me dude, you were an alcoholic. His takes on the 10 cent beer night riot in Cleveland and Rangers managers Whitey Herzog and Billy Martin were interesting. I know I write this in every review I do on books about sports, but could you please find a narrator who either knows something about sports or failing that, will learn how the athlete's names are pronounced. If you happen to be a baseball aficionado, or have fond memories of the seventies you might enjoy the book, other that I don't know if it's what even baseball fans would enjoy very much.

A slice of history

Trying to educate myself on Rangers history. The book was entertaining. After you tubing the writer, he s good ol boy with an oppinion. I am curious about the accuracy of the time and style of this era, in reguard to player behavior. How sexualized everything was, as well as drug use ect. Not sure if I would recommend the book or not.

A must for baseball fans

I'm full of Rangers lore so I love this book. A must for baseball fans!

Not much baseball here

Way too much juvenile discussion about the author's drinking habits. Unfunny, uninteresting. I gave up on ig around Chapter 7.

As a fan who endured the seasons and the franchise in question, I enjoyed Shropshire’s memoir and imagine that the bulk of it, other than verbatim conversations, is pretty accurate. The flaw in the audiobook is the narrator’s failure to even try to get the pronunciation of the names of people and places right. Is there another intelligent person in America who cannot pronounce “Spokane”? An hour or two with a Texas-based baseball fan could have kept this guy from mangling dozens of people and place names. And “hotel” with the accent on the “ho” is fine for Hee Haw but not for an audiobook.

What would have made Seasons in Hell better?

Having a narrator who at least has minimal knowledge of the game of baseball would have prevented the numerous cringe-inducing mispronunciations.

Whitey Herzog. He managed to maintain his sanity while dealing with this cast of misfits and eventually became one of the game's greatest managers.

Who would you have cast as narrator instead of Peter Powlus?

If you could play editor, what scene or scenes would you have cut from Seasons in Hell?

Most of Shropshire's references to his drinking exploits seemed a bit unnecessary.

The mispronunciations from Powlus made this a painful listen.