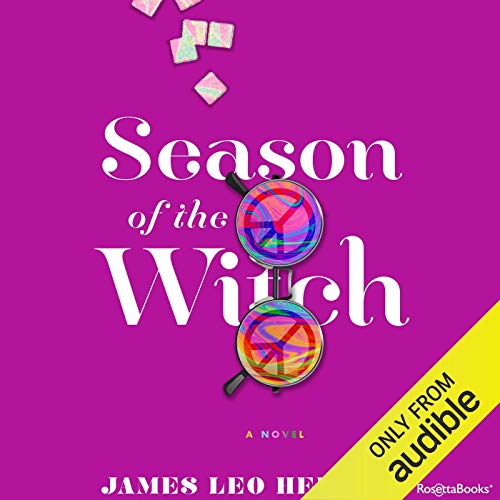 Season of the Witch

By: James Leo Herlihy
Narrated by: Sarah Mollo-Christensen
Try for £0.00

“One of the best and most convincing novels written so far about the lifestyle of the Woodstock generation.” (Publishers Weekly)

It’s the fall of 1969, and Gloria Random’s best friend John has been called up for the draft. To escape it, they decide to run away from their Midwest town and their mundane lives. Renaming themselves Witch and Roy, they head to New York City in search of Witch’s biological father. Landing in the East Village, they are pulled into a community of drug use, mystical rituals, and sexual experimentation as they try to hide deeper and deeper from the realities they left behind.

James Leo Herlihy’s third novel captures the mood and grooves of late-60s New York at the height of the anti-war movement and the counterculture revolution. With his trademark wit and insight, Herlihy brings together a colorful cast of characters ripped right from the heart of one of the most turbulent eras in American history.

What listeners say about Season of the Witch

The narration brings this truly to life, however the book itself has a lot to offer, depth, interesting ideas, great characters that are believable.
A lot of the time I only listen to books without a great deal of depth for amusement, but this is both fun and stimulating of thought, asks a lot of questions and answers some.

Certain ideas, such as the decline of capitalism into merely making money so one does not need to work or trying to grab without producing anything of value have been seen in UK politics. Ed Milliband, for example and even Theresa May to a degree. There is a validity to those arguments, although fixing the problem is less simple.

The idea of limited drug use intended to raise one's spiritual state. There is an element of workability in that although it can be a risky thing to do. But it is better than what happens today, where drug use is rife and uncontrolled by any idea of spiritual betterment.

I have a certain sympathy for the ideas of this time. The idea of being at peace and comfortable with other people, of a deep-close, supportive community. It is easy to ridicule 'hippies' or 'peace signs' and the like, but although a revolution didn't occur, there is something to learn from it. In this story the main character can be said to become an adult in the process. It starts with making her own decision to leave and ends with her working out what's right and true for her.

Today, the idea of abundance is just as relevant - adequate, food, shelter for everyone. Even in the UK, record numbers have nowhere to live. Over years house prices have been allowed to rise without adequate building and now even renting easts up huge amounts of a person's wage. Working more, and having less and yet governments are terrified to stop selling weapons to dodgy regimes.

One can say that counterculture was an attempt to fix this kind of thing, albeit that it didn't perhaps provide more than interesting experiences to people in the end.

For a book that is so distinctly "of its time," the spiraling end of the hippie era, the performance of Sarah Mollo-Christensen is absolutely fresh. Her characters are distinct and heartfelt. Her narrator, "Witch" never veers into parody-- even with vocabulary that describes angel-colored auras, peace marches, "can you dig it?" and "Far out!" It sounds like she means it and isn't making fun of The Brady Bunch.

Anyone who appreciates a strong searcher off to find herself in the big city will love this.

Loaded with a lot of filler

Season of the witch is a very strong and vivid depiction of life in the 1960s, post Woodstock, even though the story mostly spans a period of 2 to 3 months.

The voice acting is phenomenal but the story suffers in a lot of ways.

There are lotta chapters that are unnecessary and I feel like our filler. Either just descriptions or lists of things going on; at the end of the book there are a bunch of chapters that are out of order chronologically, usually there’s more set up and build to that.

There is a Lotta great character description, because the book is basically journal entries on this woman and her experiences in the late 60s. Also it really touches on a lot of social issues at that time: parents leaving their children without paying child support, Draft dodging, people believing the younger generation is delusional about creating world peace, their place in America, the hippie culture, the drug culture, people on drugs and the free love culture.

The author wrote midnight cowboy and when I first read this book out consider this midnight cowboy 2. I don’t like how it’s the same story about a person going to New York City with a goal and a bunch of setbacks and delays. However, this is a very strong self discovery and a person standing by their own identity piece. It’s also a very powerful thesis on how people in the 60s thought they were so advanced and close to solving issues as violence and political corruption, the same way we struggle with this in the 2020s. It’s really a good mix of older characters knowing what reality is and younger characters thinking that they’re making a huge impact on reality by protesting, being involved in drugs and finding their own spiritualism through drugs. But also warnings about how when were young we can’t hope that somebody is going to save the world and everything is going to change quickly, when things are taken hundreds and thousands of years in humanity to change.

This really fits into a period piece genre and also the coming of age genre. It is really good about showing what characters want, the emotions and what’s going in their head through their drives and love.

I think for anybody who wants to write a book and makes it a few hundred pages, some authors do that because they have such a Fanbase that they can do what they want, and sometimes people are contracted to make really long books, You always have to think about quality. You also have to know when you are throwing so much into a book that it doesn’t make sense or it comes off as filler and lengthening things without adding to the story. I understand older books were meant to be very long, but what this author does to add a lot of chapters they are not there is very Beneath his potential.