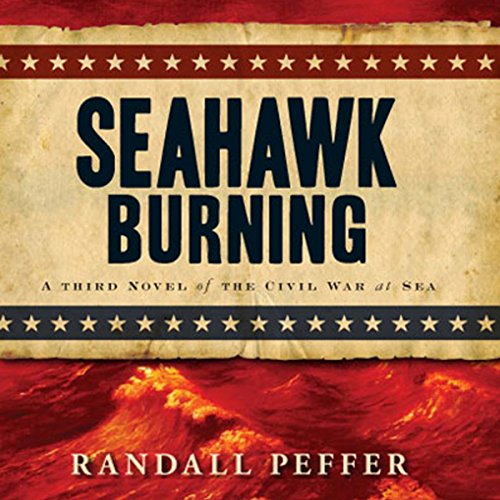 This final volume in the Raphael Semmes trilogy of Civil War naval thrillers, Seahawk Burning follows the real-life adventures of Confederate Captain Raphael Semmes and his ship, the C.S.S. Alabama, on the final legs of their reign of terror on the high seas.

The novel chronicles Semmes's rise to mythic stature as he becomes Lincoln's public enemy number one, seizing and burning scores of Yankee ships in the Caribbean Sea, the south Atlantic, the Indian Ocean, and the South China Sea before heading to France for sanctuary...all the while dodging scores of federal Navy ships pursuing him.

Enemy vessels, spy games, mutinies, storms, and loneliness stock Semmes's cruise during 1863-64. Meanwhile, back in the Lincoln White House, Secretary of the Navy Gideon Welles tries to marshal his warships to catch Semmes and simultaneously protect his president from spies and assassins, one of whom is Semmes's mistress.

In addition to the main characters, the cast of Seahawk Burning includes historical figures from the governments and navies of the North and South as well as the Black Moses, Harriet Tubman, John Wilkes Booth, and his fellow conspirators.

All of the threads in this saga come together in a final showdown off Cherbourg, France, when Semmes decides to take the Alabama into battle against the U.S.S. Kearsarge, captained by his old friend John A. Winslow. It is one of the greatest naval battles in history.