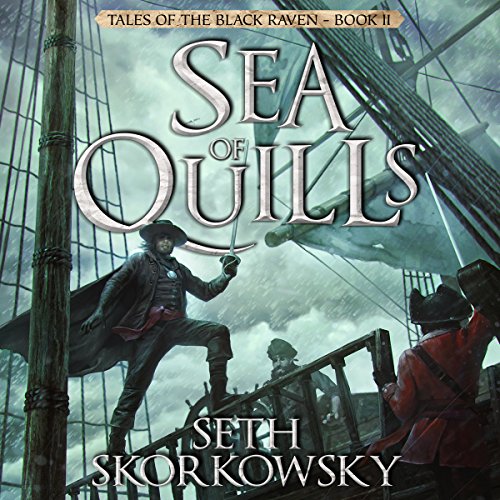 For Ahren, it's no longer a question of someone trying to kill him; it's who will try next. Still on the run for a murder he didn't commit, Ahren adapts to life as an outlaw as his reputation of the Black Raven grows. Yet nothing comes easily. Dogged by bounty hunters, he finds himself crossing steel with pirates on the high seas and battling monsters in subterranean cities. If that wasn't enough, he's paid to assassinate an immortal and must break out of a heavily fortified prison. Just another day in the life of the Black Raven.

Sea of Quills is the second book in this collection of tales by Seth Skorkowsky, the author of Damoren and the best-selling Valducan urban fantasy series.

What listeners say about Sea of Quills

The Black Raven returns with more exploits and stories to entrance a reader in his devious and occasionally nefarious exploits in assassinations and burglary. Steeped with the beautifully descriptive world and just a hint of magic with reappearances from previous characters it is a wonder to read. Definitely surpassed expectations. One gripe is I would have loved to see more come of the end parts of the shadows arc from the last book.

Another home run from Skorkowsky and Bray!

The combination of Seth Skorkowsky's outstanding writing and Bob Bray's great narration is enough to sell me any book. This collection of Tales of the Black Raven is a Sequel to Mountain of Daggers, another really excellent book. The Black Raven reminds me a lot of Shadowspawn from the Thieves World anthologies. A thief willing to kill when necessary, confident in their abilities, with legendary reputations. The stories in this book take place all over, and deal with some old characters, as well as some new ones I hope to see again. The action is fast paced, with solid plotting and worldbuilding that is excellent, really letting you get a feel of the envitonment. The characters are all well done, especially The Black Raven, Arhen. Whether on sea or on land, there is no situation Arhen can't eventually work his way around. Any fans of tales involving a charming rougue, such as the aformentioned Shawdowspawn stories, shold really enjoy this. Bob Bray's Narration is spot on as always, really bringing the characters to lives of their own.

I am enjoying everything about this series. Terrific story and a flawed, but lovable main character. Seth Skorkowsky just keeps giving us what we are looking for in these books. Loved it!

Another great anthology following the ever elusive Black Raven!

Seth Skorkowski has, yet again, given us a great anthology following the adventures is the Black Raven. I particularly like how Ahren always finds a way to use his environment and the items at hand to finish his jobs and vanquish his enemies. His cleverness is his real skill I think, and I hope we see a full length novel in the future!