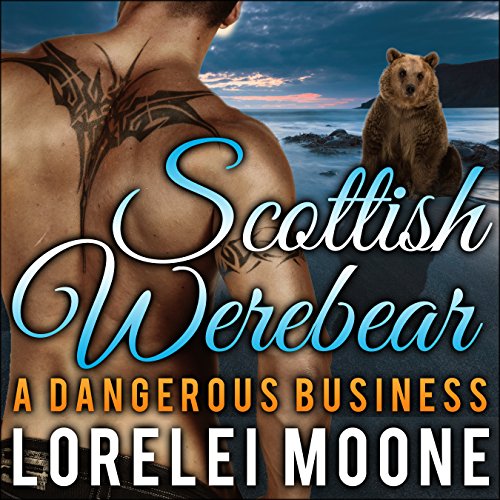 Aidan McMillan is a bear on a mission. Together with a group of like-minded shifters called the Alliance, he's uncovered the existence of one of the most infamous concepts in shifter history/legend: The Sons of Domnall, a secret society of humans sworn to destroy all shapeshifters. One of their cells has popped up in Edinburgh, and the Alliance is set on infiltrating them somehow. Meanwhile, he's also investigating the death of his parents years ago. Everyone says it was an accident, but was it really?

Heidi Blackwood, the daughter of her pack's alpha, has been sent to work with Aidan and the others in order to hunt down the Sons of Domnall and neutralize the threat they pose to wolves all over the world. When they first lay eyes on one another, they know right away: they're meant to be mates. Although Aidan smells unlike any wolf she's ever met, she doesn't yet realize that he's the one thing she shouldn't look for in a mate: a bear, one of the wolves' natural enemies.

Can they stay on task long enough to successfully fight the Sons of Domnall? Or will their complicated feelings for one another throw a spanner in the works before it's all said and done?

This paranormal romance novella is the second in the Scottish Werebear series. Although each part stands on its own and can be heard out of order, you'll get more enjoyment out of them if you listen to them one after the other.

This audiobook was given by the author at no cost in exchange for an unbiased review.

Short Story has it all ~ Romance, and Suspense!

This short story is well rounded and has a good mix of romance, suspense and action. A Dangerous Business is the second book in the series and while it could be listened as a stand a lone, the story is actually richer after listening to the first book in the series.

This novella is well written and flows fairly smoothly. There's immediate attraction between the main characters; however, they try to deny their feelings for each other. Their interaction and dialogue is clear and developed. Due to parts of this story running parallel to the first book, it feels more like a serial than a complete story.

I've listened to the first three audiobooks and because each story builds off the prior story, the plot and characters are developed and the plot thickens with each story.

These stories are great if you are looking for a super quick listen.

I received this audiobook in exchange for an unbiased opinion.

Book 2 in a series of shifter shorts. This can be a standalone, but builds on the 1st book in which Aiden's brother finds his mate. Here, Aiden continues to work against the bad guys who plot to eliminate the shifters when his new recruit triggers his mating instincts. What a shock for him to discover that, not only is she not a bear but she's a wolf, and this is (at the very least) looked down on. Add to that, she's been taken by the Sons of Domnall, who are described: "They present themselves as ordinary right-wingers, racists and bigots." (Given that the US is divided right down the middle politically, I'm not sure that delivering an unprovoked slap to the faces to 50% of your audience is advisable.) Aside from that, the story is much in the same line as the first, a short, sweet mate matchup with a setup for the next one which will feature Aiden's boss, Jamie.

Narration is good, in spite of the missing Scottish accents. These are a nice option for when a short listen is in order.

I received this audiobook in exchange for an unbiased review.

Intriguing story of werefolk working together to unmask and disarm a group of skinheads dedicated to eliminating shifters. All this is complicated for a long term member who discovers that he has been fated to be mated to the newest member and that she is a werewolf and he is a werebear. Good story and interesting characters.
Patrick Blackthorne is excellent as Aiden's narrator.

I think I might want a Bear, LOVED the story!

I was givent this book for my unbiased opinion and let me just say that I love shifters so i mean this book worked for me. It was short but full of drama and some hotness was thrown in for good measure. I am very pleased with the writing style of Lorelei Moone so she has gained a fan in me. This book has substance and if you haven't read the first one don't worry you won't be lost but why not just read them all. I recommend this book to all my fellow shifter lovers!!

Intriguing with a unique shifter twist.

Aidan McMillan is a bear shifter, from Rannock, living and working in Edinburgh with the Alliance. The Alliance is made up of shifters for the purpose of putting an end to the secret society known as the Sons of Domnall. This group is made up of humans whose sole purpose is to rid the world of the shifter population.

Aidan has left his family’s farm in the hands of his brother, Derek, and is determined to find and stop the Sons of Domnall from their mission, but he also has another agenda. Finding the person or person(s) who, he believes, murdered his parents.

Heidi Blackwood is a werewolf, and the daughter of her packs Alpha. Her father has sent her to Edinburgh to take part in the Alliance and their mission to eliminate the Sons of Domnall. She is stunned when Aidan greets her at the front door of the Alliance and she realizes that he is her mate. She recognizes that there is something different about him, but cannot put her finger on what that difference might be.

Heidi proves to be a valuable asset to the Alliance and eventually works her way into a meeting with the Sons of Domnall and the story takes off from there. Can Aidan find the hideout of the Sons, can he and Heidi truly be mates? These are just a couple of the mysteries to be solved in this novella.

Again, this is a novella, so a very quick, but thoroughly enjoyable listen/read with plenty of action, emotion, and heat to keep the listener/reader interested. The characters are strong and fully fleshed out, drawing you into their world and lives. I’m looking forward to the next story in the series.

What a great new series

I enjoyed this new shifter series. It has it all romance, humor, and hot sex. The narrator did a good job. This audiobook was given by the author, narrator, or publisher at no cost in exchange for an unbiased review via Audiobook Boom.”