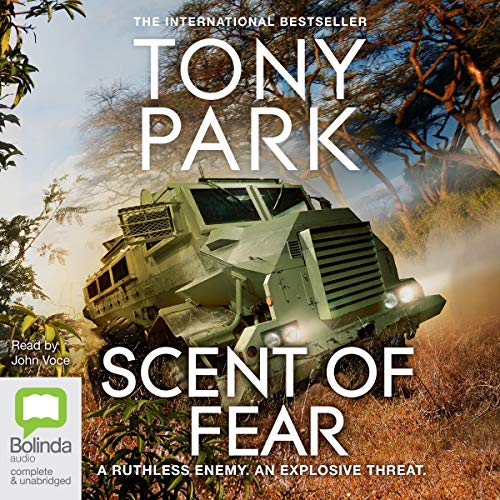 On a routine anti-poaching patrol, Sean and his tracker dog Benny watch in horror as overeager rookie Tumi Mabasa is almost killed, and her dog gravely injured, in the explosion.

Along with Tumi and best mate Craig Hoddy, Sean is determined to hunt down the elusive bomb maker who has introduced this destructive weapon to the war on poaching. But Sean is his own worst enemy. Haunted by nightmares of the war and racked with guilt from driving away his ex-wife, Christine, he soon discovers she and Craig in the midst of an intense affair.

And there's another enemy at play....

As bombs target Sean's unit, can he get himself back on track and win the fight for Africa's wildlife - and Christine - before it's too late?

What listeners say about Scent of Fear

Another great story from Tony Park. Such a shame that they can’t find a narrator who can pronounce the South African words and place names, especially when they are used repeatedly, like boet, which was used many times, was pronounced ‘boat’ every time. Hoedspruit and Nelspruit also sounded terrible.
Please why can’t they make a point of the pronunciations before reading, if they can’t find someone who knows how to speak the lingo! It’s hard on the ears, and spoils an otherwise enjoyable book.

I have read and really rated all of Tony's books and although I thoroughly enjoyed this great insight of the use of Tracker dogs in the fight against poaching, I felt this book lacked some of the drama and colourful action of previous books. It took awhile to realize that this was Tony Park writing and not someone else. Sorry Tony but I still loved the storyline, the brilliantly researched information and of course the great characters. As always, I await the next book.

Would be even better if nonRSA narrators would get RSA pronunciation help. Boet not boat.