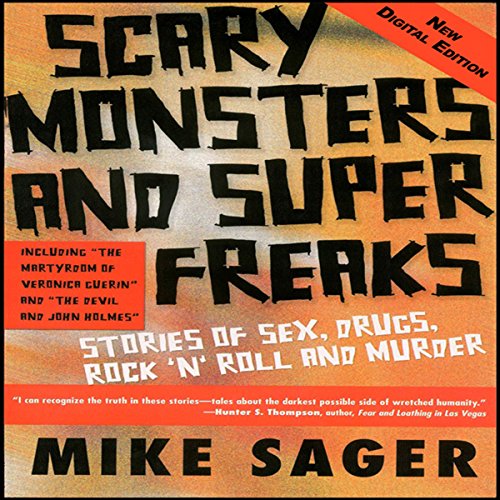 George Orlando needs to invest in a dictionary!!

The stories were interesting yet I found them to be told in a one sided manner, however, the odd thing about it was that throughout nearly each piece the author would flip his sides/takes. Obviously, most stories aren't black and white, yet I found the author wasn't capable of writing in "grey"...perhaps the tone of the reader takes some of the blame?? He was awful, more on him later..

I think they were all fairly interesting, some more annoying than others thanks to the readers attempt at various dialects...the Rodney King and Savannah stories for example, he gave me douche chills.

Where do I start..I could be here all day, but instead I will simply state the most obvious and inexcusable, his butchering of pronunciation. For example in the DEA story he actually pronounced "tryst" as "tr-EYE-st" ...that one, after a series of others, actually lead to me turning the book off and having to take a break..otherwise I may have smashed my phone. I am so disgusted that this terrible reading managed to see the light of day..how can countless mispronunciations, incorrectly read names and so on make it past an editor?? How do I get this job? I can read and do lame accents as well, but I also know how to pronounce words properly...

Was Scary Monsters and Super Freaks worth the listening time?

Despite the reader, yes, it was.

The narrator is easily the worst I have encountered, thus far,in my career as an Audible listener..however, taking a shot every time he mispronounces a word or screws up a name would make for a brutal drinking game at the wild audiobook clubs I like to imagine existing in smaller towns across America. George, I feel embarrassed for you...Tryst? You botched TRYST???!! Please feel free to point out all my spelling and grammatical errors..just keep in mind I am "no pro" and my only editor is my iPhone with its spiderweb cracked screen ;-)

First of all, if you're going to have a title like "Scary Monsters and Super Freaks", you'd better have some INCREDIBLE stories contained therein. There aren't any. Not one.

The "Super Freak" is a reference to Rick James. Ok... seriously?! I was expecting stories about all sorts of depraved, terrible individuals that committed unspeakable acts....and you give me RICK JAMES??!! That joke would ALMOST be funny, if i didn't value my time and money.

There are some good stories in here. Nothing great, and certainly nothing that lives up to that title. There's one about Rodney King which was interesting, and a few about cult figures, that I found noteworthy.

Overall, I feel incredibly misled by the title of this book. It takes every ounce of self control I have for me NOT to give this 3 stars. Based on the fact that the narrator is good, and some of the stories were actually memorable, I'm giving it 4. In truth, it's a 3.5. Had I not been misled so badly by the title, I'm sure my view of this book would've been more favorable.

Get a narrator that has:
a.) at least a passing familiarity of the subject matter;
b.) the slightest command of vocabulary and pronunciation;
c.) the names of the protagonists/characters in the pieces.

What other book might you compare Scary Monsters and Super Freaks to and why?

Who would you have cast as narrator instead of George Orlando?

Anyone who can properly read the language.

Not at a theater, but definitely on cable - maybe even PPV.

It is amazing to me - unbelievable, actually - that this recording was even made public. I know everyone makes mistakes sometimes, but this was ridiculous. It was odd at first, then funny, then it just became infuriating. I can't listen to this for more than a chapter or my head will explode. I believe audiobooks usually have Director that helps guide the performance - no evidence of that here. At the very least, I would expect that the publisher has someone perform some type of Editor function and at least listen to the thing before it hits the shelves - nope. I don't know George Orlando and I don't want to pick on him - he actually has a very good voice - but come on, dude! This was nuts.

I was hoping for salacious and shocking moments, but really, these stories are pretty tame.

Would you recommend Scary Monsters and Super Freaks to your friends? Why or why not?

Maybe. It's a very casual listen, and best in small doses; one story per listen.

Did George Orlando do a good job differentiating all the characters? How?

Was Scary Monsters and Super Freaks worth the listening time?

I skipped a few of the stories because the subject or character did not interest me.

Doppler traffic and Cornflower Blue Eyes. Keep this in mind while listening!