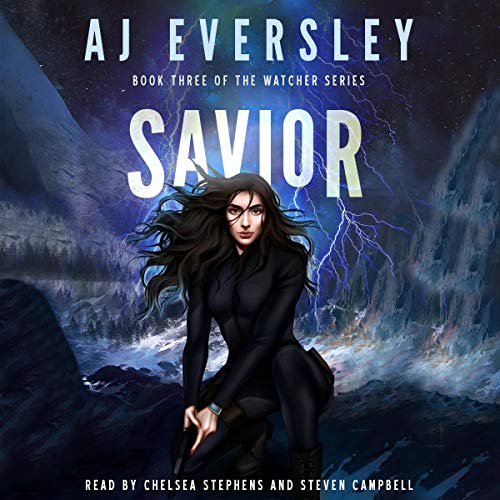 “Even I cannot outrun death. It chases me into darkness and can’t find the light. But he is coming back, and we will need every weapon we can find. And if that means turning to the one person who has caused me so much pain, just to save them all, I will do it...and it just might break me in the process.”

With the inevitable return of Coleman looming, Sawyer knows their army is not enough. On a journey to convince an ally to join their war, Sawyer discovers why the stars have placed the fate of the human race in her hands, but can she accept her destiny even if it means working with the man who tried to kill her?

Kenzie is her enemy. He’s tried to kill Sawyer more than once, and the control Coleman has over him will not fade. Yet, she can’t stay away from him. Both drawn to each other in a way neither can explain, they must learn to trust one another as well as themselves if they want to survive. And soon, Sawyer will find that she doesn’t just fight for humanity's survival but her own as well. If she wants to live, she must first face the darkness.

One choice saved them from enslavement. One bond created a weapon to fight back. Now, one destiny will reach the stars.

The epic conclusion of the Watcher series will decide the fate of the entire human race.

better than book 2 for whatever that's worth

Overpowered teenagers that somehow is more competent than people around them who spent decades specialising in their field...
actually managed to keep the teenage angst to a reasonable level till 5½ hours into the book...

Chelsea and Steve are the redeeming parts of this book... they are a joy to listen to and is what kept me listening till I got to the end...

great end to the series

I really enjoyed this entire series, I highly recommend giving this a listen.

I very much enjoyed this book. I was bummed to realize this was the conclution to a trilogy, and not an ongoing series. That aside, I think the author and narrator did a fantastic job creating a world and characters that you come to care about and root for. The story is put together well and this is a great listen. I highly recommend it.

A Fitting End to This Trilogy

It’s So Nice to Have a Real Ending to a Trilogy… I’m being a bit dramatic since I read books that are much longer series than three and I never complain (I usually ask for more). But when it comes to YA Dystopian books – it’s nice to have the three book series. There’s a definitive beginning, middle, and end. The series allows you to button up everything without wanting or needing more. Eversley knocks that out of the park. I wasn’t sure everything was going to be tied up in the end but the last 30-45 mins really cleared a lot of stuff up.

Savior is sort of the “epic final battle” combined with the typical love triangle. You get the satisfaction of both of them coming to an end but you have to read Savior to figure it out (no spoilers here).

I know that this series was written for YA’s and that the typical age of the characters is 18/19 but there were still a few parts that I would think “really?” Not that it took away from the story, just a few things/times that someone would say something and I would think “nah, you wouldn’t know that already in life”. But, then I stopped to genuinely think about it (and again before writing this) and I remember back to that age where I thought I knew everything and no one could tell me differently.

I think that this rings true in this book (and series). The characters make mistakes that an adult wouldn’t. They act on impulse and utilize their full emotions when thinking about things. That’s something that normal non-YA books are missing. They’re missing that hope and that life lived without being majorly hurt yet.

Overall, I really enjoyed Savior. I knocked it a half point for some small and minor things but the series overall was enjoyable even though the series wasn’t really for me. Every time someone asks what they should pick up if they are a YA fan – I’m going to recommend this series especially because of how satisfying the last part of this book really was.

Also, Chelsea Stephens needs to get more work. She did a fantastic job narrating this series. She made the characters believable and really brought her A-game to The Watcher Series. Steve Campbell, while not in the final book all that much, also has a really enjoyable YA voice that made listening to this series a breeze.

Fantastic end to the series

I love how the world and the characters in this book are so much more than cardboard cutouts. The characters all had their flaws which made them all the more real. The performance was great and kept me not only engaged but completely into the story. This book was good enough to make me go out and buy the rest of the series. I received a free copy of this audio in return for an unbiased review.

Perfect Ending to a Great Series

I absolutely loved this entire series and although I hated to see it end the author did a fabulous job completing it so all questions were answered. The narrators were brilliant in bringing the characters & story to life. I highly recommend this series

Such an amazing ride.

This series has been absolutely amazing! Such a crazy roller coaster of action and emotion. I’m sad the series is over, but I’m glad it ended how it did.. thank you so much to AJ Eversley for creating such a work of art, and thank you to both Chelsea Stephens and Steve Campbell for such an amazing performance! I absolutely loved it!

This is a Fantastic series that would definitely make a great movie series. The Author has done a fantastic job at bringing this to fruition. The Narrator brings. Out the Characters fantastic as well. This is more than A 5 star read.
Shauna Joesten

built on the first of the series and intensifies

The Book Junkie Reads . . . Review of . . .SAVIOR (The Watcher, #3) . . . When the narration team was chosen for this series it was spot on. The story(ies) in themselves were great for me. Having them all made it all the more intense, intriguing, adventurous. Just plain more. Having a duo narration time from start to finish gave you a sense of familiarity. The down side of things was this was suppose to be the last in the series. I could have listen/read this series through more adventures. Sawyer was just all that and some. She took on girl power and made it more.
This series is highly recommended by me for a way to bond with your YA's or a way to draw a little younger crowed in to see the adventures they to could experience with a book. I got my ten year old son to listen with me and he really liked it. I asked for more audio books like this. I am excited.

I can't say it enough the narration pair did it. The trading off of the dual POVs. Their voices together made the entire series feel engaging. The listening experience was a vivid movie playing. I loved the series. I loved the narration.

I received this audiobook as part of my participation in a blog tour with Audiobookworm Promotions. The tour is being sponsored by AJ Eversley. The gifting of this audiobook did not affect my opinion of it.

Really enjoyed this series. Narration was fantastic and story kept me guessing. Highly recommend for any dystopian or SciFi fans.

The very last of the Watcher series was just about perfect. Things work out,no matter what. Chelsea Stephens and Steve Campbell were very good narrators. I was given this book by the narrator,author or publisher free for an honest review.

If your streets and the buildings around you were all empty, how would you react? It would be quite lonely, one would imagine–if you were one of the only humans left, fighting against robots for the survival of the human species? That is a lot of pressure for one person to have. Eversley continues nears the journey to an end with this third installment, one of science fiction and adventure which will pull readers in quickly and keep them hanging on every detail.

Sawyer is hanging on by to the small chance that her and her people will survive Coleman’s wrath along with his hundreds of thousands of armed carbons. Her only chance of defeating him once and for all is to enlist help from some unlikely groups in order to build up an army against him. As if the odds weren’t skirting on impossible as is, there is now a new threat that has come to the world that Coleman has created, a disease that is airborne and rapidly infecting carbons. Sawyer and Kenzie head back to an old and abandoned location in the heart of her homeland, only to find that there are carbons that have been mutated or transformed into black scaly creatures straight out of their nightmares. Not fully understanding the effects of the disease, Sawyer becomes infected and must find a way to bring the war to Coleman in order to save not only the ones that she loves, but also herself from turning into one of those hideous, carnivorous reeks. Time and power are against Sawyer in every way imaginable, but the stars tell all. Do the stars show her imminent death and the death of all of those who she has fought so hard to protect?

Eversley has a superb story-line, filled with creativity, world-building, and originality. We’ve all heard and seen science fiction novels and movies, but Eversley brings a new twist to the fold. The pace is quick and steady from the beginning and carries through the entirety of the story. She provides that urgency to understand the depth of extinction the human race faces. Since this review compliments the audiobook, both narrators did fantastic work with voice relay. The scenes were vivid for the imagination and characters were credible. This is the third and final installment in the Watcher Series, so it is recommended that readers do read or listen through the first and second installments before diving into the this final one. If you are interested in action and science fiction, this may be a perfect fit.

An audiobook was provided to Turning Another Page by Audiobookworm Promotions and in no way affects the honesty of this review. We provide a five-star rating to Savior by AJ Eversley.